The Road to Raleigh: Checkers Bounce Back During Tough Four Game Stretch

Share All sharing options for: The Road to Raleigh: Checkers Bounce Back During Tough Four Game Stretch 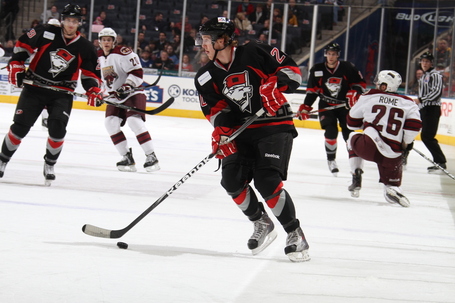 (Riley Nash skates with the puck against the Hershey Bears, via Gregg Forwerck)

After picking up five out of six available points on a three game homestand last week, the Checkers looked to stay hot with the final game of a three game set with Albany, before taking to the road to play three games in as many nights on the weekend. This rough stretch featured division rivals in Binghamton, Adirondack, and Hershey- all on the road. No easy task for sure, but how did the Checkers fare? With Jerome Samson and Brett Carson out of the line-up, would Charlotte have enough firepower to drop the Senators and Bears who they are currently fighting with for position atop the division? Find out after the jump.

Charlotte knew that this four game stretch wouldn't be easy. The Albany Devils seem to play the Checkers tough every time the two teams meet. The Senators are currently surging, and have tied the faltering Norfolk Admirals. The Phantoms are a team that has no quit in them, and the Hershey Bears are always a tough opponent, especially inside of the Giant Center on a Sunday. Leaders such as Zach Boychuk and Bryan Rodney would have to shoulder many leadership responsibilities in a stretch like this at this time of year, and they did just that.

Sadly, no postgame quotes this week. After the rough looking shutout loss against Albany at Time Warner Cable Arena, I was told the team wouldn't be running postgame commentary. Which was probably a good idea for my sake. With road games, there is no post-game commentary run by the team. Stay tuned for next week's after matchup's against the Whale.

With the win over the Bears on Sunday, the Checkers begin to close the gap on Hershey. The Bears were red hot, but have been cooling of late, allowing the Checkers to seize the opportunity and gain some ground. The Bighamton Senators have effectively hung around all year, and have finally made a move and drawn to dead even with the Norfolk Admirals. The Syracuse Crunch have slipped into the East Division cellar after winning only three of their last ten games. The Senators are officialy hot, winning seven of their last ten, and getting a point in one of their three losses. The Admirals are slipping, winning three times in ten tries, but also gaining three points from overtime and shootout losses.

* Justin Pogge had rough results this week. He was saddled with losses in both games that he started, allowing three goals on 28 shots in a shutout loss to Albany on Tuesday, and six goals on 42 shots in Binghamton on Friday.

*On the flipside, Mike Murphy picked up two wins in two starts. Murphy stopped 37 of 39 Adirondack shots in regulation and overtime, and stopped five of the seven Phantoms shooters in the shootout to rally Charlotte to a 3-2 win on the road. Murphy also stopped all 20 Hershey shots in what was the Checker's first shutout of the season.

* The Checkers special teams posted a 3 for 17 powerplay effort, and allowed three powerplay goals on 18 opponent's chances this week.

* Mike Murphy did more than just stop pucks this week. He added a rare goaltender assist. Murphy and Dalpe were credited with assists on Drayson Bowman's powerplay goal against Hershey on Sunday.

* In the shootout win against the Phantoms, Drayson Bowman, Jacob Micflikier, and Zach Boychuk all scored in the shootout. Boychuk's goal was the deciding tally.

* Speaking of Boychuk, he dished out three assists this week.

* Defenseman and captain Bryan Rodney scored and added two assists against Hershey and was named the first star of the game.

* Jacob Micflikier scored once and tallied an assist. The goal was his 22nd of the season.

* Chris Terry enjoyed a good offensive week, with two goals and three assists to his credit in four games.

* Brett Sutter scored a goal this week, his 8th of the season.

* Great to see Nicolas Blanchard rewarded with a goal after doing what he does best- grinding it out on the fourth line. Blanchard's tally this week was his fourth of the season.

Seeing the offensive explosion by Bryan Rodney against Hershey was inspiring. The two-time AHL allstar has shown consistently good play as a powerplay quarterback for a Checker's powerplay that runs four forwards and one d-man. Rodney has a nice shot, and has shown great leadership qualities this season in his role as captain. Zach Boychuk has been showing his passing skills in picking up three assists, and the Checkers desperately needed two wins after being shut out by Albany, and dropping a road contest to the Senators. The response was grand, with an exciting road shootout win and an effort against Hershey that proved to be the team's first shutout of the season. As pointed out in player updates, Mike Murphy was in net for both Charlotte victories, while Justin Pogge was saddled with two losses. Coincidence, or proof that the younger Mike Murphy may be gaining more confidence and improving his play as the year goes on? You decide.

The Checkers will get Monday off, but return to action on the road against the Syracuse Crunch on Tuesday. As highlighted previously, the Crunch have been dismal of late as they have plunged into the eight hole of the East Division. Charlotte must see that game as a must win, before they return to action on the weekend for another back-to-back-to-back set. Games against the Connecticut Whale on Thursday and Saturday are broken up by a road match against the Norfolk Admirals on Friday night. This is a big week for the Checkers, the Admirals are a familiar opponent, while the Whale are a little more unfamiliar. The Whale occupy third in the Atlantic Division with 62 points- 8 less than the Checkers. The Crunch have 44 points, 26 less than the Checkers. Three out of four this week would be very acceptable for Charlotte.

In response to last week's question about Zac Dalpe's favorite non-hockey sport, he did indeed state that golf was his favorite sport other than hockey. Ohio State's athletic profile site has him on record saying just that.

This week, let's look at Bryan Rodney. The Checker's captain won a memorial cup in his days in junior hockey playing in the OHL. He was on a cup winning team with which OHL hockey club?

Pictures were hard to come by this week for me. Look for more pictures highlighting the events of this coming week to appear on the next Road to Raleigh. Everyone have a fantastic week, go Canes and Checkers!