The Road to Raleigh: Checkers Pick Up Points During Tough Stretch

Share All sharing options for: The Road to Raleigh: Checkers Pick Up Points During Tough Stretch 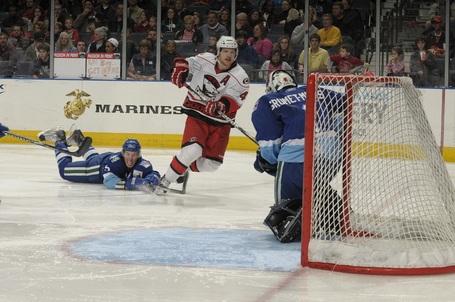 (Zack Fitzgerald forces the Whale goaltender to make a save, via Charlotte Checkers)


No one said that this stretch the Checkers have been on would be easy. Playing seven games in nine nights is never an easy task to complete, but that is what the AHL has demanded of the Charlotte Checkers. After going 2-2 last week, Charlotte looked to continue to pick up points during an important part of the season. After a road match-up against the Syracuse Crunch, the Checkers faced a tough stretch that saw them play the Whale at home, take to the road to face Norfolk the next day, and then come back home for a rematch against the Whale.

Despite wacky and difficult scheduling, the Junior Canes were able to keep picking up points. Leading the charge was the suddenly red hot Mike Murphy, and a trio of Checkers forwards who have begun to find their stride late in the season. More details after the jump.

The Charlotte players and coaching staff talked about how tough and crucial this stretch of seven games in nine nights was. Everyone knew that this stretch would be a test. Perhaps this week's slate of games would help determine if the Checkers had the stamina necessary for a deep playoff run. Perhaps if the team faltered, it would signal that major work would be needed. As it turned out, the Checkers stayed composed and earned six out of eight points this week.

* Checkers goaltending was very good this week. Mike Murphy had a phenomenal week after recording the first shutout of the year for Charlotte. Murphy was in net for both wins this week, allowing just one goal on 55 Connecticut shots in two games. Murphy also suffered a shootout loss to Syracuse before recording another shutout in front of the record breaking crowd at Time Warner Cable Arena on Saturday night

* On the flipside, Justin Pogge suffered a shootout loss on the road in Norfolk. Pogge was peppered with shots. Justin saved 50 of the Admiral's 53 shots. Solid goaltending was a huge part of the third period rally by Charlotte.

* Drayson Bowman had three goals and two assists this week. The young winger has been skating with more confidence of late, as he has upped his goal total to 12 after struggling to score in the first half of the season. Bowman has been rewarded with more ice time over the past few games.

* Zach Boychuk added two assists to his totals this week

* Bryan Rodney had a goal and three assists this week. Rodney's goal was one of the three third period goals that helped tie Norfolk to force overtime on Friday. The allstar defenseman was also a +5 this week.

* Chris Terry scored three times this week including twice against the Whale on Thursday night.

* Oskar Osala and Nick Dodge remain out with injuries

* Michal Jordan left Saturday's game in the third period, updates when they become available. Bryan Rodney was also stung after blocking a shot, but did not miss any shifts.

* While the Checkers as a team struggled in the shootout, Zac Dalpe scored the lone goals in both skills competitions. Dalpe has shown consistently good breakaway moves all year, which has carried into the shootout.

* Mike Murphy made several incredible desperation saves this week. Perhaps it's the fact that he's significantly smaller than Pogge, but Murphy seems to outclass Justin in ability to make incredible diving stops.

This week was a very important one for the Checkers. The team could have easily fallen apart when faced with such a tough slate of games, but they have held it together beautifully. Picking up points has been the name of the game for Charlotte of late, which is key when the playoff push is on like it is right now. The losses this week don't hurt too terribly much since a point was picked up both times on the road, but it would have been nice to get an extra point in one of the games. However, the team played very hard in home games against the Whale, and looked impressive in scoring five goals on Thursday night. After going down 3-0, Charlotte found a way to battle back in the third period against the Admirals, which is a sign of maturity and playoff readiness. The boys played just well enough to beat a chippy Connecticut team on Saturday night in front of a huge crowd. The fatigue stricken Checkers managed one goal from Pistilli (A rebound off of a Zac Dalpe point shot on the powerplay), and nursed the lead with lots of help from Mr. Mike Murphy. There is no doubt now, Charlotte is ready to see some playoff hockey. The push must continue in the next few weeks.

The Checkers will get some well earned time off, but then will face another weekend stretch of three games in as many nights- on the road. The squad will be tested again against solid competition in hostile enviornments.

If you said that Checkers captain Bryan Rodney won the memorial cup with the London Knights in 2005, you were correct! For this week, we will analyze the suddenly hot goaltender- Mike Murphy.

Mike Murphy spends a lot of time with one of his teammates. The two players love to attend charity events together, and cooperate well at practice. The chemistry is probably due to the fact that the two are roomates. Mike Murphy is close buddies and roomates with... 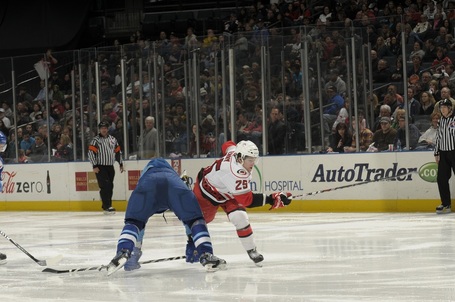 (Chris Terry skates against Connecticut on Friday night with a huge crowd watching, via Charlotte Checkers) 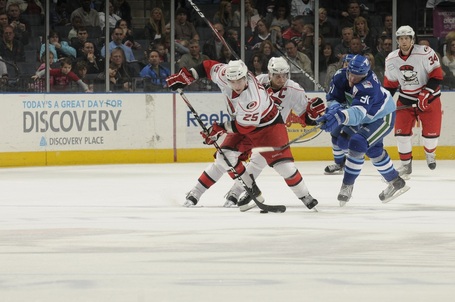 (Chris Terry skates through the neautral zone with captain Bryan Rodney following close behind on Saturday night, via Charlotte Checkers)