Share All sharing options for: Erik Cole Wins It In OT: Hurricanes 4, Thrashers 3

The Carolina Hurricanes and Atlanta Thrashers battled each other like they were playing for a playoff spot, if that is possible in February, and Carolina came out on top, 4-3 in overtime on Saturday night in front of 16,874 at the RBC.  Both teams now have 58 points, but the Hurricanes have more wins and technically have taken over the coveted eighth spot in the conference.

The Canes also have two games in hand.

The game was a wild, wide open back and forth affair with several penalties, powerplay chances, and outstanding goaltending, at both ends of the rink.

The Thrashers held a 1-0 lead after one period, but the Hurricanes tied things up in the second on a powerplay goal by Eric Staal when he put his own rebound past Ondrej Pavelec.  The Atlanta goalie had already made several fine saves, especially in the first period when he robbed Erik Cole at least twice.

The Canes jumped ahead 2-1, in the third period when Brandon Sutter zipped a perfectly placed shot past Pavelec on a rush.  It was Sutter's 12th of the season.  Jiri Tlusty got the primary assist.

Atlanta would tie things up a bit later on a long shot by Brent Sopel which seemed to have eyes as it made it past Cam Ward, through a lot of traffic.  It was another one of those shots which looked like it might have been tipped by someone.

Just 28 seconds later, Tlusty would get on the scoresheet again as he weaved his way through the Atlanta zone and beat Pavelec short side to give the home team back the lead.

The Thrashers pulled their goalie with a minute and change left in the game, and tied things up on another shot from the point which made it through traffic.  Zach Bogosian got credit for this one.

The game would go to overtime, the third time that's happened between these teams this season.  Each club had a few chances in the extra period, but after a nice save by Ward, Cole got a pass from Jamie McBain and took the puck in the Atlanta zone with a lot of speed.  He beat Pavelec with a wrister for the game-winner after out-racing the defense into the Atlanta zone.

The end was a fitting one for the winger as he had played a fine game and led the Hurricanes with seven shots on goal, while coming close to scoring a couple of times earlier.

The Canes will take Sunday off, then they are scheduled to practice at the Rec Zone Monday morning before they leave for their last long road trip of the season Monday afternoon. 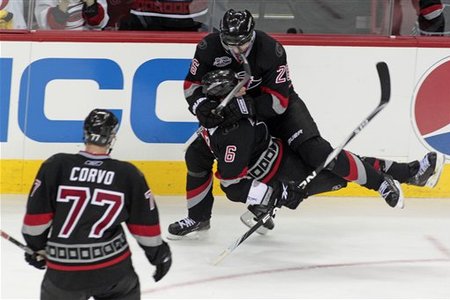 (Cole and Gleason celebrate after the game winner)