The Road To Raleigh: Home Cooking- The Appetizers

Share All sharing options for: The Road To Raleigh: Home Cooking- The Appetizers 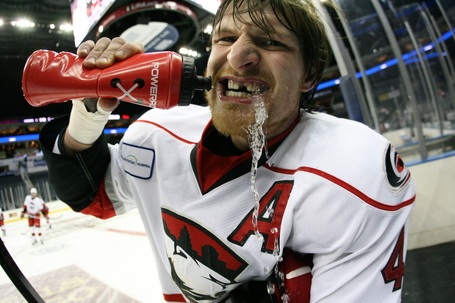 After a road trip that saw the Charlotte Checkers hover right around .500, a nice stretch of home games was exactly what the doctor ordered for a trip upwards in the East Division standings. With Zach Boychuk playing with the Hurricanes in the absence of Jussi Jokinen, All-Star forward Jerome Samson was asked to shoulder the scoring load.

After an AHL All-Star game performance that saw Samson notch three points (1 g, 2 A), Samson and fellow wingers found the back of the net multiple times this week, including seven times during a wild scoring fest that made a hero of the aforementioned Jerome Samson. Getting back to work after the All-Star classic started in TIme Warner Cable Arena, but in what way did the tide turn? All the details after the jump.

After a four game road trip that saw the Checkers pull of a 2-2 split, the team returned home to the comforts of Time Warner Cable Arena, and their first order of business was dealing with the rival Norfolk Admirals. The Admirals are one of the four East Division teams who need points this time of the year. Strangely enough, the home team had not won a game in the Charlotte/Norfolk series this season- until Thursday night when the Checkers reversed that trend.

On Sunday, all most people in Charlotte could think about was the superbowl hype, but the Checkers had other matters to attend to as they hosted a Providence Bruins team desperate for points as they begin to fade in the Atlantic Division race. The Bruins were shutout by the Worcester Sharks the night before. Catching a team on home ice that played the night before was an opportunity that the Checkers wanted to seize.

It's always a fun experience to be able to treat you loyal readers to a new feature. Together now everyone: "Hooray for new features!" In all seriousness, the new Road To Raleigh feature that I am proud to present is, post game quotes. After being asked by a team member here to do some video work, I was also asked to work some interviews for the post game quotes video series that the Checkers have started publishing on YouTube. Although you don't hear my voice, the questions the players respond to were asked by me, but the video was not edited by me. Enjoy hearing some good stuff from some of our prospects!

How about those Wilkes-Barre/Scranton Penguins all of a sudden beginning to fade? The long time holders of first place in the division are 4-6 in their last ten, and the Hershey Bears have creeped into first place contention going 8-1-1 in the same number of games. Surely having Dustin Jeffrey playing for the NHL Penguins takes a major toll on the scoring strength of WBS. With the loss of Malkin for the season, has Jeffrey found a permenant home at the NHL level? Jeffrey has nine points in 26 career NHL games. The Admirals are in a small rut, going 3-5-2 in their last ten. Salvaging a point against the Checkers was important for them on Thursday night. The Checkers sit in a tie with Norfolk for third place with the same number of games played.

* Mike Murphy was in net in Thursday's win against Norfolk. Murphy made 30 saves on 36 shots as he outdueled Jarsoslav Janus in a high scoring affair.

*Justin Pogge stopped the rubber for the Checkers on Sunday. He allowed three goals on 26 shots in the win.

*Drayson Bowman had three points this week (2 g, 1a). All three of which came in Sunday's game against the Bruins. HIs third period even strength goal ended up being a game winner.

* Jerome Samson scored twice and gathered three assists in his two games this week. Samson went down with a seemingly serious injury. He was escorted off the ice after he went down in the third period. From the looks of it, it's a concern with his leg. The Checkers will be keeping their fingers crossed for a speedy recovery. Samson has seven points in his last five and his 25 goals rank him third in the AHL.

*Jon Matsumoto had two goals and two assists. He was the first star of Thursday's game.

*Brett Bellemore was a +4 in two games, Michal Jordan was a team best +5.

*Opponent's powerplay's went 3 for 10 on Checkers penalty killing this week. Throw in two shorthanded goals by Matsumoto and Samson.

* The Checkers powerplay was 2 for 11 this week. Riley Nash and Drayson Bowman were responsible for those tallies.

*Brad Herauf didn't miss a beat with his toughness. He gathered a team high 22 penalty minutes, including two fighting majors, and a misconduct for unsportsmanlike conduct.

These two wins were exactly what the Checkers needed to keep pace in a very competitive division. Playing .500 hockey on the road on their four game trip was satisfactory, and beating rival Norfolk and a Providence team that is desperate, was a good way to follow up the road trip. Hershey is red hot right now, but with four straight coming up in Time Warner Cable Arena, the Checkers have a chance to put some distance between a Norfolk team that is possibly beginning to show signs of slowing down. If Jerome Samson is going to be out for an extended period of time, the Checkers will lose a ton of offensive firepower. Not only that, but Samson also kills penalties, and works the powerplay. Cedric McNicoll of the Florida Everblades probably makes the most sense as a call-up if Samson misses significant time. McNicoll played well in his short stints with Charlotte previously.

As mentioned before, the Checkers will play six of their next ten games at home. Their next four will all be in the comforts of home. Certainly good news for the Checkers. You have to look at the three games on the slate for this week and say they are all very winnable. A rematch with Providence will be on the schedule for Tuesday night, followed by a back-to-back against the Albany Devils on Saturday and Sunday. It will be Albany's first trip to Time Warner Cable Arena this season. A clean sweep of these three games would be great, but even taking two out of three, while hoping Norfolk continues to stumble, would be good too.

Last week's question asked about Oskar Osala's NHL experience. The Finnish winger has played in three NHL games in his career. He suited up for two games with the Capitals, and one for our beloved Hurricanes. Osala is yet to register a point at the NHL level, but the 23 year old has had a taste of the speed of the game at the next level. This week let's take a look at the head coach and his playing days.

The Checker's own head coach, Jeff Daniels, played some forward back in the 80's, 90's, and first portion of the 2000's. The Oshawa Ontario native was drafted by which NHL team in the 6th round, 109th overall, in the 1986 NHL Entry Draft?

The Week in PIctures: 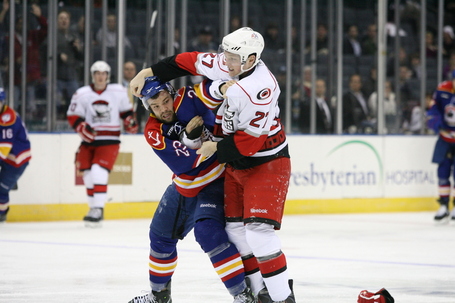 (Drayson Bowman, featured in a trivia question that discussed his willingness to drop the gloves as a member of the Calgary Hitmen in junior, shows us why that was the case as he finds himself in a scrap with defenseman Radko Gudas in the second period of Thursday night's game, via Gregg Forwerck) 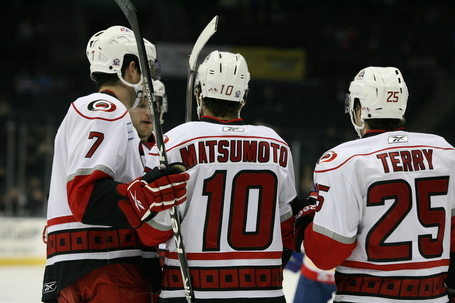 (The quartet of Charlotte penalty killers celebrate a goal- a shorthanded goal scored by Jon Matsumoto. Matsumoto got the back door feed from Chris Terry. After whiffing on his initial shot, Matsumoto lifted the loose puck into the net behind Norfolk goaltender Jaroslav Janus.) 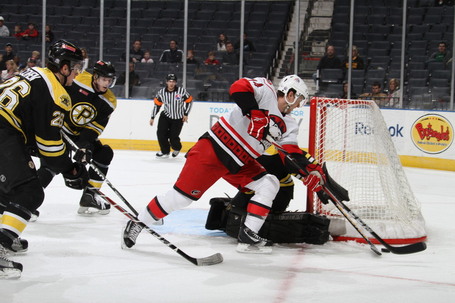 (Brett Sutter has been one of the highest scoring forwards on the team in the last 15 or so games, although he cooled off a bit this week. Sutter drives the net against Providence on Sunday, via Gregg Forwerck) 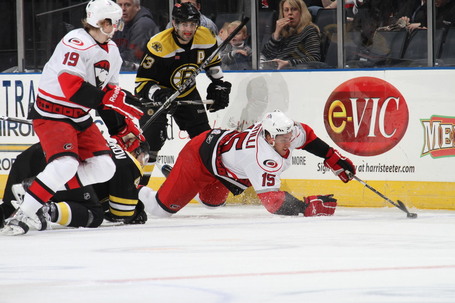 (Matthew Pistilli dives out for a loose puck against Providence. Pistilli has been a solid forward for the Checkers since being called up from ECHL Florida where Jared Staal resides. via Gregg Forwerck) 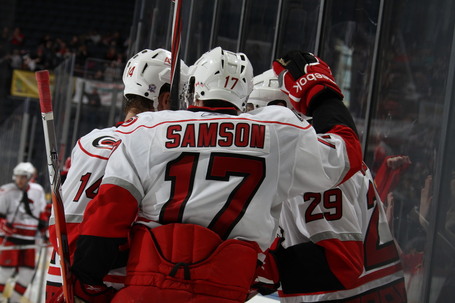 (Samson celebrates his team leading 25th goal of the season with his teammates. His goal came shorthanded after he streaked in on the penalty kill. This marks two straight games in which the Checkers have notched a shorthanded goal, beginning with Thursday night's tally by Matsumoto, via Gregg Forwerck) 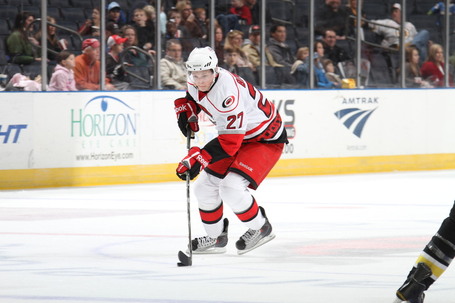 (Drayson Bowman had five goals going into Sunday's game. He enjoyed a nice offensive outburst against the Bruins that bumped his totals up a bit, via Gregg Forwerck)