The Road to Raleigh: Checkers Earn a Split

Share All sharing options for: The Road to Raleigh: Checkers Earn a Split 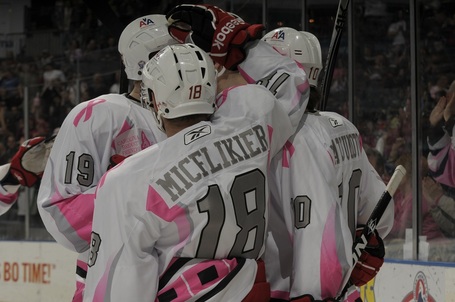 (The Checkers celebrate a goal on Saturday night in their "Pink in the Rink" sweaters, via Charlotte Checkers)

With the recent callup of Drayson Bowman to the NHL Hurricanes, the Checkers are missing two huge contributors of offense. WIth Jerome Samson already called up, the loss of Bowman would mean other support scorers would need to bring their best efforts to will the Checkers to victory in a key time of the year. The Binghamton Senators came calling this week, how would Charlotte respond?

A light week featuring home games at Time Warner Cable Arena was exactly what the doctor ordered for the travel depleted Charlotte Checkers. The Checkers faced two games against the Binghamton Senators, with rest in between the Tuesday and Saturday night affairs. Charlotte slipped by the Sens in the first meeting, but were edged in front of over 10,000 fans on Saturday night.

*In two games, the Checkers mustered only three goals this week

*Zac Dalpe had two points on the week. He scored his 19th goal of the season on Tuesday night. His shorthanded tally was assisted by Chris Terry and Brett Bellemore, and was the lone goal of the first period of play. Dalpe's assist came on the powerplay, showing the forward's skill when used in special teams scenarios.

*Jon Matsumoto scored twice this week. His 17th goal of the season came on Tuesday night, and broke a 1-1 tie late in the second period. Matsumoto's 18th of the season was the lone Charlotte goal in front of a packed house on Saturday night, it was a powerplay strike.

*Justin Pogge stopped pucks for both games this week. His win Tuesday night saw him turn away 38 of 39 Senator shots, while Pogge allowed three goals on 27 shots in Saturday night's loss.

*Brad Herauf got the lone fighting major for the week this week.

*The Charlotte powerplay managed one goal in ten powerplay chances this week.

*Zac Boychuk and Zac Dalpe had tough luck on Saturday night, as they were on the ice for all 3 Binghamton goals

It would have been nice to see the Checkers find a way to pull out the win in front of a large crowd on Saturday night. With points at a premium, you have to at least be thankful that Charlotte was able to take one from Binghamton in the tight game on Tuesday night. Jon Matsumoto proved to be a valuable asset this week, as he scored two of the team's three goals. Zac Dalpe chipped in too, but you can see that Drayson Bowman and Jerome Samson are very big parts of the Charlotte offense. The one game at a time approach needs to be taken here by Charlotte as the playoff race in the Eastern Division continues to tighten up. If the Junior Canes can take it one game at a time, and not worry about what Hershey or Norfolk are doing, this is a team that should have no problem making the playoffs in their first year in Charlotte.

The Checkers have 13 games left to play on the schedule. This week is busy, as Charlotte will play four times in five nights, all on the road. Things get started with two games against the Bridgeport Sound Tigers, then a Saturday night affair with the Syracuse Crunch, and finally a Sunday afternoon game against the Wilkes-Barre/Scranton Penguins.

This is a crucial point in the season. Charlotte needs to hold it together. This four game set is not easy, but they face another similar situation next weekend. Good goaltending from Murphy/Pogge will be absolutely critical, and scoring from the talented forward group will need to be more prolific than it was this week.

That's right, Casey Borer has won back to back awards for sportsmanship. The defenseman is actively involved in the community, and was even featured in the community spotlight segment on the Jumbo Tron in Time Warner Cable Arena.