Share All sharing options for: Reporting from the Red Carpet: 2011 Casino Night

It was another red carpet treatment for Carolina Hurricanes fans as the Kids 'N Community Foundation presented its 6th annual Casino Night and Wine Tasting on March 13, 2011. I was fortunate to be in attendance again this year, along with a number of Canes Country regulars who I hope will also weigh in with their stories and experiences.

The event is well-attended by Carolina Hurricanes players, coaches and staff, all of whom are accessible throughout the evening to participate in casino events and mingle with guests. This year everyone on the current Carolina Hurricanes roster was in attendance, including recent call-ups Jerome Samson and Drayson Bowman, and Jamie McBain, who participated although currently out of the line-up with an upper body injury.

The format of the event was consistent with tradition. Casino tables were set up for traditional games such as blackjack, roulette, craps, and Texas hold-em. Players alternated between two shifts during the evening working the tables and posing for pictures and autographs when not on duty.

In addition to the casinos, auction tables were set up with spectacular items available for silent auction bid. Each Hurricanes player created a personalized basket to be auctioned, and many really gave a glimpse into the unique personalities on the team. Joe Corvo's auction basket featured his-and-her bowling balls and tennis rackets along with a private tennis lesson. Cory Stillman's auction basket featured items for enjoying the great outdoors. Erik Cole's auction "baskets" are always elaborate and this year's was no exception (you'll just have to take a look at the photos to appreciate it). A number of All-Star Game related items were included on the auction block. And in keeping with the Oscars/red carpet event theme, a Hurricanes-themed movie posters were created specially for the event and were part of the auction. 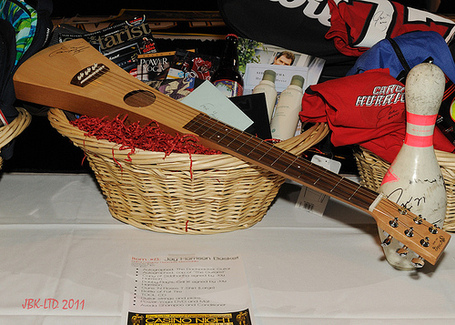 New this year was a "BidPal" system which allowed bidders to review and update bids electronically from anywhere in the arena instead of having to congregate around paper bid sheets. This technology seemed to work very well and several bidders commented on the ease of bidding from years past.

The evening's highlight is always the "high roller" live auction event, where big ticket one-of-a-kind items are up for bid. This year's live auction items included a trip with the team, an All-Star dinner with the Canes All-Star Game participants, a "year in jersey review" featuring jerseys from some of this year's unique events, and an afternoon of go-kart and putt-putt fun with Jeff Skinner and Brandon Sutter. The go-kart event bidding was intense and competitive, and led to a split decision where two bidders actually won. Skinner and Sutter were appropriately animated when they learned they were going to get to race go-karts not once but twice. 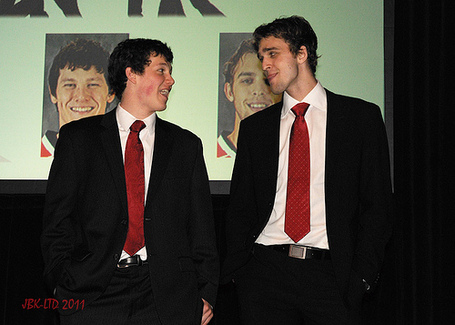 While it is probably not easy to put on a happy face during a losing streak with the post-season hanging in the balance, the players, as always, were gracious with the fans. The mood was fun and upbeat. Several of us took the opportunity to express our appreciation for the team's efforts this season, and the message was well-received and appreciated by all. To a man, each player is looking forward to the remaining games and the push for the playoffs.

Of course, the big winner of the evening is the Kids 'N Community Foundation, who raised somewhere in the neighborhood of $225,000 on the evening.

My photo album from the event can be found here. As always, it's a night to remember, and for a great cause.