The Road to Raleigh: Checkers Look To Celebrate An Early "Berth" Day

Share All sharing options for: The Road to Raleigh: Checkers Look To Celebrate An Early "Berth" Day 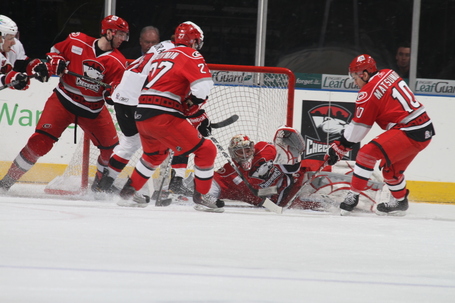 (Justin Pogge sprawls out to make a save with back up close by, via Gregg Forwerck)

Entering the Sunday afternoon matchup with the Norfolk Admirals, the Checkers knew that if they won and the Worcester Sharks fell to the struggling Adirondack Phantoms, a playoff berth would officially be theirs, in the month of March. The Admirals, who are fighting for their own playoff lives in the Eastern Division, knew the game was a must win. The week also featured matchups with the Adirondack Phantoms, Connecticut Whale, and Portland Pirates. With important points on the line, how would the Checkers fare?

Lost in the Checker's important playoff push, and the flurry of key games for our Hurricanes, is the NCAA hockey tournament. The journey to the Frozen Four featured Boston College and prospect Brian Dumoulin as a one seed. Would Dumoulin and the Eagles defend their 2010 championship? Another defensive prospect, Justin Faulk, found himself in the action as Minessota-Duluth attempted to knock off top overall seed, Yale. Checkers coverage and updates as always, plus a bonus look into the stats of Dumoulin and Faulk in the NCAA games. All of this after the jump.

After earning a 2-2 split last week, the Checkers hoped to elevate their game and keep pace with the Hershey Bears who they trail, and the Norfolk Admirals who are chasing right behind Charlotte. Chris Terry hoped to remain hot, and the loss of Mike Murphy to injury would force Justin Pogge to be the primary starter for the time being. The injury came at a bad time, as Murphy had elevated his game of late, and was ripping off wins and shut outs seemingly left and right. WIth Bowman and Samson already playing with the boys in Raleigh, would McNicoll and the other Everblade callups help push the Checkers to victory?

* With Mike Murphy on the shelf with injury, Justin Pogge got the start in all four games this week for the Checkers. Bobby Goepert was the backup for all four games as well.

*Mike McKenzie went down with an injury Tuesday night against Adirondack. After being hit with a blow to the head that resulted in a myriad of penalties, including a five minute game misconduct. It's a shame because McKenzie scored his first of the year in the first period to get the Checkers rolling. His line with McNicoll and Herauf was dynamite in this game, and Herauf played well enough to warrant being bumped up a line. He also scored a goal this week, his first of the season

* Zach Boychuk was a huge part of the success this week for Charlotte. In the four games this week, Boychuk gathered 10 points, (5 g, 5 a).

*Michal Jordan tallied 4 assists and was a +1 this week

*The Checkers powerplay enjoyed an 8 for 22 week. Good work by Charlotte. This effort includes a whopping four powerplay goal night against Adirondack.

*The usual suspects were up to fighting this week. Herauf, Sutter, and Blanchard all got fighting majors, plus surprise five minute fighting majors for Matthew Pistilli and Chris Terry.

The book is closed on what was a fantastic week for the Checkers. Picking up seven out of eight available points is great for the playoff race for Charlotte. Beating Adirondack at home was a game the Checkers couldn't afford to lose. Picking up a point in Connecticut was great, beating the Pirates who have already clinched the playoffs on the road was a great show, and the Checker's scoring sticks came to life in a key game against the Norfolk Admirals Sunday. With the Worcester Sharks winning, the Checkers could not clinch a playoff berth, but they put a little more distance between themselves and the Admirals. With five games remaining, it looks like mid to upper 90's in points will be where Charlotte will end up. If the season ended today, the Checker's first round matchup would pit them against the Hershey Bears. We will see how the season plays out, but with the play of Terry and Boychuk offensively, coupled with the grit of Fitzgerald and Herauf, and play in goal of Pogge and Murphy, one can't help but believe in the Checkers. This is a team that could do some damage in the Calder Cup playoffs, at this point, it's just a matter of who the first round matchup will end up being. Two big games loom against the Pens and Devils this week. The Pens long ago clinched the playoffs, and now have clinched the division. Charlotte may catch a team that is dogging it when it "doesn't matter" for them. The Devils have a chance to play spoiler, but the Checkers have had good success in close games against Albany this season. Two wins this week would be huge going into the final three games.

Hurricane prospect Brian Dumoulin and the Boston College Eagles couldn't defend their 2010 Championship as they were defeated by Colorado College 8-4 in the first round of the tournament. Dumoulin was a +2 in this game however, which tied him for the team lead in the game. In 36 games this season, Dumoulin collected 33 points, (3 g, 30 a).

On the other end of the spectrum, fellow prospect Justin Faulk and Minessota-Deluth were heavy underdogs to the number one overall seed, Yale Bulldogs. Justin Faulk was one of 4 MN-Deluth Bulldogs named to the 6 member all-tournament team. Yale began to unravel at about the midway point of the 2nd period on Saturday night. Down 3-0 in the second, Yale scored a big powerplay goal to creep within two. Just minutes later however, when Brian O'neill was ejected on a game misconduct penalty for an illegal blow to the head of MN-Deluth's, Jake Hendrickson. The call wasn't a good one. The Yale Bulldogs went on the five minute long kill, only to take another penalty half way through the kill, having already given up one goal. Justin Faulk and the MN-Deluth powerplay unit punished Yale with two big goals, they would nurse the lead for the remainder of the game.

After watching that long powerplay sequence, I really got a good look at Justin Faulk. He manned the point on the left side of the ice, and was a constant passing target from his teammates. The scouting report doesn't lie, Faulk has a cannon. His one timers screamed to the goaltender, sometimes going wide and bouncing off the lively endboards. One of Faulk's cannons nearly knocked the head off of a Yale penalty killer, envoking praise from the announcers, about how hard his one timer was. "Those one timers are always faster than a regular slap shot, Faulk nearly took the guy's head off there." "The freshman Justin Faulk has an absolute cannon there from the point." It was true. Faulk was insturmental in a powerplay effort that ended up being the difference in the game. In 37 games with MN-Deluth this season, Faulk has 30 points (8 g, 22 a), 6 of his goals came on the powerplay, and 2 of his 8 strikes were game winners. Help is on the way for the Carolina blueline fans, fear not. The offensive talent I saw on TV was excellent, if Dumoulin and Faulk can be defensively responsible at the pro level, we may have a scary future Tandem on our hands. More from MN-Deluth and Faulk, who have made the Frozen Four and will play the winner of Sunday's matchup of Notre Dame and New Hampshire

At this point, the Checkers have only five games remaining in their season. This week, we see only two of those five. A back to back on the road is on the schedule this week, as Charlotte will travel to Wilkes-Barre/Scranton for a Friday night matchup against the Penguins, and will then wind up in Albany to face the Devils on Saturday night.

ECHL Checkers and Hurricanes alumni, Dwight Helminen currently plays in the SM-Liiga. In 60 games this season with the Pelicans, Helminen has recorded 28 points (12 g, 16 a). Helminen played for the US Under 18 team, the Michigan Wolverines, ECHL Checkers, Hartford Wolfpack, Albany River Rats, Worcester Sharks, Carolina Hurricanes, San Jose Sharks, and the SM-Liiga Pelicans. Talk about a journeyman.

This week, let's take a closer look at the nationality of the Checker's roster. The overbearing leader in player nationality on the team is not surprisingly, Canada. Which country is the home to the second most Checker's players? Finland? Russia? USA? Sweden?