Paul Maurice Should Get One More Shot

Share All sharing options for: Paul Maurice Should Get One More Shot

The Carolina Hurricanes missed out on the playoffs by one game and some feel that heads should roll.

It all boiled down to one game, which they lost, so heads should roll.

Of course, head coach Paul Maurice is the focal point of the blame game and why not? Other than the owner and the general manager, he's the person most responsible for the performance of the team.

But before we overreact to the debacle which unfolded in front of almost 18 thousand diehard Caniacs in the final game of the season at the RBC, let's take some time to look at the broad body of work for the season.

Did the team improve?

One thing you want to see from your team over the course of a season is improvement, especially with a younger team. The stats seem to indicate that the team was improving.

Over the last month of the season, the team went 9-3-1, including an 8-1-1 stretch during a very important 10 game period when every game was vital.

Over the final 13 game stretch referenced above, the Canes scored 40 goals and allowed 30, for a difference of +10. Those totals include the 6-2 loss to the Lightning. If the Hurricanes could have performed at that same pace throughout the entire season, they would have had the best numbers in the East, GF 252, GA 189, DIFF +63.

Does it make sense to fire the coach immediately after he had the team playing the best stretch of hockey that they had played all year?

There are certainly some valid criticisms of the coach. He overuses some players, does not use his fourth line much, and the powerplay regressed as the season went on. But some criticisms could be looked upon as positives.

He continually mixed and matched lines through much of the season as he struggled to find line combinations that worked. But while that is frustrating to fans, an NHL season is somewhat like a long war. You have to lose some battles when you try to win the war, and the only way a coach can discover which combinations work, is to experiment and find out first hand.

During the final stretch, you'll notice that Maurice did not mix and match the lines, he kept them stable. Even as some lines struggled, he did not change them during the final grind.

Change for the sake of change

Some will look at his record and say, "ahh... career .500 coach. Why should next year be any different?"

But there are several coaches out there with worst career records and even more with no track record at all to go by. It would be a complete gamble to hire someone who has yet to coach a game in the NHL. And while the gamble might be worth it if you feel the coach has lost the team and it is floundering, is it worth it to take the gamble if the team is on the upswing?

Is it worth taking the risk when it's vitally important that the team make the playoffs next season?

Some want a change just for the sake of change, but coaching changes don't always work.

Case in point, the New York Islanders. This team has had three different head coaches, (Nolan, Gordon, and Capuano) in the last four seasons and still is in the rebuild phase, without benefit of a playoff appearance in any of the four years. Sometimes stability is better than change.

Atlanta has had two coaches in three years, without any improvement.

Of course, there are plenty of examples of how coaching changes have worked, at least temporarily, but there are no guarantees that a change will bring success.

Preseason prognostications and the "Skinner Factor"

At the beginning of the season, most experts around the league didn't give the Hurricanes much of a chance to make it to the playoffs. The funny part about this article is that if the Hurricanes would have won that final game, Maurice would be getting praised for taking his team to a higher place than many had envisioned at the beginning of the year. Instead, he's on the hotseat.

No one anticipated that rookie Jeff Skinner would light the lamp 31 times while having an exceptional all around season and that was a big part of the team's unforeseen success. But did Skinner have a blossoming debut season in spite of Maurice, or because the coach put him in positions to succeed with the right linemates? Should the coach be given credit, or blame? 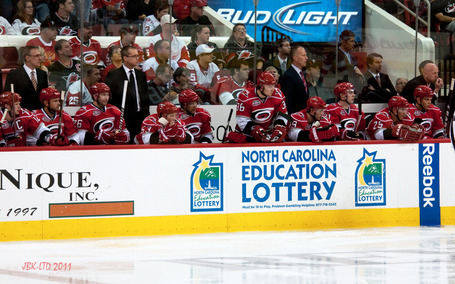 One thing about Maurice, he has surrounded himself with successful people, those of whom he could draw valuable advice and council from and he has not been too proud to use that advice.

Unlike most other teams, the Hurricanes had four coaches behind their bench for games. Associate Head Coach Ron Francis and Assistant Coach Tom Rowe started out handling the forwards and defensemen respectively, but during the season the decision was made to bring Tom Barrasso downstairs to join them. Barrasso was promoted from Goaltending Coach to Assistant Coach at the start of the season.

Recently, I asked Maurice why Barrasso was moved from upstairs to behind the bench.

"There were several reasons," the coach said. "First of all, when we started running Cam hard, I wanted someone behind the bench to let me know if he thought he might be getting fatigued, if now is the time. I yanked him early a couple of times. But I really wanted to be right, as far as Cam's mindset. I wanted to talk with him, (Barrasso) right on the bench, rather than on the radio. And sometimes you can't hear him very well on that."

The coach went on. "Also, there are different things to see. Ronnie's with the forwards, Tommy Rowe with the defensemen, but I like to match up certain things. The PK was struggling at the time, and I wanted there to be more interaction with the players. I didn't want to have Ronnie run down here and there, I just wanted to have more voices and more interaction and I think it's been a positive for our team. "

"Also quite frankly, we really like the way Tom Barrasso sees the game. Everyone has their own perspective from the bench. You have a Hall of Fame offensive player. You have a Hall of Fame goaltender who sees the entire game. Tom Rowe has played forward and coaches the "D". I've coached a long time, but we each have our own perspective. Sometimes I like to bounce ideas off of ideas because if I talk to Ron, I want to see if others see it the same way we see it. I want to make sure I'm getting as much good information as I can and I'm happy I did it."

Certainly, Paul Maurice is not coaching in a vacuum.

Long history with team a factor?

One has to wonder that if Maurice was a brand new coach when hired back in December of 2008, if he might be given more of a chance by many of his harsh critics. By the time the coach was fired after his first term, most fans were ready for a change while some absolutely demanded it. One problem with bringing back a formerly fired coach is that the same fans who did not like him the first time around, are not going to suddenly like him the second time. Especially if there is a lack of success.

Can an old dog learn new tricks? I guess it depends upon the dog, but Maurice does not seem so rigid that he is inflexible to new ideas. Why bring Barrasso downstairs if he wasn't interested in his ideas?

What's best for the team?

Putting aside whether you like the coach or not, and I have not seen one iota from anyone indicating that they didn't think Paul Maurice was a good guy, what is best for the team at this point? Bring in someone new and start from scratch? Promote someone from within with zero experience and roll the dice? Or bring back Maurice one more time and see if he can get the team playing at the start of next season, like they were at the end of this one?

My vote is to bring him back and allow him the chance to finish the final year of his contract. But if the team is floundering come December with a .500 or less record, Jim Rutherford should do what's best for the team and make a tough decision.

What do you think?