The Road to Raleigh: Checkers Clinch Playoff Berth In Their Old Home

Share All sharing options for: The Road to Raleigh: Checkers Clinch Playoff Berth In Their Old Home 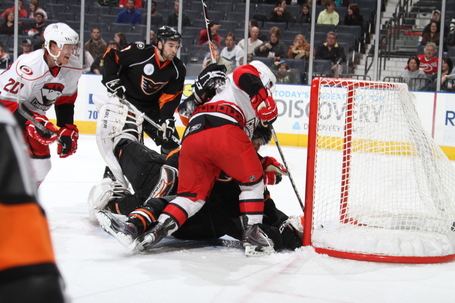 (This is how Jacob MicFlikier likes to work, via Gregg Forwerck)

The Charlotte Checkers in their first year in the American Hockey League, officially penciled their name into the group of six-teen who will be fighting for the Calder Cup in the playoffs this season. After dropping a decision Friday night, the Checkers scored five goals and knocked around the reeling Albany Devils to clinch a playoff berth in the building that guys like Zack Fitzgerald and Nicolas Blanchard used to call home, only a season ago. Plenty of drama to go around in two games this week. The players who led the charge, and potential first round Calder Cup Playoff opponents after the jump.

With two games on the slate, and chances coming left and right to finally shake the proverbial monkey and clinch the playoffs, the Checkers looked to pick up key late season points against the Penguins and Devils. These two games would be crucial, as they lead to the final three which will take place inside Time Warner Cable Arena. The usual suspects found the back of the net, but it was Jacob MicFlikier who led the charge for Charlotte, more on him after the number crunching.

On Friday night, the home team exploded out of the gate with 4 first period goals, which would prove to be the downfall of the Checkers this night. Just over five minutes into the game, the Penguins capitalized on a Zack Fitzgerald tripping penalty, as Jason DeSantis blasted a shot by Pogge for his first goal of the season. Nick Petersen scored his second of the year less than five minutes later, and Geoff Walker joined the fun to put the Pens in front 3-0 quickly. Jacob MicFlikier stopped the bleeding, at least momentarily, when he got a nice feed from Zach Boychuk and answered the Penguin push. Bryan Lerg however, would score a shorthanded goal in the last five minutes of the first, which killed the momentum Charlotte was working on generating. Corey Potter (5th of the season), and Keven Veilleux (10th), rounded out the scoring for WBS. Jacob MicFlikier would score a powerplay goal, and Zac DAlpe would notch his 22nd of the season. Zach Boychuk had an assist on all three Charlotte goals. Brad Thiessen turned away 22 of 25 Charlotte shots en route to his 33rd win of the season.

Boychuk had a hand in all three Charlotte goals. His game generally involves the playmaking aspects, and he showed it on Friday. Three primary assists were the story of his game.

MicFlikier had been in a bit of a scoring rut of late, but had a coming out party this week. In this game, he notched his 26th and 27th goals of the season as he pursues the first 30 goal season of his professional career.

Bryan Rodney played a great game, showing why he is a mainstay on the point both on the powerplay and even strength. His two assists came in the third period, as he and Boychuk asserted themselves offensively.

On Saturday night, the Checkers knew what it would take to clinch a playoff berth. Inside the Times Union Center, the Albany Devils prepared to play spoiler. All Charlotte needed was a point against the Devils, OR a Worcester loss. They got two points against the Devs, and a Worcester loss. Special teams was the story of Saturday's game, as both teams tallied three powerplay goals. The Checkers had 8 attempts, and the Devils had 7. The game was a slug fest until the Checkers pulled away late. Nicolas Blanchard opened up the scoring on the powerplay, McNicoll and Dalpe picked up helpers. The goal came just 3:13 into the first period, and silenced the home crowd. Steve Zalewski scored his 15th of the year, on the powerplay to tie things up just over two minutes later. Cedric McNicoll of Charlotte, and Chad Wiseman of Albany each scored powerplay goals, before Albany's David McIntyre broke the tie to give the Devils their first lead of the game. It was short lived however, as Jon Matsumoto answered three minutes later, with his 20th of the season, with assists going to Chris Terry and Casey Borer. With things all even in the third, the playoff bound Checkers took over the game. Matthew Pistilli, suddenly an offensive force since being called up seemingly forever ago, broke the tie with 2:49 left in the third. The dagger brought about a goalie pull, as Albany's Mike McKenna scampered to the bench, allowing Jacob MicFlikier to inch ever closer to the 30 goal plateau as his empty net bid went in for an EN/PP goal, his 28th of the year.

Pistilli scored only once, but it was probably the biggest goal of the season for the young winger and for the Checkers. His clutch third period goal broke a 3-3 tie, and set up an empty net scenario as Pistilli did his best impersonation of Erik Cole.

Matsumoto was a big part of the win on Saturday night. His +2 rating tied him for the team lead on this night with Chris Terry, and his second period goal was huge. The Devils were feeling all kinds of momentum after McIntyre's powerplay goal, but Matsumoto took exception and knotted things up to set up the heroic third period for Charlotte.

McNicoll scored one of Charlotte's three PPG's, and added an assist. The goal was McNicoll's fifth of the season, he has seven in ECHL Florida.

*4 assists, this week by Boychuk

* 3 games, remaining in the Checker's schedule, all of which are home affairs.

*5 points, behind the Hershey Bears is where the Checkers sit. WIth 6 possible points on the board the rest of the way, could the Bears lose out while the Checkers win out, allowing Charlotte to take the second division slot? Possibly.

* 4, 20+ goal seasons for Matsumoto as a pro, as he assured another one with his 20th strike of the season Saturday night. In every season in which Matsumoto has played more than 20 games in the AHL, he has scored 20+ goals.

*93 points, the Checkers currently sit at. With the potential to go as high as 99, where will the Checkers end up?

As seen in the standings, Hershey, Charlotte, and Wilkes Barre have all clinched playoff berths. The Admirals and Senators continue to fight for the 4th spot, while over in the Atlantic Division, it looks like the Worcester Sharks can see the end coming. Congratulations to the Penguins for their Eastern Division Championship, and capturing of the Kilpatrick trophy (AHL version fo the President's trophy) with a league high 113 points. The Penguins also secured a regular season Eastern Conference championship as they are assured of being the top seed in the conference and the team to beat in the AHL in the Calder Cup playoffs this year.

Good week by the Checkers overall. Charlotte got it done when it mattered in the third period of Saturday's game against Albany, as they were cool and collected in securing an inivitation to the 2011 Calder Cup Playoffs. The Checkers had a legitimate shot to knock off the high flying Penguins, but were doomed by the three goal outburst in the first period. WIth the playoffs now secured, it will be intriguing to see how the last three games go, as Norfolk is fighting for their lives, as are the Worcester Sharks, who occupy spots on the Checkers schedule in the coming days. With the playoffs locked up, the Checkers will need to keep their momentum, and be sure not to mail it in and lose their rhythm late. Boychuk, MicFlikier, and Pogge were all great this week for Charlotte.

If the Playoffs Started Today... :

If the playoffs started today, the Checkers would be the Eastern Division's third team. The first round matchup would be the Hershey Bears, and the Checkers, with Hershey having the home ice advantage as the division's second seed. The first two games and potential game 7 would occur in the Giant Center.

The other matchups would include:

Here is a look at the AHL's Calder Cup playoff bracket, as the qualification terms differ from the NHL. Since there are two divisions in each conference, four berths are given to each conference, unless the fifth place team in one division has more points than the fourth place team in the other division, which looks to be the case this season. Charlotte's own East Division looks to field 5 playoff teams, WBS, HER, CHA, NOR, and BING, as the fifth place Senators have more points than the Atlantic's fourth place Worcester Sharks.

The playoff process is confusing at first, and hard to explain in words. More information on qualification and AHL rules can be found at this link at the AHL's official website:

Three games remain in the season for Charlotte, and they will all take place in Time Warner Cable Arena this week. The Norfolk Admirals come calling on Monday, and then the season will close with two back to back games against the Worcester Sharks.

Since the Checkers just clinched the playoffs in their old Albany home, let's take a look at the old Albany River Rats for some nostaliga.

Which goaltender who used to stop pucks for the Albany River Rats, is the holder of the River Rat record for single season save percentage (.931), and goals against average (2.10)? Could current Hurricane backup Justin Peters be the holder of the records? Try your hand this week in the poll.