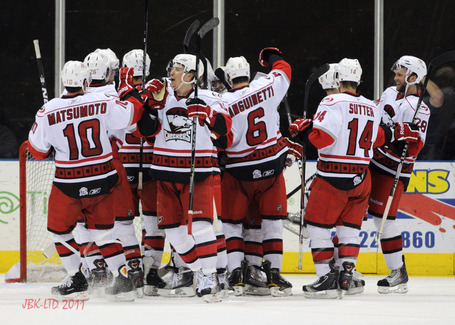 With the East Division Finals series between the Charlotte Checkers and Wilkes-Barre/Scranton Penguins tied up at one apiece, the series shifted back to Charlotte, where the Checkers prepared for the first of three home games on Monday night. After Jon Matsumoto led Charlotte to a one goal victory in game one, Brad Thiessen and the powerhouse Pens responded in game two, earning a shutout victory on home ice.

Monday's match-up inside Time Warner Cable Arena promised to be a thriller. The end result of an excellent tilt resulted in the Checkers getting a huge lift with an overtime win, and subsequent 2-1 series lead. Details after the jump.

After the puck drop just a shade after 7:00 P.M. Eastern Time, both teams were flying up and down the ice- as one might expect in a crucial game three in the Division Finals. AHl Goaltender of the year, Brad Thiessen was set for another duel with Charlotte's Mike Murphy. Both goaltenders were sharp through the first period, the only blemish on Murphy's period was a goal by the Chris Collins of Wilkes-Barre at the 13:23 mark of the first. Collins flew in on a mini two on one with Tim Wallace who found Collins with a nifty cross crease feed that Collins buried to give the Pens the lead. Despite three Charlotte penalties in the period, Charlotte went to the dressing room only trailing by one. The Penguins also held the lead in shots by six: 13-7.

Roughly half-way through the second period however, it was two of the more defensively minded forwards and alternate captains to boot who would answer the first period tally. Nicolas Blanchard started the chaos as he batted down a flying puck, which landed in the slot in front of an unsuspecting Thiessen. Charlotte's Nick Dodge streaked in and put the loose puck home to tie the game, electrifying the crowd of 3,735 in Charlotte. The Checkers outshot the Pens by six this period, and tied the shot count up at 18 going into the third period.

Both teams played the third rather cautiously. Neither team took many chances, and the only penalty was an interference call to Charlotte's Chris Terry. It was Mike Murphy who helped take the game to overtime however. The Pens fired seven shots at Murphy, while the Checkers mustered only two on Thiessen in the third stanza. Murphy was not rattled though, as he stood tall and helped to cap off a five for five night for Charlotte's penalty kill. The overtime period was up next, and you just knew whoever won would have a tremendous boost going into game four.

It didn't take long to crown a winner in the extra frame. Zac Dalpe and Jacob Micflikier got the assists on a huge game winning goal by Brett Sutter. Sutter controlled the puck at an extreme angle to the left of Thiessen, and after firing a wrister at the hot goaltender- the horn sounded. Sutter had found room... somewhere.. The home crowded erupted. The Penguins skated off with heads down after getting nipped by Sutter and the Checkers.

Game four will take place tomorrow night in Time Warner Cable Arena. Another 7:00 puck drop awaits. Will the Penguins respond after the home crowd cheered at their expense on Monday night? Will Mike Murphy continue his excellent play? These questions will be answered, all the details coming to you after the game!

Michal Jordan was a team high +2, on the ice for both goals.

Only three players on the roster were minuses: Faulk, Boychuk, and Rodney

Nick Dodge's 4 shots led the team, 3 by Brad Herauf placed him second on the night.