Between the Board of Governors meetings, the NHL Awards Show and Entry Draft, the release of the 2011-12 schedule, and rapidly developing stories on free agent signings, Carolina Hurricanes hockey news has been coming at us fast and furious over the last several days. In today's Clicks and Clippings, I've put together several links related to the draft and to the schedule for you to catch up after a crazy weekend. Tomorrow, I'll assemble news and stories about rookie Jeff Skinner becoming the youngest player to receive the Calder Trophy along with a few other pertinent-to-Canes-Fans links.

Let's begin with video of Jim Rutherford at the NHL Entry Draft in St Paul this weekend, sharing his thoughts after the final round Saturday.Tuesday morning update: this video with Rutherford has vanished from the interwebz - it was from the CanesVision set. I'll keep an eye out and repost if it pops up again. Sorry. So lets hear from Senior Scout Tony McDonald instead...

After the jump,links to Video, Audio, local and national stories on the newest members of the Canes system, plus more on the 2011-12 schedule, changes on what the League's divisions might become and more.

MacDonald on Day Two Picks At the conclusion of the 2011 NHL Draft, Hurricanes Director of Amateur Scouting Tony McDonald. including video.

Murphy Aims to Keep Following Skinner's Path In looking for the next Jeff Skinner, the Hurricanes went to the same place they discovered the first one. Mike Sundheim tweeted this image of Ryan Murphy's family (19 in quantity) that accompanied him to St Paul this past weekend.

Canes, Rask Have Options for Next Season The Hurricanes used their second-round pick on a European-based player, but it’s not clear how much longer he’ll remain there.

Canes Keep it in the Family With two of their second-day picks, the Hurricanes continued a trend of investing heavily in hockey families.

Your one-stop link to  the Carolina Hurricanes Video Center with all 11 Draft features are in one place.

And loads of excellent audio - mostly the Q&A's with local media over the weekend. Chronologically:

The best place to start is with the wall-to-wall team coverage here at Canes Country, from Blogmeister Bob Wage, who was in St Paul, and Cory Lavalette, who participated in all the calls back to media here in Raleigh:  Link to Canes Country's Coverage of the 2011 NHL Entry Draft

Hurricanes get defensive with Murphy A year ago, the Carolina Hurricanes used their first-round draft pick on a Kitchener Rangers forward who was lacking size but had serious offensive skills.

Lowe knows Canes' culture - Luke DeCock  He was just a kid back then, a 13-year-old rooting for his father's team to win the Stanley Cup, peering between the shoulders of the fans standing in front of him.

Canes wrap up NHL draft  What Carolina Hurricanes general manager Jim Rutherford was able to do away from the draft floor this weekend may be more important than anything he and the team did on it.

Other stats, opinions and backstories on the newest Canes

If you hadn't seen this yet, both Ryan Murphy (@ryanmurphy24) and Keegan Lowe (@klowe4) are on twitter.

Good draft for Kitchener-Kitchener Rangers- 570 News "I honestly can’t wait to get into that building (the RBC Center) and step onto the ice for the first time," Murphy says enthusiastically, despite admitting to being nervous about not being among the first ten names called. "I know Jeff Skinner loved it there and hopefully I can love it, too."

Hockey Prospectus | NHL Draft Wrap-Up: Southeast Division - the section on the Canes is free in the subscription site. Thoughts on Rask, Hofmann, Lowe and Mahalak as well.

"Wow" is all I can really say about getting Ryan Murphy at #12. I thought I saw a little hop in Carolina's step as they went up to the podium to make this pick. Murphy has top-end upside and while he has risk, Carolina's system is so loaded they can live with some risk. If he pans out, Murphy and Justin Faulk will terrorize opposing penalty killers for many years.

Sons make fathers proud at Entry Draft - NHL.com The draftees - David Musil, Dillon Simpson, and Keegan Lowe - will follow in their fathers' footsteps with an NHL career. Along these lines, a story from 2010 on Keegan and his father to help fill out his story: Keegan Lowe following in his father's footsteps

Not much out there on the Canes 4th round pick from Switzerland, but for reference, this was useful:. Eliteprospects.com - Gregory Hofmann's player profile. Also check out the pre-draft comments on Hofmann from SBNation PuckWorlds' Bruce Peters: 2011 NHL Entry Draft: Swiss Prospect Review

When teams go looking for a safe, dependable centre in the second round, as so many teams will, Hofmann should hear his name called. Hofmann is a great skater, better than Bartschi, and quite simply seems to be involved in every aspect of the play through sheer determination.

From Toledo, Hurricanes take Mahalak in 6th round of NHL Draft. This story includes a 1 minute TV news story about this selection as Mahalak calls in to discuss experience Saturday.

We also heard over the weekend that the dates for the Hurricanes Prospect Conditioning Camp are set for July 9 through 14. We'll be putting together a "Canes Country Guide," like we did last year, to print for reference, especially helpful if you are able to attend any of the skates. At this point we haven't heard where those might be taking place, with the RecZone under renovation. The Consensus best guess on the alternative site would be The Factory at Wake Forest.

Canes Country's Brian LeBlanc covered the new schedule here when it was released Thursday afternoon and, yes, it's already merged into the Canes Country Calendar, but here are some follow ups that merit a look:

NHL Super Schedule breaks down 2011-12 travel miles by team - On the Forecheck While NHL teams will face the toughest travel burden during the upcoming season?

Rangers to Play in Winter Classic in Philadelphia in 2012 - NYTimes.com The Rangers will play the Flyers in the league’s annual outdoor game on Jan 2, 2012.

Related news: Goodbye, RBC Center | newsobserver.com PNC CEO James E. Rohr said in an interview today that the bank is looking at putting its own name on the arena after the acquisition is completed, which is targeted for next March.

According to several reports, the NHL Board of Governors is looking at a radical re-alignment prompted by the move of the Thrashers to the Winnipeg. The most striking notion is that the League will be divided into only 4 divisions for reasons that range from time-zone optimization to promoting better regional rivalries. Here are a couple looks at what this might mean:

I got curious and put together some maps that explore some options over at Red Light District. NHL Mapquest: What might the new divisions look like? Not only will the conferences be re-aligned, but the entire structure of six divisions is apparently going to be revamped as the NHL tries to re-insert some Old Time Hockey rivalries and accommodate teams (like Columbus and Detroit) whose revenues suffer when their divisional opponents are not in the same time zone.

Another option was suggested to me later (thank you @ghesla), which I thought intriguing. (click to enlarge) 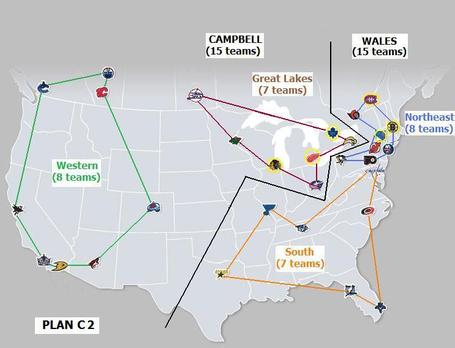 And the AHL is a-changing too, with affiliations and head coaches finding new partners. Start here with Ch-ch-ch-changes " Chirps from Center Ice for the current status of how NHL and AHL teams will be related next season. The Canucks hooking up with the Chicago Wolves is the most intriguing challenge to fan loyalties, no?. There's also some coaching news, which includes Kirk Muller [story], recently an assistant to Jacques Lemaire with the Canadiens, taking on the Nashville Predators highly-talented group in Milwaukee.

Finally, for a fairly new and very well done hockey blog that is guaranteed to make you smile, spend some time paging through NHL Players as Kids. Which, as the subtitle notes, is exactly what it sounds like. Can you top this?

Speaking of changes, a little tweak from a couple of us veteran Canes Country contributors you might have noticed already. After more than two years identifying ourselves as "LTD" and "hockeymomof2", Jamie Kellner and I will be using our real names when we post here. But if you still want to call me HM, I promise to answer to that too.