There is no question about it now. In less than 12 months with the Carolina Hurricanes, the one and only Jeff Skinner has built himself a permanent place in the lore of the franchise.

Some written accounts of the evening in Las Vegas last Wednesday

How I spent the NHL Awards ceremony - Mike Maniscalco, WRALSportsFan.com Then the best moment for me, in the hallway Dan Bylsma stops Jeff Skinner and tells him, "Well deserved." Along with a few more compliments on Skinners play. One of those instances where I love sports. In addition, Maniscalco posted this one-on-one [ AUDIO] with Skinner immediately following the Award.

Skinner wins Calder Trophy -  NewsObserver.com  On Wednesday, Jeff Skinner capped a special year by winning the 2011 Calder Trophy, given to the NHL's rookie of the year. He beat out forwards Logan Couture of the San Jose Sharks and Michael Grabner of the New York Islanders in becoming the youngest ever to receive the annual award.

After the jump, more on Skinner's big night, all the Awards Night voting (with appearances by Eric Staal and Cam Ward), several good videos (including Paul Maurice poolside in Vegas), memorable images looking at the aftermath from Vancouver and Boston, plus a few tidbits to follow up on the Draft, realignment and free agent news worth reading.

Here's the backstory on one of those coaches back home who Skinner thanked in his speech, Bill Bowler, his "skills coach": Calder Trophy winner thanks Maroons coach - Chatham Daily News, Ontario, CA

"There are a lot of offensive tactics and a lot of game situations," [Bowler] said. "Scoring goals at any level, any league, is very difficult. In my opinion, there's isn't enough focus on that."

Bowler considers himself fortunate to work with such a special player.

"Players like Jeff Skinner come along once every 15, 20 years, I'm guessing," Bowler said.

The Press' All-Star Teams and all your Vote Totals

And why this matters... When you check out the performance bonuses allowed by the CBA, you see there's more than bragging rights at stake. And you also see that Jeff Skinner pretty much ran the table. Calder Winner bonus: $212,500. Then his other accomplishments: scoring 20 goals (31, actually), 60 points (63), significant ice time, among team's top plus-minus, selected to All Rookie team. Sheez, no Conn Smythe yet? It's all spelled out here: How Teams Will Meet the Cap Floor | The LeafsNation

San Jose Sharks' Logan Couture loses rookie of the year voting to Carolina Hurricanes' Jeff Skinner - San Jose Mercury News "It hurt a little bit," Couture said of the moment Skinner's name was announced, "but I was honored to be here and proud of the year I had. Jeff Skinner had a great year, as well."

I thought this was an especially thoughtful story from Bob Condor, NHL.com Editor-in-Chief. Skinner credits teammates for Calder Trophy win - 2011 NHL Awards  It also featured this video of Skinner backstage with the lovely Heidi Androl. His response to the "lucky suit" question at the end is a guaranteed smile.

The 4th Period: Jeff Skinner Awards at the 2011 NHL Awards - as an example of how well Skinner handles less original and thoughtful questions from media (this was from Tuesday, prior to the event).

And It seems Coach Paul Maurice was the representative from the Canes organization who accompanied the rookie to Las Vegas.

The Canes have the Official Skinner Calder Winner T-shirts on sale at both locations of The Eye. Take a look: 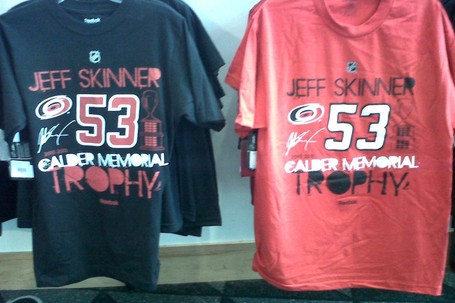 Your final entry under the Skinner wins the Calder heading: Since the kid lights up every photo he's in, here's the Official collection from Getty Images - Skinner in Las Vegas

Visuals: what happens after the Stanley Cup has been won?

Vancouver: After the Riot - Alan Taylor - The Atlantic  [24 photos]

Blackhawks Down - Steve Dangle tweeted this remarkable image of the Chicago Blackhawks from the night they won the Cup last June which has now been 'shopped to illustrate the changes there - after only 12 months.

Of Sunbelt hockey and the move to Winnipeg

A Quick Thank You To The Thrashers - Bird Watchers Anonymous Today's a sad final nail in the coffin for Thrashers fans, but the team leaves all of us with a surprising amount to be thankful for.

Argh.... Is the NHL Poised to Make a Northern Migration? - FoxBusiness.com Some believe the NHL should consider returning to its northern roots by relocating struggling franchises located in the Sun Belt.

In Winnipeg, calm exterior belies great excitement of new franchise - NHL.com When the move of the Atlanta franchise to Winnipeg was officially approved the team's braintrust and fans mostly took the news in stride.

Speaking of making it official, have you been over to the Jets offical web site yet? And here's the SBN Jets blog - a little further along in it's new look: Arctic Ice Hockey

More Realignment talk : Good timing for four NHL divisions - Nick Cotsonikas,  Yahoo! Sports "I think it's a good time to look at it," Carolina Hurricanes GM Jim Rutherford said. "It really doesn't affect a lot of teams like ours, but Dallas has been in a little bit of an odd situation for a long time. Now, part of that is geography. You can't change it. But I'm sure they'd like to get a little bit of a change."

The newest members of the organization

A week before the draft: The Hockey News: VIDEO: One-on-one with Swedish center, NHL prospect Victor Rask The first round of the 2011 NHL draft is expected to be much more full of Swedish players than it was last year and one of the best is Victor Rask. THN's Ryan Kennedy caught up with Rask as he prepares for the big day in Minnesota.

The OHL Draft for European (import) players is tomorrow. It will be interesting to see if Rask is selected (by Kitchener or Plymouth?) as the Swedish forward and the Hurricanes determine what best next step is for him in his development.

Hometown story: York Region Article: Aurora's Murphy picked 12th in NHL draft "It’s weird how it worked out," said Ryan Murphy, who will attend a developmental camp in Raleigh starting July 7 [sic- we've been told July 9]. "I looked at Carolina’s back end. It’s strong, but I think they need an offensive guy like me. "(Head coach) Paul Maurice said if I’m good enough, I’ll play there next year."

If you hadn't caught this, Team Canada: 2011 Summer Development Camp Roster, TSN.ca indicating Ryan Murphy will attend as one of sixteen U-20 defencemen on the list

(Help! I've been looking for the Swedish and Swiss rosters for the WJC 2012 teams and am confident both Rask and Hofmann will be there - but if there's anything official you can find, please make a note of it in the comments).

An NHL prospect's path: From draft day to training camp - Justin Bourne USATODAY.com Most of the players who were picked at the NHL draft will follow a path to next season that looks something like this...

A look at two more Carolina defenseman who hope to play for the country this winter: 2012 WJC: U.S. National Junior Evaluation Camp Roster — Defensemen | The United States of Hockey on Justin Faulk and Austin Levi.

Something different Rink Reno - Lowe's Canada chose the Canes own Zac Dalpe and Zach Boychuk for some promotional videos..