The last twelve months have been pretty darn good if your name is Tuomo Ruutu.

After losing a significant portion of the 2009-10 season to a shoulder injury and subsequent surgery, Ruutu hit the 2010-11 season with a purpose. He hosted his teammates and hundreds of traveling Canes fans in his home country for the season openers against the Minnesota Wild in Helsinki, Finland. He completed all 82 games and posted career highs in assists, points, and hits.

When the Hurricanes' season ended abruptly in April, Ruutu returned to represent his country as alternate captain for Team Finland in the IIHF World Championships and was rewarded with a gold medal, his country's first in sixteen years. He's a recently married man, and apparently when his hockey career is over, he has a burgeoning career ahead as a saxophone player. Or a gladiator (more on that later).

So how did the hard-charging Finn fare for the 2010-11 season, and what can he do for an encore next season? 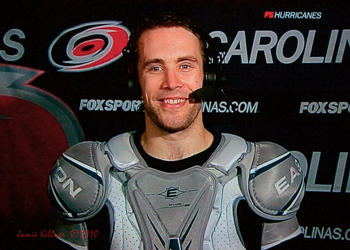 "Johnny what do you mean I "LOOK" like a gladiator?"

Ruutu has been known as a steady and consistent performer throughout his Canes career, and that trend continued in 2010-11 with some positive uptick. Since joining the squad in February 2008 he has never averaged less than .65 points per game (that's an 82-game pace of 53 points). Last season's 57 points was a career high, as was his 38 assists. He was ranked third on the team in points, just behind his frequent linemate Jeff Skinner, with whom he developed a solid chemistry. He also ranked third in power play goals, and fifth in power play points.

In addition to consistency, Ruutu was also relied upon for his versatility. Early in the season he was approached by the coaching staff to move from wing to center, and it was an opportunity he approached with great enthusiasm as our own Bob Wage reported when they spoke back in October.

Ruutu certainly likes the new responsibility and his face lit up when I asked him about it.

"It's a different mind set, to be honest, and more responsibility in my own zone, but I am learning the position and it will get better."

I asked him if it affected the physical aspect of his game. "It changes some things obviously, with my responsibilities down low, I'm no longer the first one on the forecheck. But at the same time, you can finish your checks in your own end."

During exit interviews he mentioned how he felt playing center gave him an advantage because it helped him skate into the neutral zone with more speed, although he also acknowledged he has work to do in the faceoff circle (more on that later). With lines remaining somewhat to be determined going into the new season, Ruutu's continued development in the center role will surely remain a topic of much discussion and debate.

No assessment of Tuomo Ruutu would be complete without a nod to his ability to separate player from puck. His 309 hits (one glass-shattering) blew away his previous NHL career high of 228 and ranked second best in the NHL. Despite the increase in his already strong physical style of play, he was eighth on the team in penalty minutes. He served substantially less time in the box per game played than in previous seasons (almost 1/3 less penalty minutes per game played), a sign perhaps of maturity in his physical role, along with improved decision-making.

While Ruutu's best game statistically was against the Devils on New Years Day, where he tallied a goal and three assists, probably his most memorable performance came against the Florida Panthers on December 15, 2010. Down 3-0 early in the first period, the Canes rallied and Tuomo scored two third period goals within a minute and a half to tie the game and then win it, earning a new nickname in his "gladiator" post-game interview (seen here courtesy of RacoonFink).

41.2%. If your role is in the faceoff circle, that's a dismal statistic. Ruutu was third on the Hurricanes squad in terms of faceoffs taken, but ranked seventh in faceoff wins. Out of the top 100 NHL players in number of faceoff draws, Ruutu ranked 98th in win percentage. On a squad that is not known for overall faceoff prowess, this is an area that he must improve if he remains at the center position.

While Ruutu's assists and total points were high, his goal production was down from years past (19 compared to a career high 26 in 2008-09). His scoring touch remained solid with a 12.8% shooting percentage, but he took about 20% less shots per game than in previous seasons. Whether this is a trend or cause for concern remains to be seen, but given the increase in his assist totals, it could be a sign of better on-ice vision and decision-making.

Ruutu just completed his second year of a three-year contract, making $4m in salary with a $3.8m cap hit. He is due to earn $4.4m in the last year of his contract and will be an Unrestricted Free Agent at the end of the 2011-12 season.