Skaters all across the Triangle are welcoming the good news that Raleigh Center Ice will open its doors this Saturday, August 13.

In late May, the sports complex known as the RecZone closed its doors when the owner filed for bankruptcy, causing BB&T to call the loan on the property and then proceed with foreclosure. The move stranded the Carolina Hurricanes without a practice facility, forcing their summer conditioning camp to be relocated to Wake Forest, while RYHA and other area leagues scrambled to find ice time at alternative locations.

On June 13, BB&T and the company it assigned to manage the RecZone, Charlotte-based Liberty Solutions, announced it had contracted with Patrick Cavanagh and his company CCS to immediately begin renovations so the rink could reopen in August. True to plan, the facility is now scheduled to open this weekend under its new name, Raleigh Center Ice.

Cavanagh was kind enough to take a break from the 24 x 7 construction ("We'd be working 25 if we could") to give me a quick tour this week.

With the exception of the building shell and major load-bearing walls, RCI's interior has been almost completely gutted. The rink itself is completely rebuilt with a new ice plant, a new jet ice surface, new dasher boards, and new glass. All are designed to mirror an NHL-level rink to the extent it can be accommodated by the facility structure, both in dimension as well as quality of construction. Because the RBC Center is a multi-use facility, the Hurricanes have a frequent need to move to their alternative practice location, and Cavanaugh stated his goal was to make the rink feel like a "home away from home" so the players could easily make the switch between facilties with little need for adaptation. As is befitting, the Hurricanes alternate logo now graces center ice.

Away from the rink, the lobby is also undergoing a complete renovation to offer new amenities. The entire lobby area in front of the rink has been opened up with the tear-down of several walls, the check-in kiosk has been relocated, and plans are being finalized to add a pro shop and a sports grill in the near future.  Says Cavanagh:

“I am thrilled with the outcome of Raleigh Center Ice, our team has worked around the clock to bring this project to fruition in a short time frame. I am hopeful that RCI’s new pride is embraced by all and has positive impact on future years of athletes and enthusiasts. Although our first phase of renovation is nearing its end, I still have plans to announce a Pro shop and Sports bar/grill at RCI, without question, these two amenities will put the final touches on our customer service plan while enhancing the experience for everyone spending time at RCI.”

Cavanagh also reports that to date demand for ice time has been high, and there are already few vacancies remaining for the upcoming months.

As part of the grand opening on Saturday, RCI will offer free admission to all of the day's activities, which begin at 8:30 am and include adult skates, public skates, and youth puck shoot sessions. A full schedule of events is posted on their website.  Cavanagh notes that skate rentals may be limited.

Last but not least, for those who have been waiting patiently (or not) since early April, the Hurricanes will be back on the ice to begin their informal skates (or as we locals call it, "Camp Brind'Amour") on August 22. Players will practice between 10 am and noon, and the practices will be open to the public. These informal sessions will continue until mid-September and the start of training camp (no official date announced yet). Additionally, the Canes will hold scheduled practices and pre-game skates at the facility a number of times during the season when there is an RBC Center schedule conflict.

Here are a few photos of the renovations. 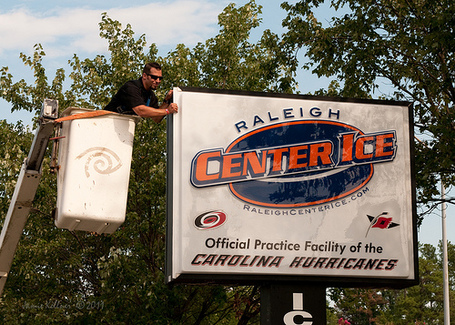 New signage out front.  That's Jorge Alves in the cherry-picker 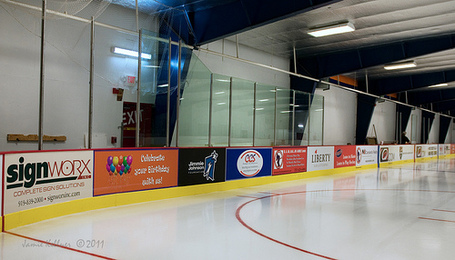 New ads on the dasher boards. 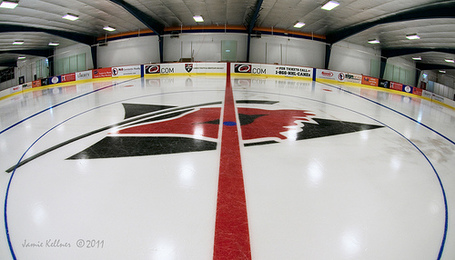 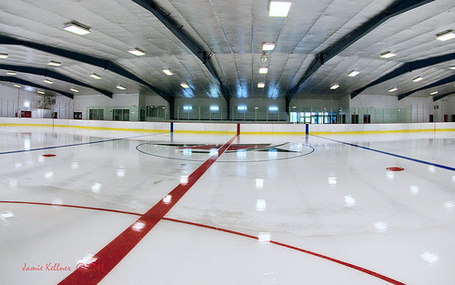 View from the benches (which have also been replaced).