Share All sharing options for: Clicks and Clippings: Raleigh bound!

In case you weren't counting down the days like I am, the Carolina Hurricanes' unofficial/informal skates, affectionately known as Camp Brind`Amour, will kick off this coming Monday at the new and improved Raleigh Center Ice. We hear from the N&O's Chip Alexander that they will take the ice at 10:30am. So, yeah, less than 48 hours.

Even as we wait patiently in the Triangle for our team to lace them up back here in North Carolina, the players are also turning their eyes to the trip to Raleigh after a summer up north. Those on twitter have been sharing their thoughts this week.

From Jamie McBain, Monday: @jbain4: Last week in minny. #wheredidsummergo. He just added this at 12:50pm today: @jbain4: At the airport, Raleigh bound!

Tim Brent was looking for help to enjoy some hunting during the season Tuesday: @Brenter37: Alright caniacs- who has some good hunting land they can hook me up with for this year!? #pleaseandthankyou :)

Patrick Dwyer from Wisconsin on Wednesday: @pattydwyer39 Good summer in Minocqua but back to the grind. Raleigh bound! #raleighwood

Zac Dalpe told us he's headed down today: @ZacDalpe22: Raleigh bound on Saturday! He followed up yesterday with @ZacDalpe22: Some last minute packing before the big trip to Raleigh tomorrow with the big brother. The worst packer on the history of the planet! #sobad

And the most active Canes player in the twitterverse whose #hashtags are always the best part, Anthony Stewart has been telling us about tough workouts at a training camp in Brainerd, Minnesota all week. But with camp complete, he said last night @Astew22: Almost time to head for Raleigh #theNhillshaveeyes

After the jump, more updates about the Hurricanes from their hometown papers around the world, plus NHL preseason discussion and ratings,  the Checkers schedule for 2011-12 is released, European prospects, alumni doings, and a few good links from around the puckwebz.

Airdrie's twin stars have a healthy competition | Airdrie City View The Airdie Alberta hometown paper spotlights Zach Boychuk and his sister Corissa: There is one room at the Boychuk family house that seems a lot more crowded than the rest.

Tuomo Ruutu in ice: It feels pretty awful | YLE Sports | yle.fi Hurricanes' forward Tuomo Ruutu was practicing on Monday with a few other NHL players, preparing for the upcoming season. Ruutu said that the first sessions on the ice after the long summer recess are always difficult. [google translated link]

Skinner figures to be NHL star for a long time - thestar.com As a youngster, NHL rookie of the year Jeff Skinner won a bronze medal at the Canadian junior figure skating championships.

"It is special to come into the NHL and score 30-plus goals," Maurice said. "It usually takes three, four or even five years to develop. Everyone down here has fallen in love with him. He is grounded and he looks like he's having fun."

Feschuk: Stars align for local hockey guru - thestar.com with a report on another element of Skinner's summer training regimen with NHL veterans Jason Spezza, Mike Cammalleri and Wojtek Wolski: Why was the foursome of pros, slated to make a combined salary of about $20 million next season, spending a summer’s day at the decaying Vaughan Iceplex, where the goal nets, like the walls, have holes? They were there to see Jari Byrski, the noted skill development coach.

Hoping hard work pays off - Brantford News Paris' Zac Dalpe may have played 15 games in the National Hockey League last season, but that doesn't mean he has achieved his goal.

The Canes' coaches getting some love too:

With one extremely successful inaugural season under the proverbial belt, Delhi's Geordie Kinnear and the AHL Checkers have become much more than the symbol for a final lap in Charlotte. "I can't say enough about Zac Dalpe. He came in as a very highly skilled player, but what I liked is that he's very coachable, works hard every single day after practice -- almost to the point where you have to tell him, 'Look Zac, you're playing a lot of minutes, a lot of games, you need to take a break,'" Kinnear explained.

Last, some family time for all the Staals at the lake this summer captured in this facebook photo album from equipment sponsor Bauer Hockey, featuring Eric, Marc, Jordan and the first of the next generation Parker, who is not quite 2. Staals: Offseason on the lake  photo album. Mike Sundheim shared some other exciting family news about the Staals by twitter.

The NHL’s best bargain contracts: Southeast Division | ProHockeyTalk With all the attention spent on players who get paid too much, there isn’t as much focus on the league’s best bargains. PHT will take a team-by-team look at non-rookie contracts that are great values, finishing with the Southeast Division. Which two players do you expect would be listed for the Hurricanes?

According to ESPN, the NHL franchises with dimmest futures - Puck Daddy Your Carolina Hurricanes were 25th on the list from ESPN, though 13th per Hockeys Future before the draft...thoughts?

Hockey Primetime - 2011 Training Camp Preview: Carolina Hurricanes A young team seems to be on the rise. After the Hurricanes made a pair of significant off-season signings, another playoff near-miss won't cut it in Carolina. [s/t to @lgc_com]

The new 2011-12 schedule was released by the AHL Thursday afternoon. Here's where you start when planning your trips to the Queen City to see returning players like Justin Faulk, Chris Terry and Mike Murphy and newcomers Mattias Lindstrom and Justin Krueger: Just released: Checkers 2011-12 season

A change of sorts as the Hurricane's senior web writer, Paul Branecky, a native of Charlotte, will be moving over to contribute his expertise to the website and marketing for the Charlotte Checkers beginning this season. Here's his farewell post at his Tracking the Storm blog, thanking Canes fans in Raleigh for his five years working on Edwards Mill Road. I'm looking forward to what that synergy will produce and best of luck to Paul and his family getting closer to home!

Last week I linked a report from Sweden quoting Victor Rask's agent to say the Canes' 2011 second-round draftpick would be headed to North America for the 2011-12 season. This week we heard from Jim Rutherford that he has the same expectation. Canes Now - Canes hopeful Rask will play in N. America

Which prompts this story from the world of Junior hockey: WHL: Victor Rask could end up with Calgary Hitmen — ‘Canes GM - Buzzing The Net - Yahoo! Sports

That being said, one can see the storyline with Swedish draft choices taken after the first round scurrying to play in North America. NHL teams probably don't have much to worry about if first-rounders stay home for a year, but anyone else has a little more to prove before they're fully a prospect and not so suspect.

Another story on this development from the Swedish perspective: 18-year-old [may be] offered contracts by Carolina - HockeyExpressen.se [also google translated link]

Now, suddenly two other attractive options emerged: he writes a contract with Carolina is the idea that he will play in the Farm Team Charlotte Checkers in 2011-12 AHL season. Victor can also choose to play junior hockey in Canada, where he is listed (as number three in import draft) of Calagary Hitmen in Western Hockey League

Danish goaltender Frederik Andersen made his Swedish Elite League debut in a preseason series between various Elite leagues in Europe. He won his first appearance vs a respected team from Germany earlier this week. He is in Finland today vs the Finnish team TPS. [Update: Andersen made 23 of 25 saves in the shootout loss, and was awarded 2nd star of the game - s/t @Tomppaaax]

From the recap of the Salzberg game, including a photo of Andersen in action: Frölunda Indians: Frölunda-Salzburg 3-2 A heroically struggling defense and a very calm and safe Fredrik Andersen did, however, hold off Salzburg so that their lead was held to 2-1.....Coach said of him - I think he makes a full pass [gets full marks on his?] debut, he exudes calm and provides stability to the defense.  [google translated link]

He also gets full marks from @HMof2 for his use of twitter. Check out these photos of his new mask - with the Frölunda Indians theme: Twitter / @f_andersen30: Pics of my new mask, thanks @artofdave

Speaking of Twitter...The Hurricanes now have an Official "Social Media" page to easily confirm which players and prospects have joined the twitterverse. Also included are official facebook pages and the best of the Canes related blogs.

Inside College Hockey | INCH A-Z: Danny Biega Harvard defenseman and Canes 2010 draftpick, Danny Biega’s physical capacity is something that Ted Donato raves about, and the coach isn’t afraid to lean heavily on the defenseman. His strength and fitness allow him to play a ton of minutes, and Harvard uses Biega in all situations.

College Hockey | Lots to Look Forward To Brian Dumoulin and Justin Schultz are just two of the elite talents who return to college hockey in 2011-12.

Barclay Goodrow appeared on our radar as an undrafted invitee to the Hurricanes Conditioning Camp last month. He is also a childhood friend and pre-juniors teammate of the Canes' #1 pick this year, Ryan Murphy. The two of them will be sharing their experiences this year with a hometown website in Aurora, Ontario - that's worth keeping an eye on, eh? The first installment is here: Barclay Goodrow update from AuroraClicks.com

Barclay must have been impressive at the conditioning camp because he has been invited to the rookie camp at Traverse City Michigan starting on September 9th where the Hurricanes will ply four games in 5 days against other NHL Rookie teams. If he is successful there he would be invited to the main camp.

Mark Recchi's first and only tattoo circulated on twitter on his day with the Stanley Cup last weekend: @DRosennhl: Mark Recchi's new tattoo (via Lockerz.com) 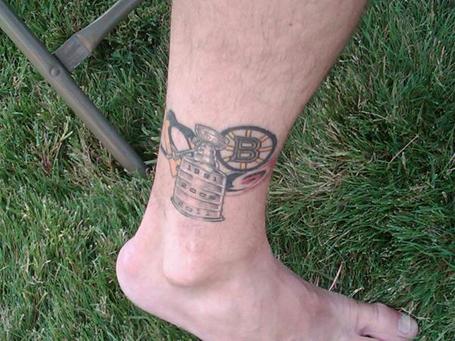 2002 Canes rise quickly through hockey ranks - Luke DeCock - NewsObserver.com Watching the Carolina Hurricanes overachieve in 2002, making it within three wins of the Stanley Cup, it didn't take a hockey expert to figure out that was a special group of guys.

Leighton not sure where he fits in Flyers' crowded crease - USATODAY.com A year ago, Michael Leighton was exactly where he wanted to be in life.

The creative proposals coming out of the NHL's Research and Development camp this week, under the guidance of the NHL's front office idea man Brendan Shanahan, are all intriguing and some even seem really off the wall. Still, there were some that didn't make the cut:  Down Goes Brown: Rejected ideas from the NHL's research and development camp

From a young blogger who covers the Washington Capitals,  I thought this was worth a click: ‘Hockey From A Woman’s Perspective’ " Kings Of Leonsis

This is such an interesting story showcasing one example of hockey's growth in the States and an interesting connection between  sports icons in Dallas and Denver. Hockey Pop: Popeye Jones' Son Is A Rising Star, But Not In Basketball | ThePostGame plus this follow-up story from USA Hockey's U-20 evaluation camp in Lake Placid last week:  Only 16, Jones takes starring role at U.S. junior camp - NHL.com Seth Jones has a famous father -- former NBA player Popeye Jones -- but the 16-year-old looks like a future superstar in hockey.

Is Jeremy Roenick America’s answer to Don Cherry? - The Globe and Mail Former NHLer has signed a five-year deal with NBC

Finally, and on a very somber note, this well-researched story was written prior to the terribly sad news that Rick Rypien had died this week. In it, the author highlights a lot of important questions that are too often overlooked in the "tough guy" culture of hockey: The human toll of fighting in the NHL - Silver Seven A look at the massive physical and mental costs associated with fighting in the NHL, and whether or not it's worthwhile.