Fresh start in Raleigh: Familiar faces (and some new) at RCI Monday

Share All sharing options for: Fresh start in Raleigh: Familiar faces (and some new) at RCI Monday

It may not be anything "official" as far as the 2011-12 NHL hockey season goes, but for those of us who were at the Raleigh Center Ice facility Monday morning, it sure felt good to be back among friends. For a few, it was a chance to learn what hockey in Raleigh is about.

As expected the players took to the ice a little before 10:30am. Jon Matsumoto was first out, followed by Chad LaRose, Patrick Dwyer, Jiri Tlusty and Zac Dalpe among the Hurricanes forwards. Jamie McBain and rookie Justin Faulk joined in, with Cam Ward ready to tend the nets.

A few minutes later, a second goalie skated out in orange gear that didn't match the black Hurricanes jersey. What an unexpected pleasure for us to see the Canes new backup, Brian Boucher, the 34-year-old goaltender who spent the last two seasons as the most persistent presence in that goalie-go-round for the Philadelphia Flyers. He came to Raleigh early to get to know his new team and was ready to contribute.

Phoblographer Jamie Kellner and I (and maybe another 50 Canes fans) made it to RCI Monday to see this new crew prepping for a competitive Training Camp, which is still 4 weeks away. While I'm pretty sure you're just here for the pictures, I've got just some quick notes to pass along.

There were no coaches or other front office types in the building, but head trainer Pete Friesen was on hand with a helper and a couple key guys from the equipment crew were consulting too. Friesen contributed on the ice toward the end of the session, which lasted over an hour. For only nine skaters and 2 goalies, it was a good workout. 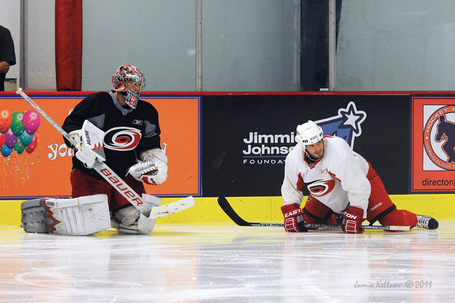 Cam Ward and Chad LaRose (who represent two of only three players remaining from
the 06 Cup winning team) were providing the leadership Monday. (via Jamie Kellner)

Chad LaRose was the guy directing the drills, and as the most veteran on the team among the 7 NHL skaters present, the N&O’s Chip Alexander suggested this year’s gathering be tagged as Camp Rosey* to recognize his leadership. He was also active talking with Boucher on ice and seemed to be welcoming him to the organization. 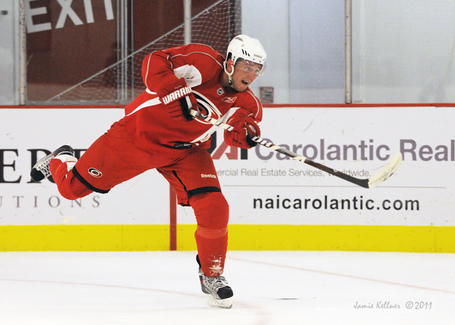 I was very happy to see 23-year-old Jiri Tlusty out there Monday. He was mobile in his skating, and looked strong and fast. After two difficult injuries in the last 16 months, this is a big year coming up for the 2006 first rounder. The Canes will be that much better if he’s able to make the most of it. 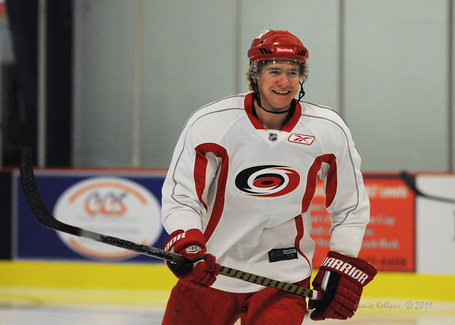 Zac Dalpe was wicked fast on his skates and so quick with his shot, it was literally breath-taking. Among the fans watching from the glass, there was a lot of buzz about how remarkable he looked. I won’t be surprised if he measures a bit bigger (height and weight) than last year. He was also very loose and seemed to be having a great time which made him that much more fun to watch. 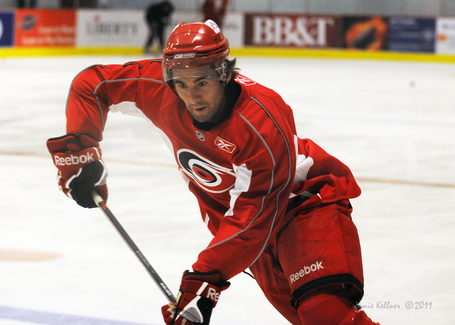 Jon Matsumoto was skating hard and seemed to have a lot of jump. He’s one trying to make the leap to the NHL, and, though his name hasn’t been mentioned with the top candidates, maybe he could surprise. He seemed to know Boucher, likely from an overlap of careers in the Flyers’ system. 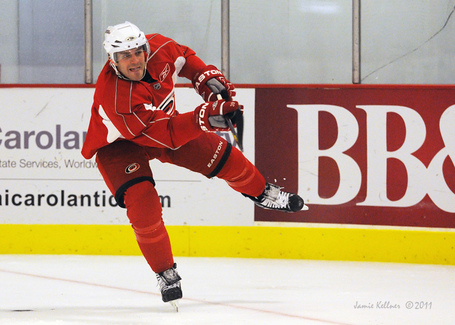 Patrick Dwyer, like Matsumoto, had a lot of energy. He also signed a new contract over the off-season, his first one-way. I'm sure it's a good feeling, with a young family, to know he's settled in the NHL for the next couple seasons.

Though Anthony Stewart wasn’t out on the ice today, he did get to the rink in time to meet those on hand and apparently signed some autographs. I would expect he’ll be skating Tuesday. Shouldn’t be hard to pick him out: he’ll be the guy who is 6-3, 230 pounds.

Just two defensemen Monday: Jamie McBain was his usual relaxed self, and it was great to see that first-rate passing is still steady as ever. I saw nothing to indicate he isn’t 100% after the shoulder surgery in April. 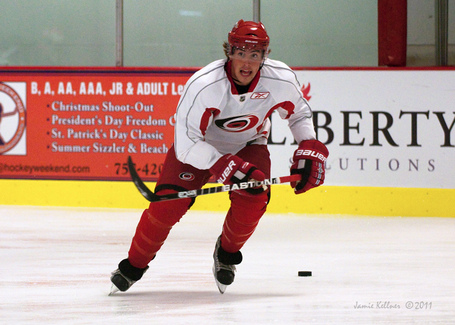 The other defenseman in the group, Justin Faulk, who won the NCAA Championship in April before joining the Charlotte Checkers in the first round of the playoffs (where he played with Dalpe and Matsumoto) is a newcomer to these August sessions. Last time he skated at the RecZone, it was barely a week past being selected 37th overall in the 2010 Entry Draft. I had to remind myself he is still only 19; he was physically solid and very focused.

It's been a busy summer for the Minnesota native this year as well. He was at Lake Placid for USA Hockey’s U20 8-day Evaluation Camp just a couple weeks ago and will be heading to Traverse City, Michigan for the prospect tournament September 10-14, before the main Camp begins on the 17th. 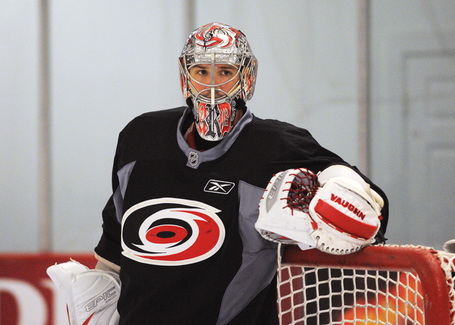 Cam Ward - Looks like a new mask? Apparently not. (via Jamie Kelner)

Cam Ward looked, well, marvelous: fit, rested, and very happy to be back out on the ice. Ward also had some positive exchanges with Boucher which was visually great for Canes fans who were watching from outside, no matter what words were said. I have no desire to see Ward set a new standard for shots faced in 2011-12. I'm also counting on Boucher as to the key to make that happen.

As I mentioned Pete Friesen watched and took notes while they worked through some tough mobility drills in one corner, with just the forwards. Like I said above, they skated a full hour and then some.

There were 2 teenagers participating today, including Cary’s Charlie Pelnik. He’s been on the radar nationally for a a couple years and has already committed to attend the top-rated University of North Dakota. The N&O ran a feature on Pelnik last January. A defenseman, he should be all of 16 by now and will be a high school junior this fall.

I’ve found no one who can identify the other youngster who was wearing gear from Cushing Academy, a private prep school in Massachusetts. Help us out it you know, please.

For all 4 dozen photos from Monday, please take a look at Jamie's full Flickr set

*Please don’t be confused when you see various names for these informal sessions tossed around. All you need to know is 1) they skate only at Raleigh Center Ice (formerly the RecZone), not at the RBCCenter. Additionally, 2) it’s never a job requirement that any of the players attend; totally voluntary and for their own benefit.