Share All sharing options for: Clicks and Clippings: Hurricane forecasts

With thirteen Carolina Hurricanes players already in town and hockey season that much closer, eyes are turning toward predictions for this upcoming Hurricane season. Today, a look at what the guys already skating daily at the Raleigh Ice Center expect. My forecast, contingent on the track of that "other" hurricane, is that we should be on the lookout for several more players making an impact on the ice at the Hodges Street rink by Monday or Tuesday.

Chip Alexander caught up with Anthony Stewart and Bryan Allen at RCI Thursday. His story from this morning's N&O forecasts that Stewart may have something to prove this season and should be a force not taken lightly. Canes' Stewart is just a tweet away - NewsObserver.com:"[Stewart] is your stereotype power forward," said Canes defenseman Bryan Allen, who played with Stewart in Florida. "He's big and strong up and down the wing, has a great shot. For a big body he's got some speed."

Stewart had this to say after practice with trainer Pete Friesen Wednesday:

Day 3 @ the office complete, the drills and workouts aren't a joke! They're buliding machines around these parts

Office work done, operation turn into a machine will commence on Monday

More forecasts: Hurricanes look to complete some unfinished business | ProHockeyTalk After fading down the stretch and coming up one game short of the playoffs, the Carolina Hurricanes know they have some unfinished business next season. This based, in part, on an N&O story Tuesday: Canes hit the ice - NewsObserver.com Carolina Hurricanes winger Chad LaRose says he keeps the newspaper article in the top drawer of his dresser, easily accessible, easily seen.

Another one: Some key questions facing Eastern Conference teams - NHL.com Writer John Kreiser asks: Should a non-playoff team have made more changes?

After the jump, rookies, sophomores and one famous Bug in the news. Plus some hockey stories to make you smile, and perchance, pause to think about other priorities.

This press release from NHLPA.com: 2011 NHLPA ROOKIE SHOWCASE has a list of the 27 NHL players who are the rookies to be featured on the Young Gun trading card series for the NHL's 2011-12 Season. Jeff Skinner was there last year, you likely recall. The group of top-tier talent will be in Toronto Tuesday and available to media. I was delighted to see the list includes our very own rising star 19-year-old Justin Faulk.

Another promising defenseman in the Canes system is spotlighted in this hometown blog: Ryan Murphy Returns From World Junior Camp - AuroraClicks.com Ryan is in the process of moving back to Kitchener and is preparing for training camp which opens at the end of August. He will then head to Traverse City Michigan for the NHL Rookie tournament which begins on September 9th. The tournament involves rookies from 8 NHL teams with each team plating 4 games in 5 days. After that Ryan hopes to be heading to Carolina’s main camp later in September.

Checker's goalie Mike Murphy had a wonderful surprise for us when he shared a preview of the art on his new mask for the season. Beauty for Bug, Cardiac Cane The 22-year-old netminder, [Murphy] recently tweeted his 2011 season mask and it is a beauty. EYECANDYAIR by Steve Nash provided a breathtaking mask that depicts a very cool tribute to the one and only Bug Bennett.

The Jimmy V Celebrity Golf Classic will be the weekend. Hearing now that Zac Dalpe, Jamie McBain and local NHL veteran/Canes alumni, Bates Battaglia are among those participating. Follow along on twitter @jimmvgolf. (s/t @lgc_com)

Skinner as a Sophomore is a big storyline this preseason

This is a must read with quotes from Jim Rutherford, Gary Roberts and the wunderkind himself on what everyone is looking for and why in Year 2: Hurricanes forward Jeff Skinner ready for second NHL season, more attention - Chris Johnston, Canadian Press

Motivation has rarely been an issue for the soft-spoken teenager, whom Roberts says was the leanest player to work under him last summer. Skinner picked right up where he left off after scoring 31 goals and putting up 63 points in his rookie season.

"This kid is a wonderful, wonderful young man who does his work every day," said Roberts. "He just quietly goes about his business. He hides in the corner of the gym, kind of sneaks in and does his sets and sneaks back out."

Another story includes a poll to vote who will be the next  league-leading youngster like Stamkos. Currently our #53 is leading the pack. Stamkos leads NHL's top 21-and-under talent - NHL Insider In today's NHL, the premium put on finding young talent has resulted in players getting more opportunity and responsibility at an increasingly early age.

I'm thinking this young hockey player might have something to prove as a sophomore himself this year. Even when Logan Couture signs a huge contract, that he lost to Skinner for the Calder is still a part of his story. Couture signs $5.75-million, two-year extension with Sharks The 22-year-old Couture was a finalist this past season for the Calder Trophy that goes to the NHL's top rookie, losing out to Carolina's Jeff Skinner.

Following up on Wednesday's story on the celebrity BioSteel Camp in Toronto, here's the 2011 BioSteel Camp Day 4 Video which includes Justin Peters getting some primetime footage. I've seen bits of Chris Terry in these, but I've yet to spot Jay Harrison - anyone who can confirm he's there this week? You might also enjoy Day 3's video which has some Skinner on the ice - he's the one showcasing that familiar 10-and-2. (What's that? Oh - Training Camp starts 3 weeks from tomorrow.)

More from those Unofficial Workouts* at RCI this week

A bunch more photos from RCI of Camp Brind`Amour Week 1 are up at Jamie Kellner's Flickr site. Canes Country member Raccoon Fink used one of Jamie's shots of Cam Ward taken between drills Tuesday as a source with his latest and greatest photoshop contribution to the I'm an Ant Eater meme. 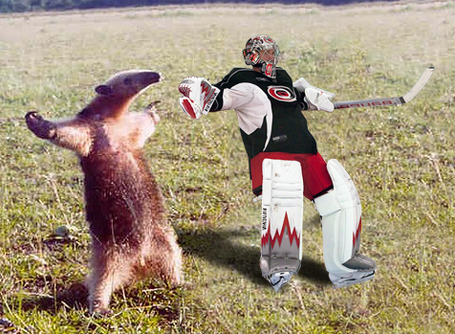 Puck You! Cam Ward is an ANTEATER! via gallery.raccoonfink.com

A discussion of "to Tweet or not" from Canes Now - For Canes, tweeting a personal choice

In case you missed it, here's the video from CanesVIsion that I linked in the comments Tuesday, narrated by one very a well-spoken rookie, Zac Dalpe:  2011 First Unofficial Skate - CanesVision

*Footnote: Those watching at RCI today tell us (and I direct you to scan through @Cerebellum417 for lots of good details), that with Chad LaRose absent (traveling) today, relative newcomer to Carolina and NHL veteran defenseman Bryan Allen is running the drills. Which of course further complicates the naming rights for the "Unofficial Skates Formerly Known as Camp Brind`Amour".

Just one entry this week: 10 newcomers being counted on to make impact - NHL.com  Former Canes Ian White and Erik Cole may be in the hot seat.

A few links worth thinking about.

Sidney Crosby's agent and the Penguins try to quell some of the concern about the superstar's future in the wake of a severe concussion that's kept him away from the NHL since January. Crosby Visits Leading Specialists - Pittsburgh Penguins

"We always knew this was going to be a progressive recovery – based on how he felt," said Pat Brisson, Crosby’s agent. "With a concussion, there is not a finite recovery period like with a shoulder injury or a knee injury. That’s why we’ve never even set a specific goal for a return date like the start of training camp or Oct. 1 or anything else. He will play when he is symptom free."

The Hockey News' Adam Proteau had this reaction: Concussions a concern long before Sidney Crosby If the Penguins superstar center is unable to continue his playing career – and no matter what whispers you hear, there is no conclusive evidence that is the case – the NHL and the sport will be much poorer for it.

A very very long read - but given how much "Nature Boy" and his trademark "Woooo!" are part of the Carolina Hockey experience, please take a minute to scan through The personal struggles of wrestling star Ric Flair - Shane Ryan, Grantland  Ric Flair's long, steady decline.

Ending with a smile in this hockeymom special: Lord Stanley's Summer: Interview with Thomas's Dad - NHL VideoCenter Bruins Goaltender, Tim Thomas' father tells us the circumstances of when he and his wife pawned her wedding ring so a young Tim could play hockey. Bonus: includes a mention of Canes' VP/Assistant GM Jason Karmanos who was teammates with Tim and Brian Rolston at that Mite tournament nearly 30 years ago.

For all you readers who may be in the path of Irene this weekend, please know all of us here at Canes Country will be hoping for the best. You've certainly been through this drill before, and we all know it can be very frightening and more than a minor inconvenience. Take care and play it safe. Please let us know how you're doing. This is one weekend where the word Hurricane has a meaning we don't need to be taking lightly. We're in this together, it affects all of us, and consider us here to help in any way we can.