Running and Remembering: 2011 Friesen 5k Fun Run with the Canes

Share All sharing options for: Running and Remembering: 2011 Friesen 5k Fun Run with the Canes

It was a beautiful morning for a race, with barely a cloud in the bright blue sky.

When Pete Friesen decided months ago to schedule his sixth annual 5k run on the tenth anniversary of this tragic event, he surely intended to recognize a defining moment in our nation's history before looking ahead to a new hockey season with renewed purpose and spirit. But at the time it would have been difficult to imagine just how much reflection and renewal would be needed, before the recent events which have shaken not only the Carolina Hurricanes organization but the hockey community worldwide.

The Friesen 5k Fun Run with the Canes has always served as an unofficial kickoff to the hockey season, in addition to providing support and funding to the Leukemia and Lymphoma Society of Eastern NC.  This year was no exception, but was made more significant by bringing a community together to honor the fallen with tributes throughout the day.

Pre-race ceremonies began with bagpipes and presentation of the flags by a military color guard.  Emcee John Forslund acknowledged NHL teammates, co-workers, colleagues, and friends who had recently passed away with a request for a moment of silence: Derek Boogard, Rick Rypien, Wade Belak, Donnie MacMillian, Brad McCrimmon, Josef Vasicek.  Katherine Fritsch sang the national anthem.  Members of local EMS and rescue services were brought to the stage to stand for recognition during player introductions.

I counted 32 players participating in the day's events, which eclipses last year's very impressive 23 attendees. All active roster players who skated pre-camp were there with the exception of those at Traverse City (Justin Faulk, Justin Krueger, Jared Staal), plus Jussi Jokinen and Tuomo Ruutu who had not previously skated in the sessions at RCI. Several players walked part of the race course with their children or took part in the kids' fun dashes. Chad LaRose was the solo runner from the roster.

Runner participation was not at record-setting levels, but registrations were up substantially from last year.  Over 1,000 runners and walkers signed up.  The race winners came from the "local" ranks of Raleigh.  Jeremy Gower, a high school senior from Garner, won the men's race, and Kelcey Carlson of WRAL-TV won the women's race.  The Piper's Tavern won the team award, raising over $1,000 in contributions and registrations.

The Leukemia and Lymphoma Society discussed their recent activities, and a young leukemia patient spoke eloquently regarding his treatments and thanked the audience for their contributions which have helped ensure his very good odds for survival and eventual cure.

A few photos follow, more can be found in my 2011 Friesen 5k photo album. 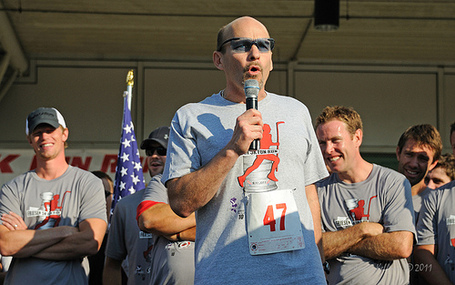 Pete Friesen gets everyone fired up for the start of the race - author's photo. 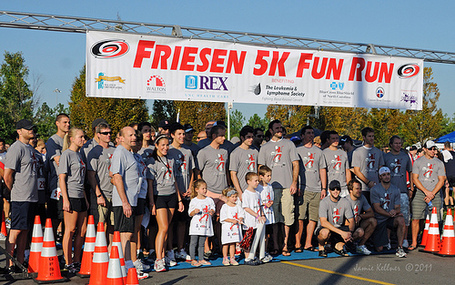 Difficult to get all the players lined up in one shot - author's photo. 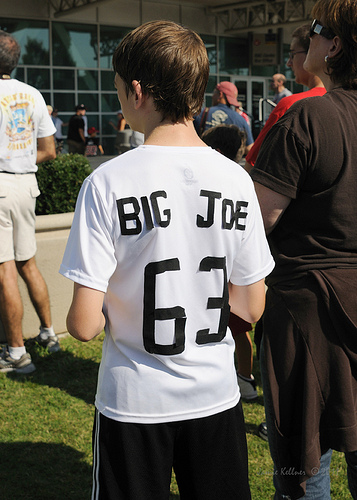 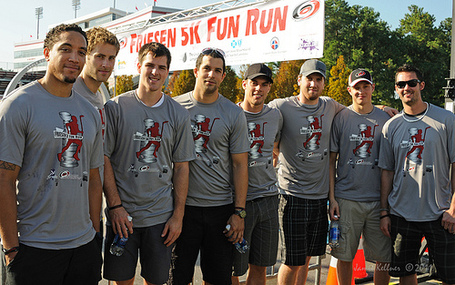