Clicks and Clippings: First look on the Ice

Share All sharing options for: Clicks and Clippings: First look on the Ice

The Carolina Hurricanes held their first official practice sessions on the ice at the RBC Center today. With today's events closed to the public, the media stories are the best sources we have for what it looked like today.

Here's what they're saying

Audio Links you want to hear, in particular listen to Paul Maurice's post practice comments - audio [6:42 minutes] Talking about the pairing of Ryan Murphy and Bryan Allen, and why Murphy's relatively small size isn't a big concern; how the battles among the young forwards should ideally play out; and describing the new defensive system coming from the new blueliner coach Dave Lewis.

You should also listen to Ryan Murphy's own  post-practice audio [1min] after his first session with NHL players and a bit on signing the contract yesterday.

A familiar voice in a new role Forwards Face Tough Competition at Camp  - Paul Branecky, Charlotte Checkers' gocheckers.com All of that time has been spent jockeying for position in the organizational depth chart, which leads to an interesting dynamic for those that normally call themselves teammates and friends in Charlotte. His twitter feed was also filled with some good info: @PaulBranecky.

Victor Rask says he's definitely playing in North America next season, but doesn't know where. Carolina, Charlotte, Calgary all possible. Rask: "Not knowing has been weird and I've been living out of a suitcase, but its good to have options"

After the jump, more from today, Canes Country's plans for the Sunday Scrimmage, a couple more great previews of the Hurricanes Camp you'll want to read. Add in notes from Traverse City which have some very positive Hurricanes tie-ins. Plus what about that Frederik Andersen?

Branecky  followed up the clarification from Rask with a story this afternoon which adds input from Jim Rutherford and also considers what the season may hold for fellow Swede, Mattias Lindstrom.  Rask's Decision Only First Step - Paul Branecky, Charlotte Checkers  Carolina Hurricanes prospect Victor Rask ended at least some of the speculation about his future on Saturday by confirming his intention to play in North America next season, but there’s still some way to go.

Chip Alexander had this up after the first session this morning: Canes Now - Canes back on the ice and skating (a lot)  .  I'd also strongly encourage you to scroll through his Twitter feed @ice_chip for many interesting tidbits about Victor Rask, Jared Staal, Joni Pitkanen, and on and on, that didn't make the Canes Now story.  He also tells about lines and pairings. A few of his well-chosen factoids surprised me. Sample:

Twitter / @ice_chip: One conditioning note: Jared Staal said he had lost 15 pounds since the end of last season.

Our own Bob Wage was able to get a lot of quotes, maybe a few pictures (he reports Brian Boucher has finally worn his Canes Mask instead of the Flyers Orange & Black we saw for weeks at the RCI workouts) and has his own take on what he saw - all of which will be up later this evening.

As you know, the Red vs White Scrimmage is set for noon. Cam Ward will be held out and it wasn't clear yet which goalie, Matt Mahalak or former Boston College netminder John Muse, who signed an AHL contract but is not a Canes prospect, will back up.

Bob will be running a live gamethread tomorrow for those attending to be able to share comments; for those who can't attend the game, Bob will track the action from the press box with notes on line combinations and other matchups that tell us more about the weeks ahead.  The Canes Country's Guide to Red vs White Game may also help you if you're at the game and need some prompts to sort through the less familiar names and faces.

5 questions as the Canes start camp - NewsObserver.com More than five months have passed since the Carolina Hurricanes last played a hockey game. Most remember that one didn't go well for Carolina - a 6-2 loss to the Tampa Bay Lightning that kept the Canes out of the Stanley Cup playoffs and ended the season with a thud.

There are exceptions to the waiting game, of course, most incredibly that of the Jeff Skinner, 19, last year's seventh overall pick by the Hurricanes who made a splash in Traverse City, tying the Rangers' Derek Stepan with seven points in four games. What's craziest is what happened next: Skinner made the NHL roster, scored 31 goals on the way to 63 points, ended up being named as an All-Star game injury replacement, and earned the Calder Trophy as Rookie of the Year. It was an unbelievable run by a man, who with a freckled babyface hardly has the appearance of an imposing professional athlete.

Did you see that the cover story of the Traverse City Official Tournament Guide was all about the Canes #53? Here's the recent  interview with Jeff Skinner and a look at the cover of the print edition from the author's Red Wings focused blog: The Left Wing Lock: Hurricane Warning: Jeff Skinner Takes the NHL by Storm

From the post-tourney wrap-up done by Mike Morreale, it's not bad to get 2 out of 9 on the list of top performers according to NHL.com. Betcha know who they are already. Nine players who stood out in Traverse City - Prospects

Glen Wesley on Justin Faulk: "I feel right now he can be a guy to come into camp and surprise a lot of people. He's so far ahead of where we thought he'd be at this point and, let's face it, we've seen younger guys come into this organization and surprise too." 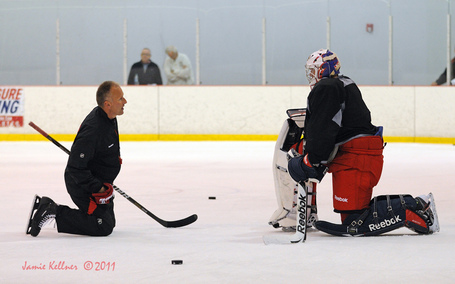 From Conditioning Camp in Wake Forest in July, Tom Barrasso with the 6'-4" Danish Goaltender Andersen. via Jamie Kellner

Off -topic to the Canes prospects in Raleigh, but Goalie Frederik Andersen is off to a remarkable start with the league-leading Frolunda Indians of the Swedish Elite League.  Per the Frolunda stats page for the Danish prospect who was drafted in the 7th round of 2010, in his first 3 games in Swedish Elite League, Andersen is 3-0, with a GAA of 0.67, and Save % of .973, which includes a shutout in his debut.

Adding to his journey as a rookie in the SEL, Frolunda will be playing an exhibition game vs Henrik Lundqvist and the New York Rangers in October; Lundqvist's twin brother is the Indians' captain.

Vasicek patch is a classy move

Finally, this came up on the facebook feed from USA Today's Kevin Allen, following the Canes' announcement Friday that they will be honoring the memory of Josef Vasicek by wearing a #63 patch on their uniforms this season. The "always classy"  is the part that I appreciated.

The always-classy Carolina Hurricanes will be wearing patches on their jerseys this season to honor former 'Cane Josef Vasicek who was killed last week in the plane crash in Russia that killed 28 players, two coaches and seven staff members of the Lokmotiv hockey team. Vasicek played on Carolina's 2006 Stanley Cup team.