Share All sharing options for: Clicks and Clippings: Lingering effects of Game 82

Yesterday's Annual Media Golf event brought us the first opportunity to hear from Carolina Hurricanes GM Jim Rutherford since the signing of Tomas Kaberle nearly 2 months ago. And, as I recall, it's been considerably longer since Paul Maurice spoke on camera. It seems the hangover of Game 82 back on April 9th still lingers.

Canes Country's Bob Wage was able to help his foursome around the green as well as get some one-on-one time with both Rutherford and Maurice and a couple of the players who were on hand; he will be posting stories over the next week. In the meanwhile, here's a few "first looks" at what the GM and others had to say when asked about the season ahead and specifically the new players.

After the jump, check out a full collection of video courtesy of WRAL.com, featuring Maurice, Eric Staal, Cam Ward and Anthony Stewart. Plus thoughts on the prospects and a just released video from the Canes' locker room last season.

The edited 2-minute story from the evening news: Jason Jennings: Canes look to use last season as motivation - WRALSportsFan.com Training camp opens for the Carolina Hurricanes on September 17th and it will be a much anticipated start to the season. Jason Jennings was at the Canes media day Thursday afternoon with plenty to talk about.

Meanwhile, back at the rink

There have been new arrivals over at Camp Brind`Amour since the week began, and if you head over to the Jamie Kellner's  "Week Two" set you can get a look at Zach Boychuk, Brandon Sutter, Derek Joslin, Nicolas Blanchard, and Brett Sutter. Based on previous years, the week following Labor Day is when we can expect some of the really familiar faces, especially those from more distant places. And so, yes, I plan be there Tuesday morning.

Here are some stories from the N&O related to the RCI workouts:

Canes Now - Zach Boychuk: 'This is a huge year for me' Boychuk said he trained this summer at the Crash Conditioning training center in Calgary along with Washington Capitals defenseman Mike Green, Edmonton Oilers forward Jordan Eberle and others. He said Brett Sutter and Brody Sutter also were in Calgary but trained with the Flames.

Canes Now - Justin Peters' goal the same: 'Make the team' "This is my sixth professional year with the Hurricanes and I'm coming into camp with the same attitude: make the team, just like I did last year,"  Peters said.

From the folks at ESPN.com, a relevant podcast this week: Hockey Today: 8/31 - ESPN Scott Burnside says goodbye to the Atlanta Thrashers and hello again to the Winnipeg Jets as he previews the Southeast Division with Craig Custance and John Manasso. AUDIO : 28 minutes total. They start with Winnipeg and move on to Carolina around 9 minute mark.

Also at ESPN.com and their "Insider" subscription series if you have it: Carolina Hurricanes projections for 2011-12 season where Hockey Prospectus' Richard Pollock and Corey Pronman examine the Canes, saying: Overall, this offseason didn't result in many splashes; Rutherford wants to continue to let his team grow together and become a force capable of delivering another Stanley Cup to the fans of Raleigh.

*** UPDATED Saturday 1:30pm  - Cory Lavalette's pre-season ranking of the prospects in the Carolina system just went up over at Hockey's Future. Lots of moving parts since before the last ranking before the draft: Zac Dalpe ascends to top spot among Hurricanes prospects - Hockey's Future

Hockey Prospectus | From Daigle To Datsyuk: Team USA, U-20 Camp - scouts two of the Carolina '09 draft picks who may compete in Calgary next winter. They will definitely represent the Canes in Traverse City next weekend.

Justin Faulk, Defense, Carolina Hurricanes: Faulk's skating has shown nice development as his mobility and overall speed looked a tick higher than where it was in his freshman season. The desirable hands, offensive instincts, and poise from the blue line were on display as usual and I was impressed by some of his defensive plays. He got a little too cute with the puck at times though that resulted in poor turnovers.

Austin Levi, Defense, Carolina Hurricanes: Levi was a prospect I heard whispers about last year about having some potential, although I never really heard an NHL source truly sell me on him. He was fine defensively, he's good physically, but I'd say he's still a bit of a work in progress and his offensive upside is minimal.

And Victor Rask is still creating a stir - mostly because it seems he will indeed be playing for the Calgary Hitmen for the 2011-12 season, barring something remarkable happening in Raleigh when he's here for Camp. Two more looks at his potential in the WHL:

CHL Countdown: Ten new faces in the Dub to keep an eye on - Buzzing The Net - Yahoo! Sports puts Victor Rask at #2.

The puckwebz have exploded with emotions, theories, proposals and even some real life accounts since the death of Wade Belak was made public Wednesday afternoon. All of which also implies the seriousness of concussions as a life-threatening injury. Here are a few varied posts to fill out some of these topics:

Crosby, Concussions and You - Pulling No Punches - August 2011 - Pittsburgh, PA A scientific perspective on Sidney Crosby 's prolonged recovery. Why would you want the face of your franchise, the face of the game you love, doing all of this normally dizzying, suffocating, nauseating, backbreaking work while his brain was starved for energy? This is not a broken nose. This is not about heart, or balls, or will. This is about chemistry, about the sophisticated and fragile nerve center controlling the marionette we call our bodies operating at half-capacity.

Bruins don’t expect Savard to play again - Boston.com On Sept. 16, Bruins veterans will report to TD Garden for physicals and fitness testing for the 2011-12 season, in which they will try to defend the Stanley Cup. Marc Savard will not be there.

Chip Alexander talked to two players and the coach who knew and played with Belak Thursday and shares their perspecitve: Belak news stuns Canes - NewsObserver.com Wade Belak once played for Carolina Hurricanes coach Paul Maurice while with the Toronto Maple Leafs.

TSN PodcastCentre - Jarkko Ruutu  (AUDIO 6:36) - Interesting, I think, to hear the reaction to post-retirement issue for NHLers from a familiar name who has seen enough of the rough stuff at the age of 35 that you know the topic hits home. He also is still looking for an NHL contract at this late date in the summer.

Alex Semin and The Curse of Elite Talent - Japers' Rink Alexander Semin's gifts are a blessing and a curse, and lately, it seems, there's been a lot of cursing about his blessings.

Dustin Byfuglien’s arrest for BWI not most shocking part of arrest report | ProHockeyTalk Hint: Byfuglien is going to be an even bigger load to handle on the ice. If you're going to the pre-season game vs Winnipeg in Charlotte September 25th may I suggest some signage material? Perhaps "Jumbo Jet" or a big welcome to the "Muffin Byfuglien"

The NHL is counting on it. In an effort to help develop elite young players, the league provides a grant to the CHL and to USA Hockey. This year, the league sent $9.8 million to the CHL earmarked for player development, education and wellness programs. It’s dispersed evenly among teams, with some getting bonuses for players drafted by the NHL. It becomes an NHL issue if those franchises are then using that money to lure players to break their college commitments.

Looking back while anticipating what's next

Remants from last season that are still surfacing include this NHLPA.com Video - NHLPA In the Locker Room with the Carolina Hurricanes has 3 minutes with Jamie McBain, Joe Corvo, Chad LaRose and Jay Harrison. Most interesting question to me was: Who is most underrated player?

This was one of NHL.com's Schuyler Baehman's Photos taken in the lobby at NHL HQ that he posted on twitter. It's one of my favorite photos of Jeff Skinner (taken the day before the NHL Awards) which I remember flashing on the TV screen when the Calder Trophy winner's name was announced in June. Skinner will be there in Manhattan at NHL HQ himself at the end of this upcoming week as the Carolina representative for the full NHL pre-season media tour. 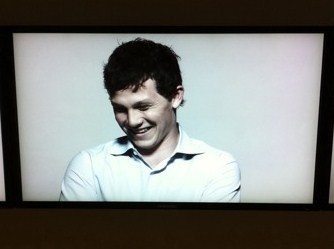 Finally, as the calendar works its way toward the first day of Training Camp, you might want to keep an eye on this link from the RBC Center's Live Webcam to see how they're preparing for the arrival of the 2011-12 season. Below I've captured the current image for comparison. (Ed note: Ignore the time/date stamp - seems they had a power outage and like any old VCR, it hasn't been re-set. To the best of my knowledge, none of what is shown even existed in 1970. ) 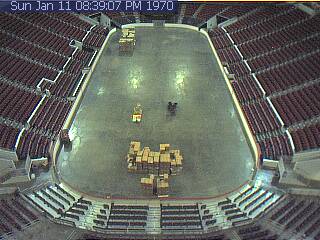