Share All sharing options for: Clicks and Clippings: TGIF

Tonight the Carolina Hurricanes host the Nashville Predators for the first preseason game in Raleigh this year. Sunday they'll be in Charlotte where they will play the Winnipeg Jets. We'll have a preview of tonight's game up later, but till then, catch up on what the team, its General Manager and those who are watching hockey are saying.

With the announcement that Jim Rutherford would be in Raleigh four more years, he momentarily eclipsed Jeff Skinner as the hottest hockey interview in North Carolina yesterday afternoon.

Jim Rutherford discusses his contract extension - WRALSportsFan.com Mike Maniscalco caught up with Rutherford to talk about the news.

Rutherford also took some time to speak to the guys at NHLHomeIce (XM) and then called in to speak with EJ Hradek and Deb Placey in New York for NHL Network's NHL Live.  I'll put those links here as they become available.

Finally, this was earlier this week: Rutherford sees Hurricanes as a playoff team - NHL.com's 30 in 15 Hurricanes GM Jim Rutherford believes the pieces are place for his team to get back to the playoffs for the first time since 2009.

After the jump, Cam Ward gets the start, lots of player profiles and season expectations for the Hurricanes, Brendan Shanahan is setting a new standards, why 72 is the new 26,  plus other clips to make sure you're in totally prepared for the hockey season upon us.

Remember that thunderous hit at the RBC Center last February that had some Rangers fans crying foul? Seems the ramifications are only just now becoming known: Canes Now - Marc Staal's slow recovery bothers brother Eric  No one feels any worse about that situation than Eric Staal. It was his big hit on his brother in a Feb. 22 game at the RBC Center that caused the concussion and also left Marc Staal with a knee injury.

With all the uncertainty about who will make the final cuts among the skaters, there really hasn't been much...

Here's some updates on the Canes #30.

Canes' Ward itching for start - Chip Alexander,  NewsObserver.com Cam Ward admits he was getting a little antsy. But Ward will be the starter in net tonight as the Hurricanes face the Nashville Predators at the RBC Center in their second preseason exhibition game.

Have you seen the photos of his new lid yet? Get a good look here: Cam Ward’s New Carolina Hurricanes Mask - InGoalMag.com The new design is described by the creator thusly:

[The design is] an evolution of Cam’s iconic Blackbeard character that I originally created for him back in 2008. This year the paint scheme features a pearl black base to compliment the ‘Canes alternative jersey while giving the mask more of an ominous vibe.

Plus this is a pretty interesting development down the goalie depth charts over in Sweden: "It is exciting that it has gone so well" - Ice Hockey - www.gp.se which quotes the Canes 2010 7th round draftpick, Frederik Andersen: "I do not care so much about percentages. I came to Frölunda and was hoping to play half the matches. But of course it is great that it has gone so well, he says."

Top fantasy sleepers from NHL.com's Fantasy News Fantasy Expert Matt Cubeta gives his list of 10 players flying under the radar at fantasy drafts. Dalpe makes #10, but there's so much errant reasoning in his assessment I just don't know what that's worth.

Dobber Hockey has a better read on the rookie in his analysis at Fantasy Hockey: Riding the dark horses and last-round steals - Puck Daddy

In a season where Calder possibilities are as abundant as news releases from out of Winnipeg assuring us that Dustin Byfuglien really is in great shape, it's nice to find a player like Zac Dalpe. This is a guy that many experts are pretty comfortable about not only making the team but eventually getting into the top six. A great centerman to put on your bench in the late rounds.

Some of his teammates know firsthand the microscope Jeff Skinner will be under this season. Eric Staal and Cam Ward also enjoyed tremendous success early in their careers as they became leaders of the 2006 Stanley Cup championship team in their early 20s. However, each underwent some growing pains in subsequent seasons as they learned to maintain that high level of play on a consistent basis while dealing with heightened projections.

Skinner ready for extra attention in Year 2 - NHL.com's 30 in 15 After his outstanding rookie season, Carolina Hurricanes forward Jeff Skinner is working to have the same level of success in his second season.

And just in on another forward who is preparing for the new season with extra intensity: Canes Now - Tlusty: 'I am giving everything I have'

"I don't to go out there like I deserve a spot,"  said [Jiri Tlusty ]. "I am giving everything I have.

"I had a great offseason. I know it was long for us and we didn't want it to be that long, but I had a long time to rehab and get myself back to 100 percent with my shoulder and my knee."

Turning to the Blueline

Canes Now - Gleason likes camp competition, even a fight  "There are always up-and-coming players," Tim Gleason said. "A player of my age and status has to sure you're on top of your game. My focus is on the first game of the season and all this can help me prepare. Competition from younger players pushes you and gets you going."

Canes' defense crowded - NewsObserver.com Much of the early talk in training camp has been about the young forwards battling it out for roster spots, and Canes coach Paul Maurice has said it will be a tough call. But Maurice added Wednesday that the same might be said for deciding on the top six or seven on the back end.

Curious to know more about "Gap Defense"? From a lesser known voice in local hockey media, Peter Koutroumpis, who wrote up this analysis of the new defensive system that Dave Lewis and Paul Maurice are preaching at camp.  Carolina Hurricanes focus on defense right from the start - Raleigh Sports | Examiner.com

American Prospects to Watch at NHL Training Camps | The United States of Hockey The thing about Justin Faulk, though, is that he just keeps surpassing expectations.

I got a lot out of this backstory on how and why Shanahan agreed to accept the most controversial job in hockey: Brendan Shanahan will stress player safety in new role – USATODAY.com Maybe it was appropriate that Brendan Shanahan was at Disneyland with his family when he was asked to be the NHL's discipline czar.

It's all about communication. Brendan Shanahan's 10 minute video of 2011-12 Rule Changes that was distributed throughout the NHL earlier this week.

And if you haven't seen the way Shanahan presents his decisions, well then welcome to a new era in NHL discipline media where the announcement first broke via twitter, meaning players, fans and media who follow his account, @NHLShanahan, were informed directly by a video of Shanahan explaining his decision -all at the same time. That would be, in a word, "transparency." By all accounts this is a tremendous improvement from methods employed by the previous Discipline czar Colin Campbell.

And the Flyers' Jody Shelley received a much harsher decision. He will be out for the remainder of the preseason (5 games) and 5 additional regular season games.

We say good-bye, they say hello

A Canes prospect who many expect will become his team's scoring leader if all goes according to the season previews: Rask is eager to begin WHL career

"It was really cool to be there," said Rask, who strutted his stuff in the NHL prospects tournament in Traverse City and advanced to main camp in Raleigh, N.C. "When I was younger, I watched them on TV and now I'm playing for them. It was pretty cool. "It is a big difference. They're so much stronger and bigger. But I think if I keep doing my thing and just keep working hard, I can maybe have a chance to play in the NHL."

Back in Sweden, SEL's Skelleftea bring home NHL reinforcement - Hockey Express where the team says: [Mattias Lindstrom] is our player, we have an agreement with him, says Skellefteå's sports director Lars Johansson .

Sorry, but this had to be done at some point: 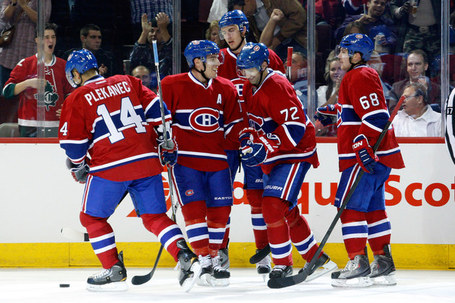 MONTREAL, CANADA - SEPTEMBER 20: Erik Cole #72 of the Montreal Canadiens celebrates his second period goal with team mates during the NHL pre-season game against the Dallas Stars at the Bell Centre. (Photo by Richard Wolowicz/Getty Images) Click to enlarge

Both Manny Legace and Troy Bodie are working on PTOs with Vancouver and Winnipeg respectively. No word on where Sergei Samsonov will end up. He turns 33 next month..

This is what Manny Legace, 38,  looks like where, as this story explains, he gets Another tour of duty for veteran goalie - The Vancouver Province. This veteran may be rusty, but he is certainly flexible. 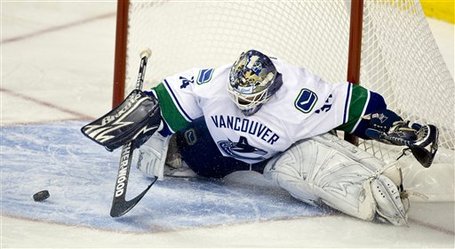 From Tuesday night vs Calgary, where Legace gave up 3 goals on 11 shots (via SBNation)

Getting in the mood

One of the best I've seen from this very very funny site in a while, Down Goes Brown: If NHL fans had their own training camp. It starts here and only gets better:

OK, let’s get started. First up is special teams. Now imagine your favourite team is on the powerplay. What are you fans going to be doing? Yes, that’s right, you’ll be yelling "SHOOOOT" for the entire two minutes. Let’s all practice that right now. Hey, good job! The Jets fans are a little rusty, but the rest of you guys are in mid-season form!

I wish I could embed this video to make it easier for you to sample this footage from TSN.ca's coverage of the emotional night in Winnipeg Tuesday. For any fan of hockey this is rich, so much so that it even made me, who was as cynical as they came when the Thrashers were plucked out of Georgia, a little dewy eyed. Welcome Home: opening moments from the Jets debut in Winnipeg .

Canes will be there at the raucous MTS Center next Wednesday and it's possible (though unconfirmed) that TSN's broadcast might be aired on NHL Network. I'll let you know when I hear more.