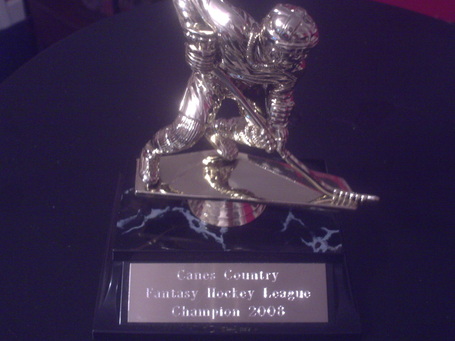 As we approach the start of hockey season, of course it's time once again for the Canes Country Fantasy Hockey Leagues to get going. Last year we ran five leagues which included a total of 72 teams. We will have at least that many again this season.

All last season's participants have recently been sent invitations. If you played last year and did not receive an invite to play again, please email me to let me know. If you did not participate last year and would like to this season, send me an email at canescountry@gmail.com and we will get you signed up. We have both rotisserie and head to head leagues.

Congratulations to last year's champions! As is our tradition here, each winner will receive a semi-huge, brand new trophy to commemorate their tremendous achievement. (Winners, please email me your mailing addresses so that I can send your respective trophies to you in the mail.) I have just ordered these and have not received them yet, so please allow a couple of weeks for delivery.

Do you think you have what it takes to challenge one of these guys? Send me an email and sign up today.

I'd also like to mention that C- Leaguer runs a league that I have participated in for several years called Section 320, so I would be remiss if I failed to also congratulate Bug's Buggerer's, who seems to win that league almost every season.

Speaking of fantasy hockey, SB Nation has its own fantasy hockey site to help out fantasy players. It's called Fantasy Hockey Scouts. They recently asked me some Hurricanes related questions, I responded, and the article can be found at the following link:

Finally, another great resource for fantasy players is Dobber Hockey. We have done some work for them in the past and they know their stuff, plus they have a number of free tools to use if you're a stat junkie.

Good luck to all!