Get the latest Carolina Hurricanes news with Canes Country 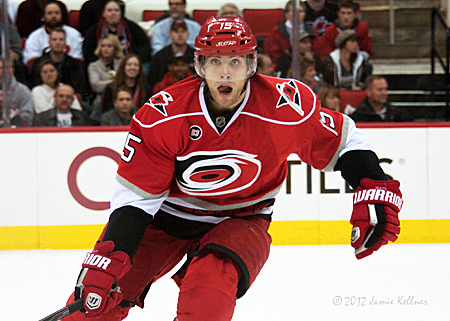 Carolina Hurricanes forward Tuomo Ruutu was on the ice for two shifts during Monday's game against the Montreal Canadiens before skating to the bench in pain, sidelined with an upper body injury and unable to return to the game.

After an MRI today, the team has reported that Ruutu is expected to miss three weeks recovering from his injury. Per Michael Smith on twitter:

@MSmithCanes: Tuomo Ruutu is expected to miss three weeks with an upper-body injury.

Ruutu currently leads the Hurricanes in goals (17) and has recently been playing on the Hurricanes top forward line with captain Eric Staal and Jiri Tlusty.

As an unrestricted free agent, Ruutu has also been one of the most discussed trade targets across the NHL as the February 27 trade deadline approaches in two weeks, or one week before Ruutu's expected return. Hurricanes GM Jim Rutherford recently stated that he is interested in re-signing the Finn to a contract extension, and talks were expected to continue this week.

The N&O's Chip Alexander has also published an update on Ruutu's injury which includes a quote from Rutherford stating that the injury will not impact the organization's plans to re-sign him.

The Hurricanes returned from their three-game road trip last night and did not practice today; practice is expected to resume tomorrow. The next game will be against the San Jose Sharks on Friday here in Raleigh.