A Full House for Hurricanes Casino Night (and Other News)

Share All sharing options for: A Full House for Hurricanes Casino Night (and Other News)

It was a full house at the RBC Center on Sunday night as the Carolina Hurricanes Kids 'N Community Foundation hosted its seventh annual Casino Night and Wine Tasting. Sold out for the first time since its inaugural event, the 600 fans in attendance were treated to wine tasting from local vendors, non-cash casino games, silent and live auctions, and an opportunity to mingle with Hurricanes players, coaches and staff.

More from the casino floor, and other Hurricanes news as we survive the trade deadline and close out February, after the jump.

Casino Night and Wine Tasting is one of the flagship fundraisers for the Hurricanes Kids 'N Community Foundation, which supports youth sports, education, and health initiatives across North Carolina through its grants. Assisted by sponsorships from local companies such as Convergence Technologies and thanks to generous support from passionate Hurricanes fans, Casino Night proceeds have topped $200,000 for the last two years.

All Hurricanes players on the current roster (including those out with injuries) were on hand to man casino tables, resplendent in white dinner jackets (stick tap to Mary Catherine Benson, Assistant Director of Kids 'N Community, for the dinner jacket idea, they were BOSS).

The silent auction featured almost 100 items and included NHL memorabilia, golf packages, and local services. Spotlighting the silent auction are the player baskets, which typically include a variety of game-used equipment along with unique personalized items. Avid sportsman Tim Brent included fishing and hunting gear in his auction basket. Justin Faulk included a Kindle Fire with some of his favorite books and magazines pre-loaded. Jay Harrison included an iPod shuffle with a preloaded "top 20 songs I'd take to a deserted island" playlist.

The highlight of the evening is the live auction, where the high rollers try to out-bid each other for one-of-a-kind gifts and events. Popular items are the Cane for a day (practice, lunch, warmups, and post-game meet and greet), bowling with the boyz (Skinner, McBain, and Faulk), dinner with the captains and the keeper, and trip with the team (a fly-away trip including airfare, accommodations and a Canes game).

There's a tremendous effort that goes into making Casino Night a success, from the event planners to the RBC Center staff, to the coaches and players who donate their time, energy, and creativity, and the Kids 'N Community team. Again this year, I personally thank them for a job well done. It's a pleasure to be able to support such a worthwhile organization.

Last but hopefully not least, here's my photo album from the event. Several Canes Country regulars were making the most of their evening as well, hopefully a few will weigh in here with stories of their own.

With all relatively quiet on the trade deadline front this year, a few recaps:

News & Observer: Canes Now - Spacek, Allen happy not to be on the move

WRAL Sports Fan: Canes say 'no' at the deadline

NBC Sports: Pro Hockey Talk: Did the Hurricanes blow a chance to rebuild?

And with an eye toward the future, E.J. Hradek on NHL.com: Free-agent class will make for Interesting summer

Most of the Hurricanes took in a typical between-game practice today at Raleigh Center Ice. Injured players Chad LaRose and Brian Boucher skated with the team. Patrick Dwyer, Joni Pitkanen, and Tuomo Ruutu were off the ice (although Ruutu was later spotted in the lobby playing bubble hockey, all part of an upcoming interview with Finland's MTV3). Missing from practice was one Bryan Allen, he of last night's game-winning goal and graceful goal celebration. Allen was just taking a maintenance day, but not before pulling a few shenanigans on his teammates. As reported by Chip Alexander in his Canes Now blog (along with a few others on twitter), Allen gathered his teammates' street clothes and dumped them in the floor of the locker room. Not one to let a deed go unnoticed, Anthony Stewart tweeted a photo: 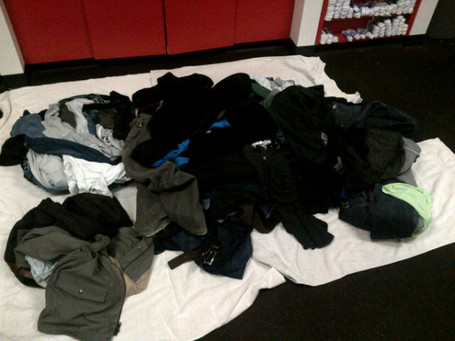 To which Tim Brent replied:

Down on the Farm

Today in Kirk Muller's post practice interview, he mentioned that goaltender Brian Boucher may see time in Charlotte on a conditioning stint as he continues his recovery. Paul Branecky writes about the goalie situation, along with some kudos for the Checkers special team prowess:

From NHL.com, an update on a great season from prospect Frederik Andersen:

NHL.com: Across the Pond - Trio of young goalies step to the forefront in Sweden

About the new coach, from the Hockey Writers:

And a little news from the old coach, after a couple of months of silence, Paul Maurice was interviewed today on NHL Home Ice. Audio

WRAL Sports Fan: Even off the ice, Harrison can play

And finally, it's February 29th, you know what that means... wishing a happy 7th Birthday to Cam Ward, and a happy 6th Birthday to Bobby Sanguinetti!

TSN.ca: On The Record: Cam Ward