Share All sharing options for: Game Analysis: Hurricanes At Bruins

The Carolina Hurricanes accomplished something never before done in franchise history, sweeping the season series from the Boston Bruins with a 3-0 victory in Beantown Thursday. Cam Ward made a franchise-record 47 saves in earning his third shutout of the year, while Eric Staal, Tuomo Ruutu and Brandon Sutter scored for the Canes.

Carolina improved to 19-25-9 with 47 points, putting them in a three-way tie with the Canadiens and Islanders for last place in the Eastern Conference.

1. Playing Zdeno Chara always seems to bring out the best in Staal. He has proven, time and again, that he's not afraid to battle the giant defenseman in every corner of the ice, and the enthusiasm in which he does it trickles down to his teammates. Drayson Bowman took a huge hit from Chara along the boards, but popped right up looking no worse for wear. Staal now needs to apply that effort against every defenseman he faces.

2. Sutter put it all together last night, playing a big role in neutralizing the Boston attack while registering two points, including his 12th goal of the season. Outside of struggles in the faceoff circle last night (see "Minus"), Sutter is looking more and more like the next incarnation of Rod Brind'Amour. He even showed off his leadership by throwing Bruins goon Milan Lucic (yes, I know the definition of goon is a guy that can't play, but Lucic does goon it up in lopsided losses) in a headlock after the Boston forward went have Staal late in the game.

3. If they ever remake Rocky III, wouldn't Lucic makes a spectacular (white) Clubber Lang? Not only does Lucic think he can bully his way to wins — or future wins by attempting to intimidate at the end of games — but with a mohawk he could pull off a pretty good Mr. T., don't you think? 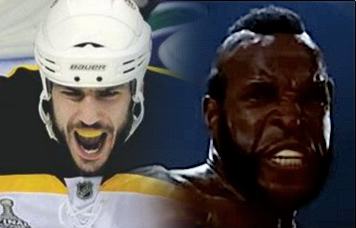 59 — Games Staal had gone without a first-period goal until he one-timed a Jiri Tlusty feed past Tuukka Rask Thursday to make the score 1-0 at 11:51 of the opening frame. The last time Staal tallied in the first period was when he opened scoring on the power play against Tampa Bay on March 26, 2011.

Cam Ward — There aren't many nights when a goalie sets a franchise record for saves (47) and has the most stops in a shutout in the entire league this season, yet gets lost in the mix among the entire hockey media. But that's what happened to Ward last night, thanks to Sam Gagner's historic eight-point night Thursday for the Oilers. I would argue it wasn't even one of Ward's best performances of the season — he can thank the players in front of him for limiting second chances and not allowing many Grade-A scoring chances — but the fact remains that Ward made all the stops he needed to and built on his fantastic January.

Jeff Skinner — Another one of those nights where it's hard to find fault in anyone. But the Canes struggled in the faceoff circle, winning just 30 percent, and Skinner was a part of that. He won just four of 16 draws (for what it's worth, Brandon Sutter was 1 of 8 and Staal was 6 of 19) and, unlike Sutter and Staal, was kept off the score sheet.