Share All sharing options for: Update From Charlotte: Checkers 6, Rivermen 2

(We are very pleased to announce that Tim Donelli will be joining us as a correspondent and will be covering the Charlotte Checkers for Canes Country as they push to the playoffs and hopefully beyond. Tim is Team Chaplain for the Checkers as well as the Southeastern USA Team Leader for Hockey Ministries International. He also helps with the HMI summer camp coming up soon in Raleigh, Raleigh Camp Website. Tim is also a freelance reporter for the Charlotte Observer and the Greensboro News and Record. We look forward his insight and perspective.)

CHARLOTTE HAS 12 GAMES LEFT TO SECURE AN AHL PLAYOFF BERTH

(Charlotte, NC – Wednesday, March 21) The Charlotte Checkers of the American Hockey League are coming down the stretch in their second season as the top affiliate of the Carolina Huricanes. But with 12 games remaining in the 2011-12 season, the Checkers are in a much different spot than they were at this same time last season.

Last March a playoff berth in the AHL was not in doubt. In fact, the Checkers made the playoffs and knocked off the favorite Hershey Bears and Wilkes-Barre Scranton Penguins en route to the AHL semi-finals. The eventual AHL champions, the Binghamton Senators, finally ousted Charlotte in four games. The 2010-11 season was a great start for Charlotte in what will hopefully be a long-term relationship between the NHL Canes and the AHL Checkers. 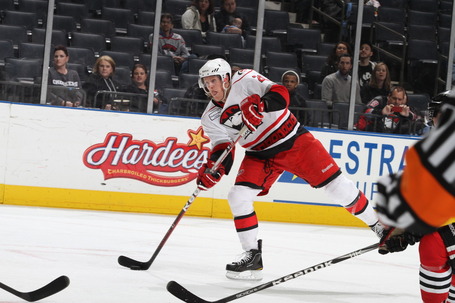 Charlotte (33-23-3-5) boosted their playoff hopes for this season with a big 6-2 victory at Time Warner Cable Arena Wednesday against the Peoria Rivermen (36-27-2-1). Peoria is the AHL affiliate of the NHL's St. Louis Blues.

Zach Boychuk had a pair of goals for the Checkers, while Chris Durno, Riley Nash, Chris Terry and Matt Pistilli had single tallies for Charlotte.

Goalie Mike Murphy earned his second win in his last three starts, which included a shutout on March 11 vs. the Chicago Wolves, and a two-goal yielding victory Wednesday. Murphy has had two stints with the Hurricanes this season, coming in to relieve Cam Ward on two different occasions. Murphy played 36 minutes in those two NHL efforts and did not yield a goal.

After losing three games in a row and four of their last five, the Checkers called a "players-only" meeting after Tuesday's 5-2 home loss to Peoria. Murphy credited that meeting with helping to turn things around Wednesday. "After our meeting last night we talked about everyone working together, and that's the way we can play so it was huge for us," he said. "It wasn't a flukey win and we worked hard every single minute of that game and it feels great."

The win snapped a three game losing streak and allowed the Checkers to finish a six-game homestand at 2-4-0. After the win, Charlotte found itself in seventh place in the AHL's Midwest Division of the Western Conference with 74 points. Hovering right below the Checkers in the conference standings are the Rochester Americans (72 points), the San Antonio Rampage (71 points), and the Lake Erie Monsters (71 points). The top eight teams in the conference qualify for the post season.

Until about a month ago, it looked like the Checkers would duplicate last season's regular season and clinch a playoff spot early. Charlotte had held first place in the AHL's Midwest Division of the Western Conference almost the entire season. Future Hurricane hopefuls including Brett Sutter, Drayson Bowman, Zac Dalpe, Mike Murphy, Justin Peters and Jerome Samson all shuffled back and forth from Charlotte to Raleigh, but the Checkers kept winning and held their top spot in the division.

But about three weeks ago the Checkers started to slump, and lost their division lead. Not scoring enough goals was the major reason. Prior to Wednesday's breakout win, Charlotte had only scored 14 goals in last eight games.

Checkers coach Jeff Daniels is hopeful that his team's six-goal effort Wednesday will be a springboard to more scoring, as Charlotte seeks to lock up a playoff berth in the final three weeks of the regular season. "Obviously we needed the win," he said. "We needed to get some confidence in that room from a win, but also from a scoring standpoint."

After Durno gave Charlotte a 1-0 lead early in the second period, Nash came back three minutes later to roof a shot by Peoria goalie Jake Allen for a 2-0 Charlotte advantage. Nash, who played his college hockey at Cornell and is a former No. 1 draft pick of the Edmonton Oilers, hasn't been able to figure why the Checkers have been in a scoring drought of late. "It's really tough to put a finger on it and why it's been happening," said Nash. "I have faith in the locker room and that the guys will pull through."

Charlotte's fight for points to secure a playoff spot continues this weekend with back-to-back games with the Hershey Bears (Washington Capitals affiliate) in Pennsylvania Saturday and Sunday. The Checkers have 12 game left in the regular season, with eight on the road and only four at home.

"Hershey's always been a big rival of ours and we like playing against them," said Boychuk. "They've got some skilled players and it seems every year they make a run for the Calder Cup. It will be a good matchup."