Share All sharing options for: Crunch Time For Checkers

(Story by Canes Country correspondent Tim Donelli. Tim is Team Chaplain for the Checkers as well as the Southeastern USA Team Leader for Hockey Ministries International. He also helps with the HMI summer camp coming up soon in Raleigh, Raleigh Camp Website. Tim is also a freelance reporter for the Charlotte Observer and the Greensboro News and Record.)

CHECKERS PLAYOFF PICTURE OUT OF FOCUS

(Charlotte, NC – Tuesday, April 10) After losing every game in a four-game homestand last week, the American Hockey League playoff hopes for the Charlotte Checkers (35-28-3-6 for 79 points) are hanging by a thread. In all but one game the Checkers were dismal and were outscored 16-5 in the four games, putting their playoff hopes on life support.

The Checkers enter Tuesday's AHL action in 11th place in the AHL's Western Conference, three points behind the Lake Erie Monsters (Colorado Avalanche NHL affiliate) and the Peoria Rivermen (St. Louis Blues NHL affiliate) for the eighth and final playoff spot in the conference. Charlotte also has two games in hand on both the Monsters and the Rivermen.

The Checkers have four regular-season games left, all on the road. They face a must-win game tonight in Rockford, Illinois against the Ice Hogs (Chicago Blackhawks NHL affiliate). Charlotte will then close out the regular season with three games in three days. Friday the team is in Peoria, Saturday back to Rockford and then Sunday in Milwaukee.

Just six weeks ago Charlotte appeared to be in control of winning the Midwest Division, with making the playoffs an after thought. Then something changed. The Checkers stopped scoring, and winning. What has baffled the Charlotte coaches, players and fans is the Checkers scoring drought the past six weeks, and their inability to win at home. In their last ten home games, the Checkers have scored just 20 goals (two goals per-game average) and gone 2-8.

When you look at the Checkers roster, names like Zac Dalpe, Chris Terry, Zach Boychuk, Jerome Samson and Brett Sutter dot the lineup. All have been proven scorers in the past in the AHL, and all but Terry have spent time with the Hurricanes this season.

With the Hurricanes having already been eliminated from the National Hockey League playoffs, the last thing the Carolina organization wants to see is their AHL affiliate not make the playoffs as well. In addition, many Hurricanes fans came to Charlotte last season to watch the Checkers in the AHL playoffs as Charlotte made it all the way to the Eastern Conference finals. Those fans would surely love to have that opportunity again to watch some playoff hockey.

The Checkers playoff picture was looking up after Charlotte won two big road games in Grand Rapids and Peoria on March 30 and March 31. With the team coming back to Charlotte for a four -game homestand, everyone thought the Checkers would all but clinch a Western Conference playoff spot before closing the regular season with four games on the road.

But the Checkers performance in the four-game homestand showed few signs of a playoff contender. Charlotte was shut out 4-0 by Milwaukee (Nashville Predators AHL affiliate) on Tuesday, April 3 in the first game of the homestand. Carolina Hurricanes General Manager Jim Rutherford and Director of Defenseman Development Glen Wesley were both in attendance at Time Warner Cable Arena, and neither could have been pleased with what they saw.

Disappointed Checkers coach Jeff Daniels was asked after the game about his team's effort. "There wasn't one," he said. "We have to show up Thursday night (Charlotte's next game). We're a desperate team and we can't afford games like this."

The Checkers did receive some unexpected help prior to game two of the homestand when forward Drayson Bowman was assigned to the Checkers from Carolina. After a lengthy stint with Carolina, Bowman was expected to finish out the season with the Hurricanes and then join the Checkers for their final week of the regular season. But with Charlotte struggling and the playoffs in jeopardy, Rutherford and Daniels made the decision to send Bowman to Charlotte a bit earlier than possibly planned. 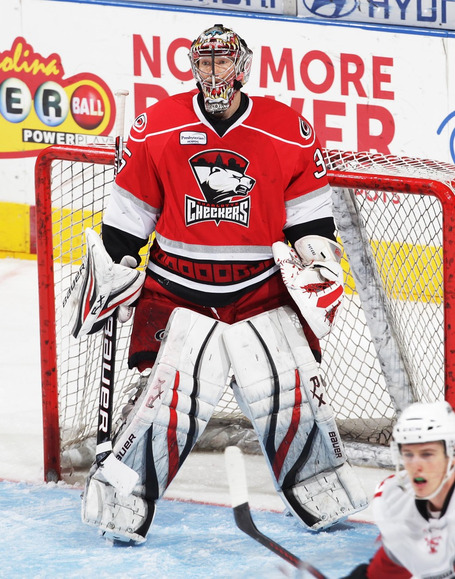 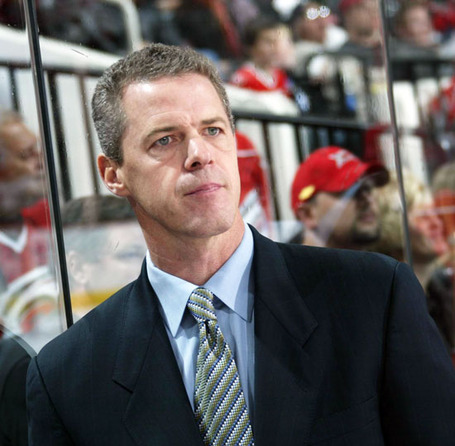 Two days after being shut out 4-0, Charlotte dropped a 4-2 decision to the Admirals on Thursday, April 5 in the second game of the two-game series. The Checkers were outscored by Milwaukee 8-2 in the two losses.

The Abbotsford Heat from British Columbia, and the AHL affiliate of the NHL's Calgary Flames, then rolled into Charlotte for a pair of games against the Checkers. Unfortunately the results were the same. Charlotte played its best game of the homestand on Saturday, April 7, but it still wasn't enough as they dropped a close 2-1 verdict to the Heat.

Justin Peters was strong in goal for the Checkers making 38 saves, and Mathieu Roy scored the lone Charlotte goal. Krys Kolanos scored both goals for Abbotsford.

"I think the biggest thing was that our execution tonight was a little sloppy, and it's definetely not for a lack of effort," said Peters. "The guys are trying hard but it's the little things in the game that seem to be the difference at the end of the game."

Daniels was asked after Saturday's 2-1 loss to the Heat if he was surprised that some of his top scorers like Terry, Samson and Dalpe have struggled to find the net during the Checkers current slide. "Yes, but I don't want to put everything on their shoulders because there are a lot of other guys who can produce and right now we're not," he said. "If you look over the last month or so we're averaging just about two goals a game probably. If you take away a couple games where we've got five or six but most of the time we're looking at two or one, and right now one's not good enough."

The Checkers had one more chance to salvage a win in the four-game homestand when they hosted a rematch with the Heat on Easter Sunday. Unfortunately Charlotte saved its worst performance for last. Abbotsford routed the Checkers 8-2 in their regular-season home finale. (See box score below) Mike Murphy started in goal, and after yielding five goals was replaced by Peters.

Riley Nash and Brett Sutter had the Charlotte goals, and Kalanos had a huge five-point game for the Heat with two goals and three assists. So poof! The four-game homestand was history and the Checkers unfortunately couldn't earn a point.

For those of you who are optimists, and I am also one, there is still hope. Four wins or maybe three on Charlotte's season-ending, four-game road trip will allow the Checker to sneak into a playoff spot. The Checkers have also played well on the road this season (17-12-2-3). Jeff Daniels teams have only missed the playoffs once, and this Checkers team has talent and character.

There is one other thing I also want to mention. Having covered the Checkers the past two seasons, I have a great deal of admiration for Coach Daniels and his Assistant Georgie Kinnear. They are very professional at what they do, almost always making the right decisions and showing an amazing commitment to "attention to detail." The two will leave no stone unturned in trying to get the Checkers into the playoffs this week.

If the Checkers can start scoring goals, and they need to start this week, they can squeeze into the playoffs. And if they do squeeze in, their opening-round opponent will take one look at Charlotte's roster and will quickly realize that this can be a very dangerous team.

Last season the Binghamton Senators made the playoffs on the final day of the regular season. The Senators went all the way and won the AHL's Calder Cup. Lesson? Just get into the playoffs and anything can happen.

"The thing we have to do right now is put this behind us and look forward to these four games this week," said Charlotte forward Matt Pistilli. "We have to expect nothing less than to win all those games."

It all starts tonight in Rockford.