The Carolina Hurricanes are in Canada's capital for a match-up tonight against the Ottawa Senators.

The Hurricanes (31-32-16, 78 pts.) were officially eliminated from playoff contention with Friday's 4-3 overtime loss to the Winnipeg Jets, and suffered a lackluster follow-up performance Saturday in a 5-0 shutout loss against the New Jersey Devils. With three games remaining, the opportunity to close out the season on a positive note begins today.

Meanwhile, with weekend wins over the Flyers and Islanders, the Senators (41-28-10, 92 pts.) have clinched a playoff berth, although they still have an opportunity to climb up in the Eastern Conference standings if they continue to win their remaining games.

Game notes follow, along with a tip of the hat to a great outing on Sunday at the inaugural Hurricanes Alumni Fantasy Game.

Tonight's game will be broadcast on the normal Hurricanes channels, Fox Sports Carolinas in HDTV, and radio on WCMC 99.9 The Fan. Game time is 7:30 pm, and we'll have the game thread open at 7:00 (promise). See you there. 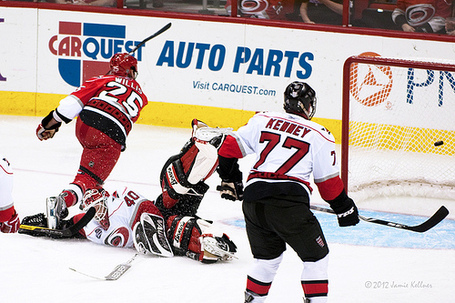 Shane Willis makin' it rain as he blasts a shot past Tripp Tracy (author's photo).

Event proceeds benefitted the Hurricanes Kids 'N Community Foundation. Admission was free for fans, and over 3,000 made their way to the game. Arena staff had to open additional seating sections after the East Priority area overflowed. Fans brought signs, chants, cheers, and over $11,000 in door donations to KNCF. All in all, the event raised just over $50,000 between donations, player registration, and silent auction sales.

A sign in the arena said "Make it Rain, Shane." Shane Willis wasn't showered by hats when he tallied three goals in Sunday's game, but he certainly deserved a tip of the hat for his efforts both on and off the ice. Willis, who serves as the Hurricanes youth and amateur hockey coordinator, led much of the planning and organization for the inaugural event in addition to playing in the game and torching three shots past the glove of Hurricanes TV analyst Tripp Tracy.

The Hurricanes organization took tremendous efforts to make the experience as game-like as possible for fantasy participants with CanesVision production, in-game entertainment, anthem by Katherine Fritsch, and player introductions and game play-by-play by John Forslund. As usual, there was none better than Forslund as he not only called every second of the action, but also provided color commentary on all the players (along with his usual witty commentary on the game action). TV partner Tripp Tracy was in net for the White team. Tracy was mic'ed up for the last five minutes of each period, which gave Forslund ample opportunity to check in with pressing questions about Tripp's hydration level and the status of his groin.

Back-stopped by the aforementioned Tracy and led by the offensive prowess of Jesse Boulerice (who had a hat trick himself), the White team (led by Captain Rod Brind'Amour and coach Dave Lewis) jumped out to an early lead over the Red team (led by Captain Ron Francis and coach John MacLean) and the score was 7-1 after 40 minutes. A late rally by the Red team brought the score close, and toward the end of the game John MacLean emptied the bench and sent the whole team out on the attack, but Tracy and the White team defended the onslaught and held on for a 9-6 win.

And for the can't miss highlight of the game... late in the game as the Red team launched its comeback, and while his family (including son Eric) and fans watched, elder statesman Henry Staal ripped a shot into the net and launched a goal celebration for the ages, arms raised as he sailed across the entire length of the ice before leaping into the glass. If you ever wondered where his son got his intensity and compete level, wonder no more (here's the gif file).

My photo album for the event can be found here (warning, this is a BIG album, I tried to get shots of as many participants as I could).

For the participants, hearing their names announced as they skated onto the ice to the cheers from the crowd, then playing alongside some of the biggest legends in Hurricanes history, made for the thrill of a lifetime. Given the success and interest, it's certainly hoped that this event can become an annual tradition.