At the beginning of the season, the Hurricanes had nine active defensemen on the roster which meant that certain players had to perform well to stay in the lineup. One of those players was 29 year-old defenseman Jay Harrison. Harrison spent most of the 2010-11 season as a depth/third pairing defenseman and many thought that he could end up being a waiver wire victim with the Hurricanes blue line being so crowded. Little did we know that Harrison would end up not only staying on the team for the entire year, but have a career season and regularly play in the Hurricanes’ top four, as well.

Harrison set career highs all across the board and was a nice story for the Hurricanes this season, but the question going around everyone’s minds is whether or not he would be a top-four defenseman on a contending team. My opinion of him before this year was that he was a good depth defenseman, but I was unsure of how he would perform in a tougher role. Well, he found that out this year as the Hurricanes really tested his limits. He played about 20 minutes a night, was used on both the powerplay and penalty kill and regularly faced tough competition alongside rookie Justin Faulk.

His performance this season marked a big improvement from the previous two years but Harrison ceiling is only so high and that was proven this year as he could only do so much while playing in the top-four.

After the jump, we will take a closer look at Harrison’s season, examining both the ups and downs.

The biggest surprise with Harrison this year was his offensive output. He mentioned before the season that he was working on his shot and it must have paid off because he led all Carolina defensemen in goals with nine. He was also second among defensemen in points with 23, trailing only Jamie McBain, and his scoring rate at even strength per 60 minutes was the third highest among blue-liners. The increased ice-time likely played a role in Harrison having the opportunity to put up more points, and it also helped that he was used on the second powerplay unit for most of the season. Harrison also led all Carolina defensemen in shots on goal, which shows that he was very effective as an offensive force from the back-end.

Most of the positive aspects of Harrison’s season came from an offensive standpoint, which is surprising because he is known to be the more defensively responsible half of his pairing with Faulk. One thing that might be forgotten is that for most of the first two months of the season, Harrison was paired with Tomas Kaberle in a more sheltered role. That pairing was pretty successful and it’s mostly because Harrison feasted on the softer minutes. This is evidenced by his Scoring Chance With or Without You report, which shows how a player faired with and without a certain teammate on the ice. 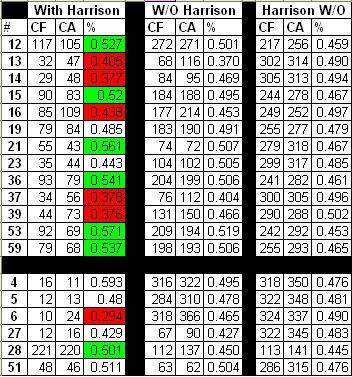 Scoring chances were going in the Hurricanes favor when Harrison and Kaberle were paired together. With that being said, Harrison also played well with Faulk and just about broke even with him in scoring chances, which is very good news. As it was mentioned earlier, those two were used in a tough-minutes role (albeit secondary) and Harrison was perceived to be the more defensively responsible one and he showed that in a way by blocking the second most shots on the Hurricanes. He was also on-ice for the third fewest goals against among Carolina defensemen.

However, the area that Harrison struggled in was preventing shots and scoring chances.

Harrison was a good offensive presence, but he gave back just as many scoring chances in his own end as he and Faulk were on ice for the highest amount of chances against relative to their ice-time. They were playing big minutes but the volume of chances they were surrendering is alarmingly high.

That definitely played a part in Harrison having a -10 rating despite producing a considerable amount of offense. He was also well under the .500 mark in corsi, which means that he was spending a lot of time in his own end. He is capable of pushing the play forward but he could have been overwhelmed a little bit from having to deal with opposing team’s top-six forwards on almost a nightly basis. Remember, this was Harrison’s first season playing these kind of minutes and he had some trouble adjusting to a tougher role once Kaberle was traded.

Harrison also put the Canes into some difficult situations as he had the third most penalty minutes on the team, took more penalties than he was able to draw and he also was tied with Jamie McBain for the team defense lead in giveaways (40). The latter stat could be a bit misleading because Harrison handled the puck a lot, but he definitely had his share of miscues. Harrison’s biggest issue this year, to me, was net coverage because opposing forwards seemed to be able to outwork him for position in front of the net to set up a screen or get to rebounds easier. This was a big problem for him on the penalty kill, where he was on-ice for 14 goals against while playing on the second unit.

Harrison is in the first year of a two-year contract which pays him $650,000 this season and $750,000 next year. The Hurricanes were paying near the league minimum for a defenseman who played top-four minutes and played on both special teams units. Factor in Harrison’s nine goals and 23 points and you’ve got yourself quite a bargain.

This was about as good of a season for Harrison as most people would expect. Seeing how he was projected to be a depth defenseman and more of a PK specialist, he did a lot more than what most expected and might actually have a more substantial future with the Hurricanes. Should he be playing this many minutes, though? Him and Faulk were able keep their heads above water as a defense pairing but the amount of scoring chances they give up is alarmingly high. Harrison is also going to be 30 in November, so what we’re seeing right now is probably what we’re going to get for the remainder of his career. I see Harrison as a useful piece but it’s tough to say that he’s an ideal top-four defenseman on a contending team.

What grade would you give Harrison’s performance with the Hurricanes this season? If he exceeded your expectations, give him an A. If he met them, give them a C. If he completely let you down, give him an F. Explain your vote and discuss whether or not you see Harrison as a key member of the Hurricanes defense corps as they continue to rebuild.