Chad LaRose had to go through four leagues and five different teams before making it in the NHL, so he knows a thing or two about playing a lot of different roles. For the Hurricanes this year, LaRose was used in just about every different role you can imagine for a winger. He played on every line at least once, was a regular on the powerplay, killed penalties and was utilized in tough situations at times, too. The result? LaRose had a career high of 32 points, matched a career-best 19 goals and this was despite missing 15 games with an upper-body injury. LaRose has always been praised for being a versatile player and he showed that this season by effective in most of the roles he was assigned. The Hurricanes had a severe need of wingers who could produce offense this season while LaRose isn’t exactly an ideal top-six forward, he was able to help the Canes in many ways this season.

Players like LaRose are the kind of guys that a lot of teams have but that doesn’t mean that what they do isn’t important or beneficial. LaRose doesn’t have the best hands, he will probably never top 35 points in a season and is best suited for a third line role, but it is hard not to like what he does for this team and he was one of Carolina’s better forwards this season.

After the jump, we will review the ups and downs of LaRose’s season.

Getting to play in the top-six more often has its perks and it paid off for LaRose as he had the second highest goals per 60 rate at even strength among the team’s regular forwards. LaRose’s .91 goals per 60 minutes was his highest goal rate since 2008-09 and a huge step forward from his scoring rate last season. Had it not been for the injuries, LaRose would have been on pace to finish the season with 20 goals for the first time in his career. LaRose’s skillset isn’t the best and he lacks a dangerous shot but he showed significantly more finishing ability this season than he did in previous seasons.

The other area LaRose excelled in was being able to push the play forward which was something the Hurricanes struggled with as a team. His Corsi relative rating was the fourth highest among forwards and the Hurricanes were consistently creating more scoring chances at even strength when he was on the ice. This looks even better when you consider that he was able to do that while playing tough minutes. LaRose started only 45% of his even strength draws in the offensive zone and was usually matched up against difficult opponents. He regularly played on either Eric Staal or Brandon Sutter’s line, which meant he got the tough matchups and he was able to create offense despite playing in slightly unfavorable conditions LaRose was actually the highest ranked forward on the team in scoring chances adjusted for zone starts. Basically, LaRose was able to create offense and get shots on goal no matter where he was playing and his WOWY reveals some information that might surprise a few fans. 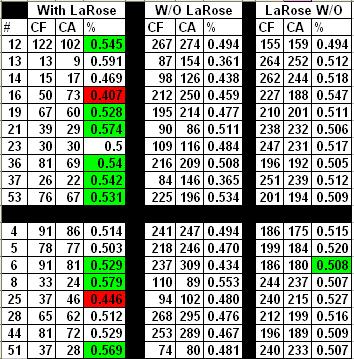 LaRose was able to boost almost every line he was placed on, and one of the most successful combinations was him and Eric Staal. Chances at even strength were going in the Hurricanes’ favor when those two played together and the only forward that LaRose struggled with was Brandon Sutter. The latter probably suggests that LaRose has defensive issues.

So how did LaRose have only 32 points despite being able to create scoring chances with other players in the top-six? That provides a nice transition into the next section…

One thing that’s noticeable over LaRose’s entire career is that he has never been that great of a finisher or playmaker. His shooting percentage of 9.5% was his highest in three years and the team shot at only 6.5% at even strength when he was on the ice. Usually, when a player has a poor on-ice shooting percentage, bad luck is attributed to their problems but if you look at LaRose’s career numbers, you’ll see that this has been going for three of the last five years. LaRose can’t control how accurately his linemates shoot the puck, but LaRose’s career average shooting percentage is only 8.4%. Given his skillset, it is fair to say that LaRose isn’t that good of a finisher and that is why a lot of his chances don’t turn into goals. He would certainly be a legitimate top-six option if he had more of a scoring touch because he does a lot of other things right.

The area where LaRose did get unlucky was with the amount of goals he was on ice for. His -15 was the third worst on the team and he was on ice for 47 goals against during five-on-five play alone. He was also on ice for more than 3 goals against at even strength compared to only 2.15 Carolina goals. LaRose’s scoring chance numbers on the Sutter line show that he has defensive issues but the Carolina goalies stopping only 90.5% of the five-on-five shots they faced wasn’t his fault. With that being said, LaRose has shown a habit of getting caught in no-man’s land in the defensive zone and it would lead to the opposing team scoring, so he was definitely to blame for some of the goals against he was on ice for.

However, one of LaRose’s problems was preventing shots against both at even strength and on special teams. He was on ice for 29.4 shots against per 60 minutes at even strength, which is above the league average. He created enough shots to be a positive player in terms of possession at even strength but the penalty kill was a completely different story. LaRose wasn’t one of the team’s primary penalty killers and the reason for it was that he wasn’t very good. He was on ice for 50.3 shots against per 60 minutes on the PK and 12.1 scoring chances for every two minutes. The Hurricanes had a very poor PK in general this season and the weakness of their second unit was one of the primary reasons for that. LaRose and Tlusty bled shots and chances against whenever they were forced to play shorthanded. Although, one of the reasons LaRose wasn’t used much on the PK was because he was sent to the box regularly.LaRose was tied with Jussi Jokinen for the team forward lead in even strength penalties taken per 60 minutes.

LaRose was signed to a two-year deal worth $3.4 mil. last off-season. He was being paid $1.4 mil. this season and will make $1.9 next season. That is pretty standard value for a third liner and might be even better value for someone who was used in a multitude of roles like LaRose was this season. $1.4 mil for a guy who scored 19 goals is a pretty good deal, in my opinion.

LaRose had his best season in the NHL and was able to be a contributor no matter who he was paired with. He doesn’t have the ideal skill set to play on the first line but he does his best to help out that line by at least getting the puck into the offensive zone and making sure that it stays there. The Canes need more players like that but they also need more scorers and LaRose did all he could to help out there. He ended up having his most productive offensive season but he still isn’t a player who would be in the top-six on most teams. His skills are perfect for that of a checking line and my guess is that is where the Hurricanes want him next season. The nice thing about LaRose is that the Hurricanes have a lot of options on what they can do with him because of his versatility.

How do you feel LaRose performed this season? If he blew away your expectations, give him an A. If he met them and didn’t wow you, give him a C. If he completely let you down, give him an F. Explain your vote and tell us how you felt about LaRose’s performance this year. Do you like having his versatility on the team or do you think that his defensive issues do more harm than most think? What role would you like to see LaRose play next season? Tell us about it in the discussion.