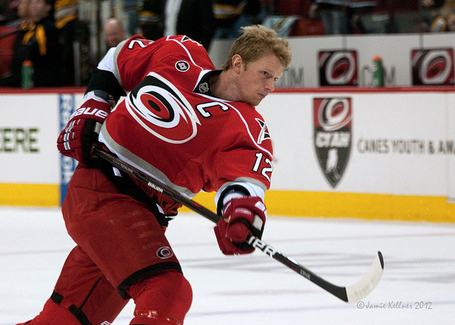 Every team has one player who they hold to a higher standard than others and on the Hurricanes, that player is team captain Eric Staal. He makes more money than the rest of the team and has been the Canes best player for the last few years, so it makes sense for him to be put on a higher pedestal than his teammates. Staal has lived up to these expectations for most of his career but a lot of fans feel that this year was a disappointment for Staal. The reason for this mostly relates to his horrific start to the year where he had only 5 goals and 12 points in 31 games and a -18.

The start Staal had to the year is bad for just about any player, but much worse for someone of Staal’s talent and caliber. Not many people knew what was going on with him during that time and it led to some media members coming up with possible explanations for Staal’s cold start. Some said that he felt remorse for concussing his brother Marc last year, other said he had no confidence because of how poor the team was playing while others said that he was just seeing some horrible luck. The latter explanation ended up being the most plausible one as a lot of the things going wrong for Staal in November were out of his control, the biggest factor being his shooting percentage.

In hockey, the general idea is that if a player can continue to drive possession and get shots on net, then good things will come his way. That happened to Staal around December when Staal began to quietly rack up points on a regular basis. Staal was a point-per-game player for the last five months of the season (58 points in 56 games) and finished the year with another 70 point season. The success of a team usually depends on the performance of their top players, so it’s no surprise to know that the Hurricanes had their worst stretch of the season during Staal’s cold start and began to win more games when he started scoring more.

Staal finished the year with his lowest goal total since his rookie season (24), but still led the team in goals, assists and points. He was also the team’s main offensive catalyst this year, so was this a "down year" for Staal or a good year that began with a rough patch? We will examine that and more after the jump.

Generally speaking, Staal had what would be considered a very good season. He led the Hurricanes in just about every offensive category and recorded at least 70 points for the seventh consecutive season. That isn’t an easy feat to accomplish at all. He may have started off the year cold, but he rebounded in a strong way during the second half of the season. As it was mentioned earlier, he was a point-per-game player in the last five months and was creating scoring chances at near-dominant levels during some stretches of the year. It’s interesting to think about how many points Staal could have had this year if he didn’t have the bad start but the bounces don’t always go your way.

Also, with how much talk there was about Staal having a "bad season" for his standards, he actually scored at a higher rate at even strength than he did last year. Most of those points were coming from primary assists, but I wouldn’t say that is necessarily a bad thing. It shows that his playmaking skills haven’t gone by the wayside even though his goal-scoring fell off a bit this year. Staal also had the second highest even strength scoring rate among Hurricanes forwards this season, trailing only Jeff Skinner, and was on ice for the highest amount of Carolina even strength goals with 57.

Staal’s was also one of Carolina’s best players on the powerplay. He led the team with seven goals and 23 points with the man advantage, was on ice for 29 powerplay goals, was on ice for the third highest amount of shots created per 60 minutes and led the team in scoring chances created with the man advantage. Over his career, Staal has always done a lot of his damage on the powerplay and that statement reigned true this season. He also tallied three shorthanded goals this season and improved his ability to prevent shots against on the PK, an area which he had a lot of trouble with in the past.

A couple areas of Staal’s game that are somewhat underrated are his ability to drive possession and draw penalties. Staal had the second highest Corsi Relative rating among forwards, bested only by Jeff Skinner. Carolina was a poor team at creating scoring chances on a consistent basis this year and Staal was one of the few players who was able to keep his head above water territorially. This asset is overlooked in a lot of players but it’s especially true for Staal when you judge him only by his goal and point totals from this season. Staal also drew at least one penalty per 60 minutes, giving the Hurricanes more opportunities to utilize the powerplay. While the Canes struggled with the powerplay overall, players who can draw penalties like Staal, Skinner and Ruutu are valuable assets to have. Staal also improved his faceoff percentage to 52.5% this season, which is a remarkable step forward compared to his career numbers.

If you want to talk about the negative aspects of Staal’s 2011-12 campaign, look no further than his terrible start to the year. At the end of November, Staal had only 12 points and was on pace to have his worst scoring line since his rookie season. He did finish the year with 70 points but had only 24 goals which was the first time he didn’t score at least 25 since 2003-04. The main stat that was pointed to often was his -20 plus/minus rating, which looks ugly but this is a stat that shouldn’t carry much value because it is largely dependent on luck, something Staal had absolutely none of during the first two months of a season.

A player’s plus/minus rating is determined by how many even strength goals for and against they are on ice for, which is something that luck plays a big role in. Remember, Staal wasn’t scoring much at the start of the year but if you were to take a look at his underlying numbers from the first 41 games of the season, they actually aren’t that bad. He was above 50% in corsi at even strength, showing that he was creating offense and driving the play forward, but the team was shooting at only 6.3% when he was on the ice. His personal shooting percentage was only 6.5% and to make things worse, the Carolina goalies were stopping only 88.8% of the even strength shots they saw when Staal was on the ice. You can see that both stats turned around in the second half of the season, neither of which Staal has much control over.

The bad thing about plus/minus is that it gives a negative rating to a player if he is on-ice for a goal even if he didn’t have a defensive miscue on that play. By giving that player a negative rating, you are assuming that he contributed to a goal being scored against his team, which isn’t always true. Sometimes a forward or defenseman is responsible for a goal against but there are a lot of times when the goaltenders just can’t stop anything whenever they are on the ice. That was the case with Staal for the first half of the season. Look at it this way, if Staal was responsible for all 74 of the even strength goals against he was on ice for, then he probably shouldn’t be in the NHL and we all know that isn’t true.

Debates about plus/minus aside, Staal had a lot of defensive issues this year. He was still on ice for the highest amount of goals against on the team and the third highest amount of shots against at even strength among forwards. Staal also led forwards in giveaways with 47, which is probably because he has the puck a lot but it’s still an ugly stat, regardless. He is able to stay a positive player in most shot metrics because of the amount of offense he produces, but he still gives up a lot at the other end, too. That is a bit worrisome because he’s trusted with some key defensive minutes both at even strength and on the PK.

Speaking of which, Staal was better at killing penalties this season but he was still on-ice for a lot of shots against on the PK compared to his teammates. He was better at suppressing shots against than he was in previous seasons, but when you look at his career numbers, there really isn’t anywhere to go but up compared to those. With that being said, Staal improving his penalty killing abilities shows promise for the future in terms of him becoming a stronger all-around player.

Staal is the highest paid player on the Hurricanes as he made $7,750,000 this season and has a cap hit of $8,250,000. In a general sense, Staal was overpaid this year because a player making that much money per year indicates that they are elite and Staal didn’t produce at that level this year. His contract gets increasingly more expensive as the years go by, so there’s a good chance that Staal will continued to be overpaid unless he has another 100-point season. I think players like Staal need to be separated from their contracts when they are judged because the Hurricanes are a better team with him in the lineup and replacing him would take years. Yes, he’s overpaid but the Hurricanes are glad to have him and wouldn't trade him unless it was for something of equal value.

All in all, Staal turned in a very solid year and remains the Hurricanes best player for now. His goal scoring was down but there were a lot of other areas where Staal improved that are helping him develop into a better overall player. The Hurricanes are probably going to hope for more offensive production from him next year and if you believe in the law of averages and regression to the mean, that should happen.

What are your feelings on how Staal played this season? Give him an A if he exceeded your expectations, give him a C if he met them or give him an F if he completely let you down. Explain your vote and discuss your feelings on Staal's season in the comments. Were you disappointed with his low goal total? Do you think his defensive game or high price tag is an issue? Do you see him improving next season?