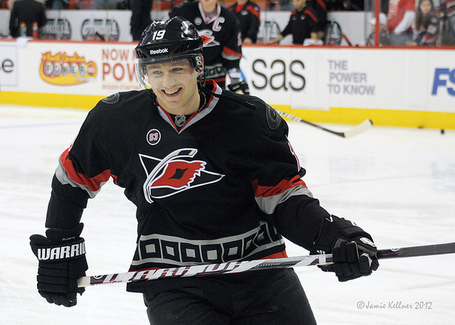 If there is one thing that Hurricanes General Manager Jim Rutherford has been great at over the years, it is finding use in spare parts from other teams. Over the years, we’ve seen him acquire players who other teams seemingly gave up on for low costs and most of those players have been very effective on the Hurricanes. We’ve seen him do this with players like Jussi Jokinen, Bryan Allen, Sergei Samsonov and Jiri Tlusty. The latter being one of Carolina’s bright spots this year and a very pleasant surprise.

After being acquired from the Toronto Maple Leafs in late-2009 in exchange for Philippe Paradis, Tlusty spent most of his time in Carolina in a checking role on the third and fourth lines. When he was placed on the second line on this year’s opening night roster, it probably came as a surprise to a lot of fans because he was never known for being much of a scorer in the NHL. Despite being very good offensively at other levels, Tlusty had only 17 goals and 38 points in 148 total NHL games.

The coaching staff must have saw something in Tlusty that others didn’t because he was able to double his career goal total this year and almost do the same with his point total. Tlusty soon became a regular in the top-six and was even promoted to the first line with Eric Staal for most of the second half of the season. All of this earned him a two-year contract extension at the end of the year, one that he deserved but there are still questions surrounding Tlusty and the probability of him improving on this season.

Tlusty is still very young and could be growing as a player but there is also the concern of this year being a fluke. While both are possible, one thing that is certain is the Hurricanes got a lot more than they expected out of Tlusty this year and they were very pleased with it. After the jump, we are going to take a closer look at the year that was for Tlusty and see what he can do to build on his career season.

If you watch some game tape from Tlusty over the last couple of seasons, you should notice some considerable improvements in his performance this year. He looked stronger and a lot more poised than he ever had before and it made him a good candidate to be used on Staal’s line. Tlusty made the most of his time on the first line as we got to see him make some fantastic individual efforts like this and have the best season of his young NHL career. The Canes desperately needed another finisher in their top-six and Tlusty helped fill that void with his 17 goals. He wasn’t the ideal top-line winger or a replacement for Erik Cole, but it’s hard to frown upon his contributions this season.

An impressive fact about Tlusty’s season is that he managed to have a career year despite seeing very little time on the powerplay. All but two of Tlusty’s goals came at even strength, making him tied for second on the Hurricanes behind Jeff Skinner. Powerplay production is something that usually boosts a lot of player’s point totals, but Tlusty didn’t have that luxury and still had a career season despite that. He actually spent more time on the PK than he did on the powerplay. He was also one of the team’s better shot blocking forwards and had more shots on goal this year than he ever had before.

If anything, this season showed us that Tlusty can be more than a fringe player in the NHL but there are some things that he does need to work on.

As I mentioned earlier, Tlusty helped the Canes in a big way by giving Eric Staal somewhat of a consistent linemate who he was able to form chemistry with. The two were able to form a decent scoring line that could drive possession at a solid rate and create scoring chances. Tlusty’s numbers away from Staal, however, are not as promising. 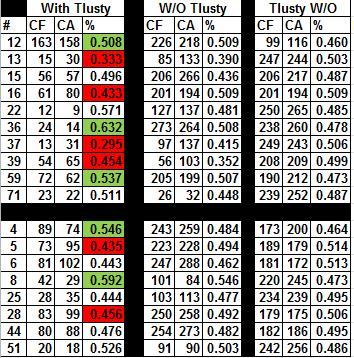 This is Tlusty’s "With or Without You" scoring chance report from the past season and one thing that should stick out is how poor Tlusty was away from Eric Staal. When the two were on ice together, the scoring chances were going in the Hurricanes’ favor at even strength. When Tlusty wasn’t playing with Staal, he wasn’t able to control scoring chances and spent too much time in his own zone. It makes you wonder how Tlusty will fare next season if he isn’t playing on a line with Staal. He has a very good chance of entering next season as the first line winger, but that could easily change if another player or two is brought in. If that happens then where does Tlusty fit in the lineup and how will he perform?

The other major concern surrounding Tlusty is that while his play this year looked great by the eye test, his underlying numbers tell a completely different story. Tlusty had the fourth worst Corsi Relative rating among forwards showing that driving the play wasn’t one of his strong suits and it’s largely because he was on ice for over 30 shots for every 60 minutes he played at even strength. Some say that all of those years on the checking line improved his defensive game, but his shot data disproves that theory. Tlusty’s shooting percentage was also at a career high of 12.4%, which is prone to come crashing down even if he can get shots off at a high rate.

Tlusty was making $525,000 this season and he gave the Hurricanes the most value for their dollar according to Goals Versus Salary. Anytime you can get 17 goals from a guy making near the league minimum, it is a huge bargain and something that a team on a budget thrives on. He was recently re-signed to a two-year deal that will pay him $1.5 mil. next season and $1.7 mil. the year after.

To sum things up in a few words, Tlusty took a huge step forward this year but there are some major red flags surrounding him. Most of them relate to his ability to drive possession and how he might perform when he isn’t playing on the first line. His poor possession numbers could relate to him playing tougher minutes than he ever has before but that comes with the territory when you are on Staal’s line so he’s going to have to get used to it if he wants to stay in the top-six. Look at things this way, Tlusty has been improving every year, so hopefully the next area he works on is his all-around game and his ability to drive the play forward. That could lead to even better things for him in future years.

How do you feel about Tlusty’s performance with the Hurricanes this season? If he exceeded your expectations, give him an A. If he met them, give him a C. If he completely let you down, give him an F. Explain your vote and discuss your thoughts on the season that was for Tlusty. Do you think he can repeat this season or possibly improve on it? Do you think that he needs to be with Staal to succeed or do you think he can work on other lines? What role do you see Tlusty playing next season?