How good is Jordan Staal?

Share All sharing options for: How good is Jordan Staal?

When the Hurricanes were rumored to be one of the teams interested in trading for Jordan Staal, everyone knew that they were going to have to give up a big package and they did just that at the NHL Draft last night. The #8 pick, Brandon Sutter and Brian Dumoulin became property of the Pittsburgh Penguins in exchange for Staal and the general consensus seems to be that the Canes overpaid to acquire him. While there is no denying that the Hurricanes gave up a lot in this trade, they also acquired one of the best young centers in the league and will likely strongly benefit from this trade.

Yes, it was hard to give up the #8 pick, especially with Filip Forsberg and Mikhail Grigorenko still on the board and it was even more difficult to watch Sutter & Dumoulin go, but players like Jordan Staal do not grow on trees. Despite the contract issues with the Penguins, any team that was going after Staal was going to need to give up a lot because he is a special talent that hasn't even reached his best years. Staal has accomplished a lot so early in his career and is likely going to improve even more in the coming seasons. If you have a chance at acquiring a talent like that, you take that risk.

Staal's stat line and reputation as "Pittsburgh's third line center" might not indicate this, but there are a lot of things to like about Staal's game and the Hurricanes may not regret this trade when all is said and done. We will look at the reasons why after the jump.

Before we go into Staal's numbers, let's talk about one of the pieces that the Hurricanes gave up, that being Brandon Sutter. Speaking as a fan, Sutter is one of my favorite players. I have talked about how tough of a role he plays and how valuable it makes him to the Hurricanes, but Sutter was one of the players that had to go the other way no matter what. Why? Because he plays a very similar role to Staal and the Penguins needed an immediate replacement for him.

One of the newest developments in hockey analytics are Rob Vollman's Player Usage Charts, which illustrate how teams deployed their players in a given year. It plots each player's offensive zone start percentage against their corsi relative to quality of competition to see what kind of situations they were used in. The graph also judges each player's performance in these situations by looking at their Corsi Relative rating, which shows how well they were controlling possession at even strength. A blue bubble means they had a positive Corsi Relative while a white bubble means they had a negative rating. When you compare the Hurricanes' chart to the Penguins', you can see that both Sutter and Staal were utilized in similar situations last season. 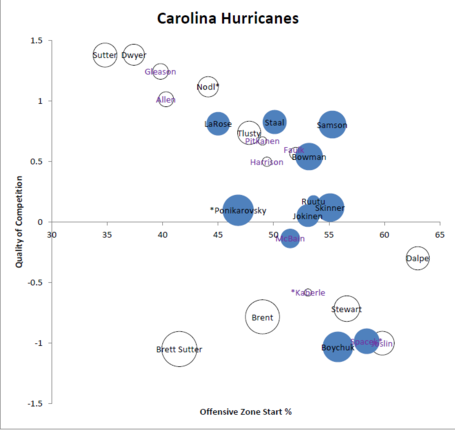 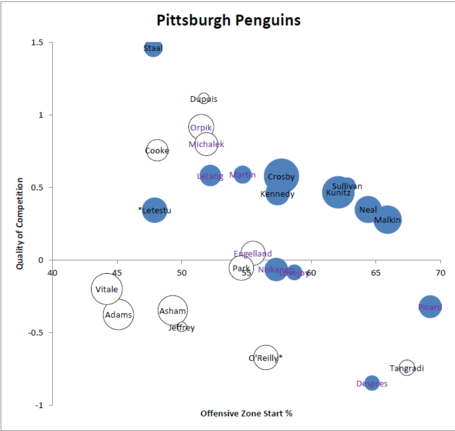 Both Sutter and Staal saw the toughest matchups on their respective teams with Staal managing to be a positive player territorially while Sutter was not. Albeit, Sutter started more of his shifts in the defensive zone because the Hurricanes were a much weaker team at even strength play than the Penguins. Staal also got to play with stronger teammates than Sutter, so the playing field isn't completely even here but there is little doubt that Staal possesses a stronger two-way game than Sutter does right now.

The most impressive facet about Staal is that not only has he been beating out tough assignments for most of his career, he has been able to score at a very high rate while doing so.

Staal has scored at what would be considered a "top-six rate" at even strength in all but one season (which was when he was only 19) and has been able to do this while playing some very tough minutes. Another thing you'll notice is that the Pens were creating way more shots on goal than they were giving up at even strength last year when Staal was on the ice, which speaks a lot about his two-way play and how good of a team the Pens were last season. I doubt his possession metrics will be that good with the Hurricanes, but he should be able to to help out Carolina in that area of the game regardless.

Sutter was a fantastic defensive forward for Carolina and a terrific checking center but he has yet to produce top-six like numbers for Carolina. Staal is only a year older and has been producing at a top-six rate for most of his career and possesses a much stronger two-way game than Sutter, which is why the two were dealt for each other. The Hurricanes really needed a forward who can drive play and produce points and Staal gives them that. Sutter, on the other hand, does not need to be a point-producer in Pittsburgh since he is playing behind Sidney Crosby and Evgeni Malkin. All he needs to do is be the solid defensive center that he was for the Hurricanes and the Penguins will be satisfied.

At the end of the day, Carolina got the best player in the deal as Staal is a legitimate NHL-talent who is very close to entering his best years. He's likely going to play more minutes in Carolina with possibly better teammates and that could lead to more points from him depending on how things go. It's been said that he has a lot of untapped offensive potential and his point production is on cue with that.

Adding Staal also gives the Canes more options as to what they can do with their first two lines as both Eric and Jordan can succeed without the benefit of protection and Muller can do almost anything he wants with them. The Hurricanes are now a very strong team down the middle and it should be exciting to see what Rutherford does to build around his new core. It's going to be tough to replace Sutter, but that won't be nearly as difficult as finding another player like Staal out there.