The Carolina Hurricanes kicked off their annual summer conditioning camp on Tuesday, June 26. The camp gives Hurricanes staff an opportunity to meet and evaluate new prospects. It also offers the prospects NHL level conditioning programs along with tips for diet, media relations, motivation and other programs to orient them to life in professional hockey. The camp includes four on-ice skate practices at Raleigh Center Ice that are open to the public, the first of which was held Wednesday afternoon (continuing Thursday through Saturday from 4:30 - 5:30 pm). I was fortunate to attend and have a few notes and shots of the on-ice action. Also, the head coach stops by and weighs in on the latest trade acquisition.

After practice, Kirk Muller, Cory Stillman, and Jeremy Welsh spoke to the media in attendance. Muller commented on Welsh's performance at camp, and also weighed in with his initial reactions to the Jordan Staal trade (and speculated where he may be placed in the line-up).

Chip Alexander @ice_chip: Welsh's one game, contract oddity led to cap hit of $17.9 million. He aid he was in a financial analysis class at Union when told. Fitting.

Welsh said a buddy in class called up capgeek.com "We started laughing. Just a statistical anomaly. It was pretty funny to see."

Collin Olson @C_Olson29 In North Carolina for 5 minutes and I'm already sweating. It's going to be a #2shirtday

"@haofwill: @C_Olson29 favorite thing about NC so far?" Tough question. What isn't there to like?

And finally, a few photos from Wednesday's practice. Here's a link to the full album: 2012 Hurricanes Conditioning Camp 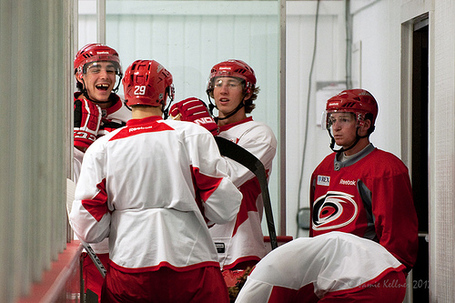 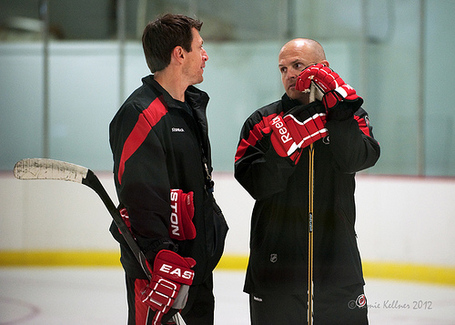 Jeremy Welsh - big, mobile forward (with 4-5 years on most of the other prospects). Muller says he already looks stronger this off-season. Will he make the 2012-13 roster as third line center? 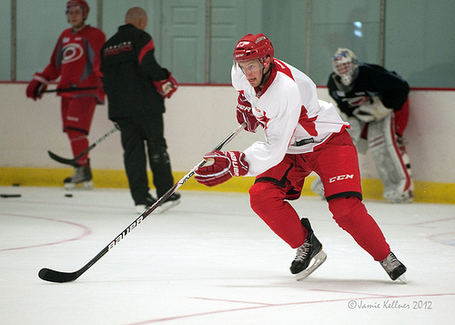 Phil Di Guiseppe - Highest Canes pick in the 2012 entry draft. He skated a few drills on a line with Welsh. 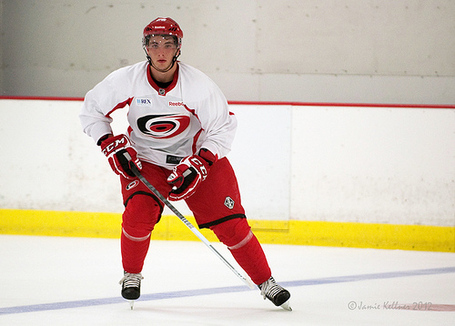 Erik Karlsson - Michael Smith tweeted that Erik Karlsson's on-ice style reminds him of Zac Dalpe, and I agree. Karlsson has signed with Frolunda of the Swedish Elite League and will play next season in Europe. 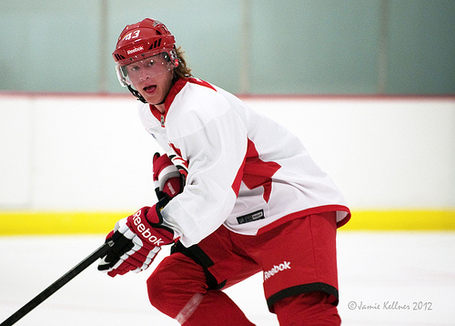 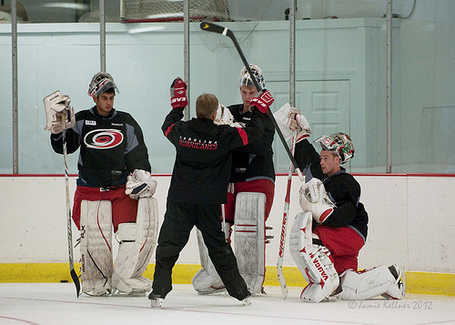