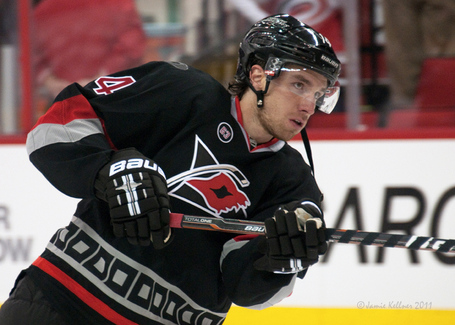 The waiver wire always has a few surprises each year. Sometimes a player who is completely useless will end up there and other times, someone who could provide a big help to your team can be found on waivers for no cost. In the case of Andreas Nodl, he helped out the Hurricanes a lot more than one would think, but his production was in line with what most would expect from a waiver claim.

Nodl was initially put on waivers in late November by the Philadelphia Flyers to "gauge interest" and the Hurricanes took this opportunity to claim him. He was primarily used with the Flyers as a defensive third liner but was given time with more high-end players such as Mike Richards, as well. was in need of stronger defensive forwards, so he filled a team need at the time but it took awhile for him to fit into the system.

During his first month here, Nodl was mainly used on the fourth line and didn’t make much of an impact, but an injury to Patrick Dwyer made head coach Kirk Muller use him in a bigger role. It didn’t take long to see that Nodl’s defensive strengths made him a great fit for the third line with Brandon Sutter and that is where he found himself for the rest of the season.

After the jump, we will review Nodl’s performance with the Hurricanes this season and discuss what he could bring to the team next season.

Nodl is a very sound defensive player and once he was added to the third line, it became a very good shutdown unit. The Hurricanes surrendered only five even strength goals when Sutter and Nodl were on ice together. He had similar success when he played with Patrick Dwyer as those two were on ice for only four goals against. Remember, since he was playing with Sutter & Dwyer, it means that he was being used regularly against opposing team’s top-lines and regularly starting most of his shifts in the defensive zone. Being on ice for such a low amount of goals against while playing in those situations is not an easy task.

Another promising thing is that Nodl’s shot-based metrics (Corsi/Fenwick) didn’t drop off too much when he was playing away from Dwyer and Sutter. It shows that he wasn’t completely reliant on those two to be successful. This is a good thing because when it came to playing defense, Nodl did a fine job. He was on ice for the fewest amount of even strength shots against at even strength relative to his ice time. Nodl was also very good at preventing scoring chances against, and was one of the team's better forwards in that category.

Nodl’s role on the team is actually very similar to Dwyer’s in the sense that his primary job is to defend and do his best to halt opposing top lines. He plays a responsible type of game and rarely gets himself out of position, so he is perfect for this kind of role.

The other area where Nodl is similar to Dwyer is that his offensive production was almost non-existent. He had only three goals and eight points in 60 total games (48 of which were with ) and his scoring rate at even strength was among the lowest on the club. One could blame his low point production on poor shooting luck but Nodl didn’t exactly get the puck to the net that much either (60 shots in 48 games with ). He also wasn’t very strong when it came to driving the play forward, which is partially due to the situations he plays in but his lack of offensive production was another factor.

In regards to Nodl having poor shooting luck, something interesting to look at is that he ended up the year as a -5 despite being on ice for only five goals against when he was on his main line. This is because he was on ice for only four goals at even strength with Sutter & Dwyer and eight total on the season. He was also on-ice for seven goals against while playing with Eric Staal, despite playing with him for less than 60 minutes and not getting hammered shot-wise. You could possibly attribute this to Sutter being a much more defensively responsible player than Staal but being on ice for that many goals against despite not playing much does make you wonder if those two had some bad luck in their own end.

Preventing scoring chances wasn’t much of a problem for Nodl. In fact, he was one of the best forwards on the team in that department. Creating scoring chances, on the other hand, was something that he had a difficult time doing. Only Anthony Stewart, Tim Brent, Brett Sutter and Riley Nash were on ice for fewer scoring chances relative to their ice time. Due to this, the Canes owned only 44.1% of the even strength chances when he was on the ice. Nodl isn’t exactly a great puck handler and he has a pretty weak set of hands, he has never been expected to do much offensively. He continued to play top-nine minutes despite that and certainly did his job at one of end of the rink.

Nodl was a waiver claim, so the Hurricanes paid for half of what is left of his $845,000 salary from this season. He is set to make the same amount next season, as well. Players who are making under $1 mil. generally aren’t expected to do a lot, so how much value Nodl gave the team isn’t much of an issue here. Better players might be available for $845k but I wouldn’t say that the Hurricanes were overpaying for what they got with Nodl. His current price tag sounds about right, actually.

When he was claimed off waivers, Nodl was known for being a defensive third liner and that’s exactly what he was with the Hurricanes. His job was to deny scoring opportunities against, work hard and not make mistakes, which is what he did for the most part. Although, one could say that a player getting top-nine minutes should be able to produce more than 7 points in 48 games. Nodl’s offensive upside is probably better than what he showed in this year but it still doesn’t appear to be that high.

Still, it is hard to say that Nodl didn’t fill a void because the Canes needed more defensively responsible forwards at the time he was claimed. Nodl lived up to one reputation but something that made my head scratch was that he was rarely used on the penalty kill this season. Is this the coaching staff’s problem or has Nodl not shown himself capable enough to play there? It definitely makes you wonder. Assuming that no one else is brought in this off-season, I think Nodl will become a regular there.

What grade would you give Nodl’s performance with the Hurricanes this season? If he exceeded your expectations, give him an A. If he met your expectations, give him a C. If he completely let you down, give him an F. Explain your vote and discuss your opinions on Nodl. Were you expecting him to be mainly a defensive forward or were you expecting more offensive production out of him? Do you see him in the team’s future plans or do you think a better player can be acquired for the same price? Would you like him to be used on the penalty kill more next season? Discuss in the comments.