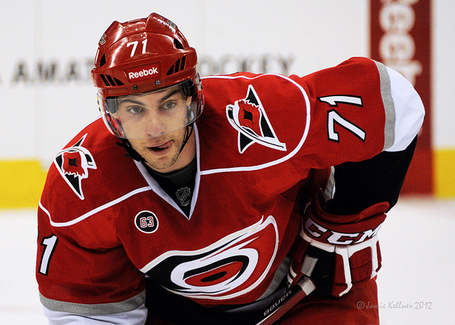 via Photo by Jamie Kellner

The Hurricanes announced yesterday that they have re-signed Jerome Samson to a one-year, two-way deal that will pay him $600,000 in the NHL and $105,000 in the AHL with $175,000 of that money being guaranteed. Samson is more known for his contributions with the Charlotte Checkers as he has been one of the team's top offensive threats and a 20-goal scorer in the AHL for the last five years. He is also going to turn 25 in September and has scored only twice in 46 games played at the NHL level, so he doesn't have the most impressive NHL resume going by boxcar stats.

It is very likely that Samson spends next season in the AHL but he does have a decent amount of potential and could impress the coaching staff enough to get an extended look with the big club. Samson is old enough that he needs to pass through waivers before going to the AHL so the Hurricanes are going to have to take that chance if he doesn't make the team out of camp. This may not sound like a big loss because Samson hasn't done much in the NHL, but the Checkers would be losing an important player and Samson has some untapped potential that may not get talked about that much.

Judging Samson's potential is kind of difficult because he's older than most "prospects" and hasn't done much outside of the lower rankings but one thing we do know about him is that he's a proven scorer at the AHL. Not only that, but he does a lot of other things for the Checkers that might go unnoticed and could possibly help the Hurricanes in the near future.

Projecting the performance of players in different leagues is something that's been a work in progress for the stat community and one of the most popular methods is to look at the "translation factors" of different leagues. This method was drawn up by Gabe Desjardins of Behind The Net Hockey and what it does is look at the point-per-game totals of every player in their last year in a certain league and what percentage of that total they maintained the next year at a higher level. The NHL is the top league in the world, so it's more difficult to score than in other leagues and a player is expected to keep a certain percentage of his scoring when he makes the transition to another league. If you look at the table on Desjardins' site, you will see that players going from the AHL to the NHL are expected to keep 44% of their scoring, so a player who has 50 points in 50 games in the NHL would be expected to have 36 points in a full NHL season. These are not always true but they do give you an idea of what to expect from certain call-ups and younger players.

One main issue with this system, however, is that goals and points often come as a result of luck and tend to bounce around over a player's career. Let's say that a player has a crazy year where he shoots at over 20% (cough Sergeikostitsyn cough) or plays on a line that scores a lot and racks up assists that way. This is something that isn't guaranteed to sustain, so goals and points can be misleading. Stephan Cooper of Habs Eyes on the Prize noticed this and developed a different translation method for projecting AHL performance. It is similar to Desjardins' only he decided to use shots instead of points.

There is a limited amount of information available for the AHL, so we can't do the same type of analysis for that league as we do in the AHL but one thing we do know is that players who can at least get a good amount of shots on net are more likely to score than those who do not. A player also has more control over getting shots on goal than he does at converting these chances, so using shots instead of points is an interesting way to project future performance. Cooper estimated that a player going from the AHL to the NHL is expected to keep about 56% of his shot rate when making the transition. How do the players on the Checkers look by using this analysis? See for yourself.

This is the scoring line for every player on the Checkers, their shooting percentage and the shot rate that is expected from them at the NHL level. You can see here that Samson looks very good by this projection. He was able to get almost four shots on goal per game when he was playing with the Checkers, which is was a main reason why he was able to have 20 goals despite not having that high of a shooting percentage. It shows that Samson was not only one of the Checkers best scorers, he was one of their top possession players, as well. I, personally, tend to favor players like this so I am higher on Samson than others might be.

One might be skeptical of Samson's future in the NHL because he has spent the majority of the last five years in the AHL and only scored his first NHL goal in this most recent seasons. This is a legitimate concern, but a counter-argument to that could be that he hasn't been given much of a chance in the NHL. He has played only 46 games over three seasons with the Hurricanes and wasn't given much ice-time during those years, either. Last year was the first time that he received decent ice-time and got to play with quality linemates and he ended up making a decent impact. Another thing worth mentioning is that Samson was able to drive the play forward a decent amount in all three seasons, but this is a very small sample size so take that with a grain of salt.

The overall point remains, though. Samson has all the makings of being a quality NHL player even if he is a late-bloomer and hasn't quite made his mark yet. There are players who had their first full-season in the NHL at somewhat of an older age compared to their peers so Samson could still have a future in the NHL even if it isn't with the Hurricanes. The Hurricanes have a surplus of third-liners, so the only way Samson is going to make the team next year is if he has a very impressive training camp and pre-season, and I mean good enough to be used in the top-six. This probably means that Samson has a small chance of being on the Hurricanes full-time next season unless a major injury occurs. His window of opportunity in the NHL, however, is still open.