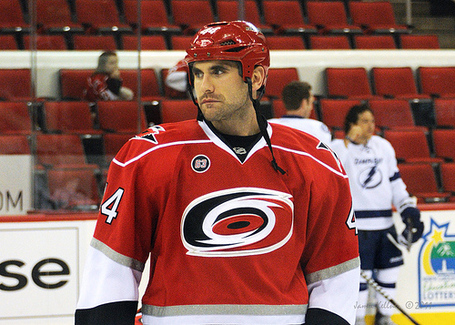 via Photo by Jamie Kellner

Jay Harrison saw his career turn around once he signed with the Carolina Hurricanes and he will now be with the organization through the 2015-16 season as the team has signed him to a three-year contract extension. The contract is worth $4.5 mil. and will pay Harrison $1.5 mil. per season.

Last year was a milestone season for Harrison as he set career highs in goals (9), points (23), penalty minutes and minutes played. There were quite a few people who wondered if he would make the opening night roster at the beginning of last season and he ended up becoming one of the team's top-four defensemen by the end of the year. Harrison contributed on both the powerplay and penalty kill and proved to be a solid partner for rookie Justin Faulk as his sound defensive game complimented Faulk very well. Harrison's hard work earned him to be Carolina's nominee Bill Masterson Memorial Trophy for displaying qualities of perseverance, sportsmanship and dedication to the game.

Harrison was making only $650,000 last season and gave the Hurricanes a great amount of value for that contract when you look at his contributions. His new contract should be fair value for him over the next few years and possibly more depending on how he develops and how the coaching staff uses him. If he stays in the top-four, then it's a great deal for the Hurricanes and if he becomes a quality third-pairing defensemen, then $1.5 mil. is about the right price for him.

Overall, this looks like a solid deal for Carolina with not much risk attached to it unless Harrison's play takes a sharp decline over the next four years. We will update the story later when further details are released.