Losing the special teams battle is always costly and that happened to Carolina in the worst way this Saturday.

The season opener for the Carolina Hurricanes on Saturday night didn't go as well as they hoped it would, as the Canes ended up taking a 5-1 loss to the Florida Panthers. Carolina didn't play what most would consider a "good game" but I think most would agree that they had their chances to make things somewhat closer but those plans were thwarted by Florida goaltender Jose Theodore. Carolina outshot Florida 33-16 at even strength and outchanced them 18-12, so they definitely had an advantage in that part of the game but things slipped away from them early after falling behind 4-0 in the first period. Goaltending played a difference but special teams is where things really went wrong for Carolina.

The Hurricanes took three bad minor penalties in the first period and Florida ended up making them pay for all of them with three goals. Carolina's penalty kill yielded seven scoring chances while playing roughly five minutes on the PK. Compare that to the three scoring chances they created in ten minutes of powerplay time and you have a recipe for disaster.

Both special teams units were bad, but the penalty kill allowing three early goals is what caused the game to become out of reach for Carolina in the early stages. The problem for Carolina relates to their play in both the defensive and neutral zones as they allowed the Panthers to get the puck in deep too easily and they struggled to clear the puck, as well. A few stats that I'll be tracking for the Hurricanes this year are zone entries and exits at even strength but I decided to extend it to special teams play for this game since that was the primary focus. For starters, we're going to look at how successful the Hurricanes were at clearing the puck on the PK.

The table above shows how often the Hurricanes had a chance to clear the puck, whether or not they got it out and if they turned it over. You can see that they didn't get many opportunities to get the puck out of the zone, as they had only eight clearing attempts and they managed to get half of them out. The other four were either kept in at the line by Florida or turned over and each of the turnovers turned into goals. Granted, two of them happened on one play (Jiri Tlusty trying to re-direct a pass by Eric Staal) but that's still pretty bad regardless. The fact that Carolina's penalty kill couldn't keep the puck away from Florida is very concerning, but let's hope that it was just a bad first game and not a sign of things to come.

Neutral zone play was also an issue, even though Florida didn't need to enter the zone that often because of how much Carolina struggled to clear the puck. However, when the Panthers needed to get it deep, Carolina made the job very easy for them. The general rule of thumb with zone entries is that carrying the puck into the zone has a better chance at leading to a shot on net than simply dumping the puck in and relying on the forecheck and turnovers. A few studies have illustrated this in recent seasons and I'm sure the same principles apply on the powerplay. Needless to say, Florida had no issue with carrying the puck in as they had control of the biscuit on all but one of their zone entries. Compare that with the Hurricanes needing to resort to dumping the puck in on seven of 18 entries and it's easy to see why Carolina lost the special teams battle.

Carolina needs to do a better job of making it tough for opposing teams to enter their zone on the penalty kill and their awareness on the PK could also use a bit of work, as we will see below.

Here is the Panthers fourth goal and their third on the powerplay. 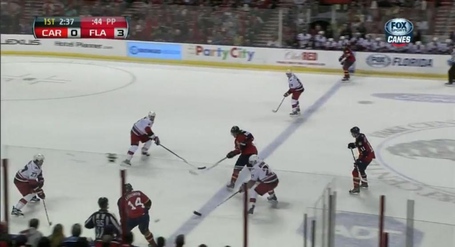 Here you will see Peter Mueller of the Panthers entering the zone by carrying the puck in and sending a pass to Tomas Fleischmann at the bottom of the picture. The Hurricanes appear to be in good shape here as both Justin Faulk and Tim Gleason are covering the two Florida forwards, Drayson Bowman is help containing and Jiri Tlusty is covering Scottie Upshall at the top of the picture, or at least he should be. 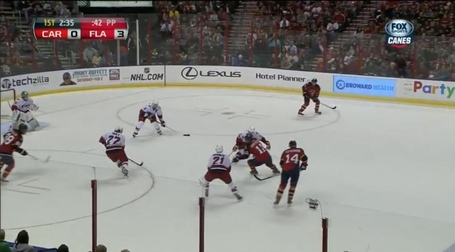 The trailing forward (Jonathan Huberdeau) now has the puck and Tlusty panics a bit by converging on him, leaving Upshall open at the top of the faceoff circle. Perhaps he thinks the defenseman behind him (Gleason) will take care of Upshall before the puck can get to him? The only problem with that strategy is that Gleason is also watching the puck and no one is watching Upshall. We all found out the hard way how skilled of a play-maker Huberdeau is and we're about to see it again. 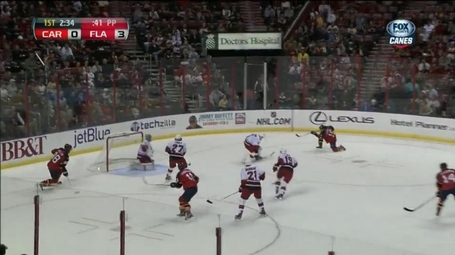 Huberdeau sends a perfect pass over to Upshall, who fires home a one-timer past Cam Ward. Gleason was too late getting over and Upshall was left with a wide open shot from a prime scoring area inside the faceoff circle. You'll always hear announcers talking about how teams get "mesmerized by the puck" at times and this is an example of it right here. Tlusty isn't the most experienced penalty killer on the team and his tendency to panic when he didn't need to cost him.

Carolina had a couple days off before their game against Tampa Bay on Tuesday evening and I'm sure that special teams and plays like the one illustrated above will be the focus for the rest of the coaching staff. There's really nowhere to go but up after a performance like the one on Saturday but the issues appear to be correctable with some experience and hard work in practice.