The Carolina Hurricanes face the Washington Capitals tonight at PNC Arena. Will this be yet another turning point in the Hurricanes season?

If there is one phrase to describe the games this season between the Carolina Hurricanes and the Washington Capitals, it would have to be "turning points." On February 26th, the teams met for the first time, in the nation's capital, and a depleted Hurricanes roster was no match for an energized Capitals squad and the Canes fell victim to a 3-0 shutout.

But that game was a turning point for the Canes as they were able to turn their fortunes around, and from that game they went on a 5-1 run, despite such adversities as the loss of starting goaltender Cam Ward, and the team further extended its winning ways with a 4-0 shutout of the Capitals again in Washington on March 12th. After that win, the Hurricanes established themselves with a strong footing on first place in the Southeast Division and third place in the Eastern Conference, while the Capitals fell to fourth place in the Division, 10 points behind Carolina, and next to last place in the league.

What a difference a game makes.

The Washington Capitals came into Raleigh just two nights later, on the evening of March 14, on a three-game losing streak, and on the virtual brink of elimination from any post-season hopes. Their captain had been called out publicly and mercilessly in the media, and the Hurricanes "smelled blood" and were one knock-out punch away from ending the Capitals hopes for the season. Even Puck Daddy was giving Hurricanes head coach Kirk Muller credit for being "the man who solved Alex Ovechkin." And it certainly looked as though things were going according to plan at the end of the first period with the score 2-0 Hurricanes, with the lead-off goal being scored 74 seconds into the game by none other than the Capitals' much-maligned former teammate Alexander Semin.

But desperate times call for desperate measures, and on that night the Capitals found themselves desperate and played as such, capturing a complacent Hurricanes squad off-guard and scoring three unanswered goals in the final two periods to take a 3-2 regulation win.

It was a turning point of the worst kind. Since that game, the Capitals have gone 6-3-1 in their last 10 games. With 34 points they have tied the Hurricanes and are within reach of a playoff spot. Ovechkin was named the NHL first star for the week ending March 25.

Meanwhile, in the last nine games, the Hurricanes have picked up three out of a possible eighteen points (read that again, three out of eighteen points), as they have gone on a 1-7-1 skid that has them four points out of the division lead and three points under the playoff cut line. In addition to the loss of Cam Ward, backup netminder Dan Ellis has missed time due to injury, and the team has been without its best defenseman, 21-year-old Justin Faulk. As of this morning, the team ranks dead last in the NHL on the power play, and while not dead last, next-to-dead-last at 29th in the NHL on the penalty kill. While the team has games in hand over many of its key rivals, those games in hand only help if the team is able to win them.

Perhaps it's time for another turning point in this season.

The Hurricanes are coming off a hard-fought but ultimately disappointing 4-1 loss against the Montreal Canadiens last night. They arrived back in Raleigh at 1:36 am. Meanwhile, the Capitals are coming off a frustrating 5-4 overtime loss to the Flyers on Sunday, but they have been in Raleigh since Sunday evening, rested and waiting. This will be their last game of a three-game road trip.

Dan Ellis was activated from IR and was back in the line-up for the Canes on Monday night, in a back-up role to Justin Peters. It's been mentioned (but not confirmed) that Ellis will get the start tonight. Bobby Sanguinetti (upper body) skated with the team but was not in the line-up last night, although on the broadcast it was stated that he is ready to play and the team may dress seven defensemen in the back-to-back situation. Otherwise there are no known changes to the line-up from last night's game. Tuomo Ruutu (groin) and Adam Hall (groin) remain day-to-day. Justin Faulk (IR, knee) has been skating with the team and may be ready to play by the end of the week. Cam Ward (knee) remains on IR.

The Hurricanes will not hold a morning skate today.

For the Capitals, Alex Ovechkin is on a scoring tear. He is on an eight-game points streak that includes eight goals and 12 points. On the opposite end of the ice, goaltender Braden Holtby has been stellar in net, posting an 8-4-1 record with two shutout, a 2.29 GAA, and a .925 save percentage in the month of March. Holtby is expected to get the start in Raleigh. He will be backed up by Michal Neuvirth, who has a 4-1-1 record against the Hurricanes.

One other quick statistic: at 24.4% (just a couple of ticks behind the Flyers), the Capitals have the second-best power play in the NHL. Just a thought that it might be wise for the Canes to stay out of the penalty box.

Some reading material as you prepare for tonight's game:

From Raw Charge, our friend Carolyn Christians gives us the highlights (and lowlights) of the Southeast Division - Weekend Update: Clear as Mud (written before last night's loss)

From Hurricanes.com, Tracking the Storm Monthly Report for March

Of course, if all else fails, this might be fun to watch: 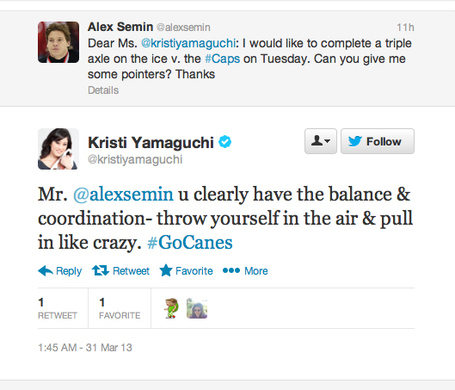 (*** please note, that is not the real Alex Semin, but it is the real Kristi Yamaguchi, context here if you missed it Saturday ***)