Hurricanes Reveal New Uniform Design - What Do You Think?

Share All sharing options for: Hurricanes Reveal New Uniform Design - What Do You Think?

The Carolina Hurricanes held a ceremony today to release their new uniform design and Eric Staal was there to show off the new look. The jersey is much cleaner and the crest is a bit smaller and more flexible. The organization was looking for a more classic look and after a couple of years of tinkering, ended up very happy with the result.

The jersey will not be available to the public until September, (hopefully in time for the Caniac Carnival), but Carolina's draft picks on June 30th will be donning the new look. 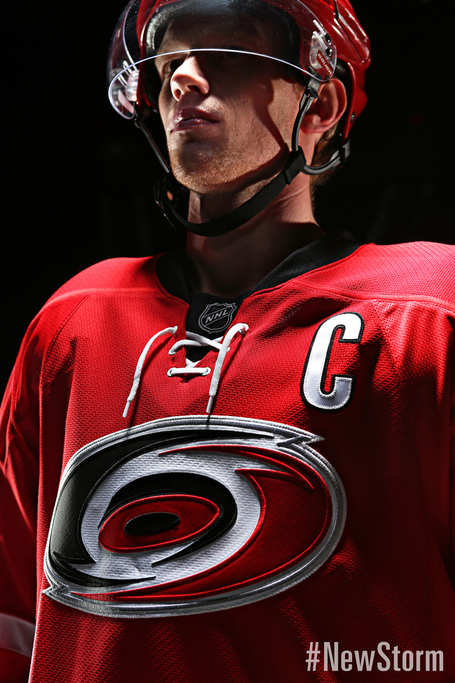 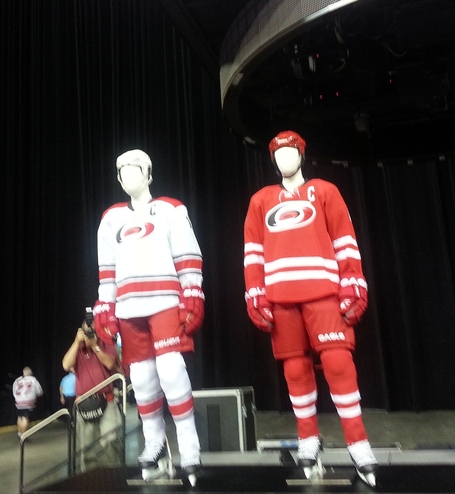 The news release follows. For decent shots of the jerseys as well as some player reactions check out this Hurricanes Video and CH.com. I will have interview highlights with a followup article later today.

RALEIGH, NC – Jim Rutherford, President and General Manager of the National Hockey League’s Carolina Hurricanes, today introduced the team’s new home and road uniforms for the 2013-14 season. While the team’s primary logo and colors remain the same, it marks the first time in the Hurricanes’ 15-year North Carolina history that they have made a head-to-toe change, including alterations to their home and road sweaters, pants and socks.

"The process of making these changes began several years ago," said Rutherford. "We are pleased with the results, and proud that our team was able to design the new look internally. Doug Warf’s staff including Ben Aycock, Andrew Roman and Lauren Baxter devoted a lot of time and energy to this process, taking input from our hockey department to create uniforms that our players love, and our fans will hopefully enjoy as well."

Several hundred uniform renderings were created and refined during a two-year period to create two distinct uniform sets designed to be classic and timeless. The major changes are outlined below.

To the red sweater:

To the white sweater:

To the pants and gloves: