John Forslund said on "Hockey Today" this morning that the Canes are looking to move a defenseman contract in order to sign a defenseman.

Share All sharing options for: Report: Hurricanes Still Looking To Move A Contract

According to John Forslund this morning, who was on "Hockey Today", the Carolina Hurricanes are looking to add a free agent defenseman, but still need to move a defenseman contract to do so.

(EDIT: I thought I heard Forslund say move a defenseman, I am told he actually said move a contract. I am sorry about that mistake.)

Last week, Jim Rutherford said that a "big name" free agent was willing to take a one-year deal in order to join his team. Most assumed that he meant a forward, thinking the general manager was pretty much done fine-tuning his blueline.

But apparently, Rutherford is still thinking about changing his defense.

There are quite a few defensemen still on the market, but there might be some argument if any of them could be considered to be so sought after that they would be making a sacrifice to take a one-year deal in Carolina.

Here is a listing of the highest paid defensemen from last season, who are still on the market, (according to Cap Geek):

From the list above, who would you like to see wearing the sightless eye this season? Many of those players struggled last season and would be looking to turn things around.

Who would the Hurricanes be trying to move out? It would seem that it would have to be someone with a big contract.

We will be talking more about this in the coming days.

The Canes announced that Elias Lindholm will meet the press today as they make an announcement during a press conference at 2 p.m. at the PNC Arena. We will have more on the event after two.

The Hurricanes development camp will start tomorrow and we will be there to bring you a variety of information. In years' past, Carolyn, otherwise known as HockeyMomof2, used to prepare information sheets that you could print out and bring with you to the rink, to help you identify the prospects. This season, Elliott James Farrell created a similar roster that you may print and share.

Simply click the following link and print as many as you wish.

Finally, once again congratulations to the winners of Brian's Stanley Cup pickem' challenge. As promised, each winner will receive a handsome Canes Country t-shirt and a Cam Ward puck. We will have other contests in the future and will try to do some game time contests as well this season.

Kudos to Eburges1, Mburgess00, and Keebler Elf. Your prizes are in the mail. 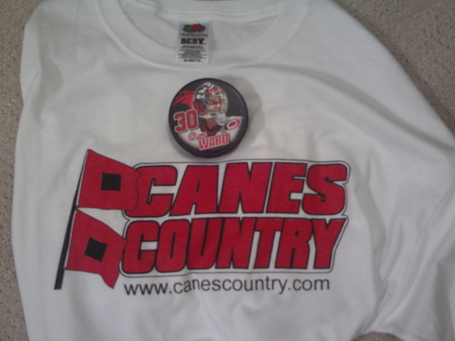