The answers to the following questions might determine whether or not the Hurricanes make the postseason this campaign.

As part of SB Nation's NHL Preview, Canes Country was sent three important questions to answer regarding the upcoming season.  Obviously, we will not have the definitive answers, but let's look at the queries and respond as best we can.

1. Does Cam Ward return to form?

Isn't this the million dollar question that most fans in Carolina are asking?

Ward is coming off a very disappointing season last year as he got off to a slow start, eventually started to play well, but then suffered a knee injury which  took him out for the rest of the season after just 17 games played.

So, after last season's step back, can he return to form?  By "form", one assumes that most people refer to the best year in Ward's career, back in 2010-11 when the goalie made almost 2200 saves and posted a career best .923 save percentage.

Can he duplicate that, or do even better? 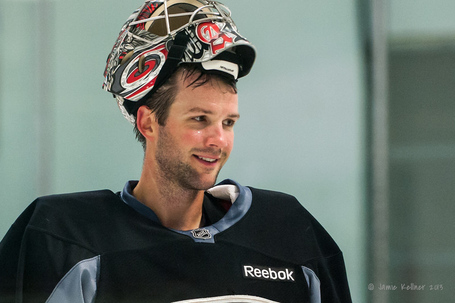 In Ward's best season, Tim Thomas made 1,811 saves and posted a .938 save percentage as he won the Vezina.

Does the Carolina net-minder need to perform to Vezina standards in order for the Hurricanes to win?

The answer is, yes he does, if the Canes continue to allow as many shots on goal as they have in the recent past.

It is no secret that the Carolina defense has performed among the worst in the league for several years.  Last season, they allowed an average of 32.2 shots per game, placing them 26th in the league.

Last year's Stanley Cup Champion Chicago Blackhawks allowed a league best 2.02 goals per game on a 26.2 shots per game average.  The runner-up Bruins came in third at 2.21 goals per game and allowed an average of 28.6.

The league's midpoint was about at 2.60 goals per game and 29 shots per game, with the better teams usually placing below these numbers and the lessor teams placing above them.

In order to match the Hawks's GAA of 2.02, Carolina's goalie would need a save percentage of .937.  (Still using the 32 shots per game average).

This is all just simple math and does not take into account any intangibles, such as quality scoring chances against, as well as goals scored which is also very important, but you can see how one stat can affect another and how important the team mentality and concept is.

If the Hurricanes team defense can reduce the average shots on goal, the team's goalie does not need a Vezina-like save percentage to keep the goals against numbers down.

Carolina took steps this offseason to improve the defense and they look to reduce that shot against average.  If this happens, I look for Ward's numbers to improve as well.

Will he match his career best numbers or turn in a Vezina performance?  That is doubtful, although he is lean and mean this camp and is greatly disappointed he was not invited to Team Canada's Olympic Camp.  He will be out to prove people wrong and that extra incentive could help drive him to a higher performance level.

More importantly though, his team's defense will have to reduce the shots he faces before fans see an improvement in the standings.

2.  Back with a long-term deal, which Alex Semin comes to play? 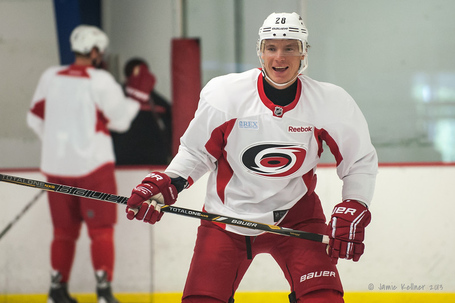 So far in his tenure with the Carolina Hurricanes, we have only seen one side of Alexander Semin.

The Russian winger, who apparently is despised by many throughout the league, has been a good teammate and has put forth proper effort in Carolina.

He has helped to bring out the best of Eric Staal's game (53 points in 48 games), and Jiri Tlusty scored a career high 23 goals as his linemate.

The line of Staal, Semin, and Tlusty was the most productive even-strength line in the NHL last season with 75 points, (results from Dobber Hockey), as they even generated more points than the second place line of Sidney Crosby, Chris Kunitz, and Pascal Dupuis, (70 points).  Most other teams were not even close.

As anyone can see from the numbers posted above, the addition of Semin brought a lot to the Hurricanes.

In the previous season, the top even-strength scoring line for the club was Tuomo Ruutu, Jeff Skinner, and Jussi Jokinen with 24 points.  Next up was Staal, Tlusty, and Ruutu with 22 points, and those totals were in 82 games, not 44 games as in the totals from last season.  (Semin missed four games due to injury.)

Eric Staal said recently in an interview that he had never played before with a player with as much skill as Semin.

The Hurricanes knew they were getting an elite shooter and prolific scorer, but "Sasha" surprised many with his passing abilities.  And not only has he been a force on offense, he has played at both ends of the rink and had a (+/-)+14, second best on the team.

Staal also mentioned that Semin wants to contribute, he wants to be a difference maker.

The Russian seems happy in Carolina and has even been seen doing somersaults after practice during informal competitions with teammate Anton Khudobin.

Which Semin will we see?  Most likely, the one we have been used to seeing.

3. How much of an impact should we expect from Elias Lindholm? 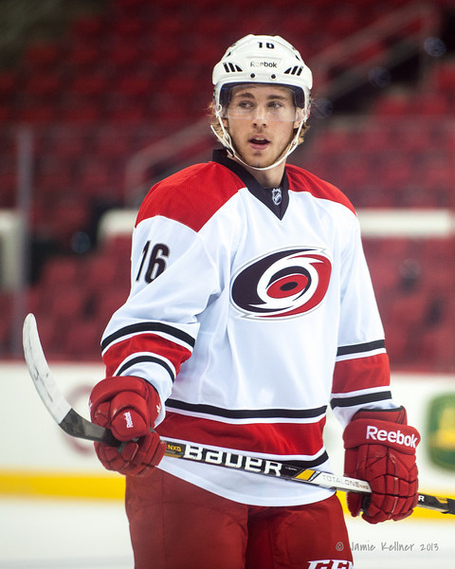 Lindholm was injured in development camp in July, (shoulder), and has seem limited action since then.  He has been held out of much of training camp, reportedly because of a "hand injury" and conditioning issue.  So far he has played in just one preseason game and did not really stand out in a positive or negative manner.

Right now, management is probably trying to decide if the rookie would be better served going back to Sweden, taking a conditioning stint in Charlotte, or staying with the Hurricanes in Raleigh.

The club was hoping that the fifth overall pick in this summer's draft could fill in on the third line and contribute with a solid two-way game, which is what he was known for in Sweden.  But we have seen very little of him in game situations, certainly not enough to determine how much of an impact he can or will make.