The Hurricanes wrap up their pre-Olympic schedule and honor their Sochi athletes tonight as they take on the Canadiens.

Share All sharing options for: Hurricanes vs. Canadiens: Game Preview 2-8-14

I wrote that on New Years Eve. At the time, the Carolina Hurricanes were 14-16-9, on pace for 78 points, and in the middle of a five-game winless streak, trying to salvage something, anything, from a season that was mired in mediocrity. And down 3-0 at the end of the second period against the Montreal Canadiens, it looked like the spiral was continuing downward.

But during the second intermission, head coach Kirk Muller, who celebrates his 48th birthday today, told his players "This could be the period that turns the season around." And so far, it has been. Since that night, and that 5-4 overtime win, the team is 11-5-0 in 2014 and is back in the playoff chase as they wrap up the first segment of the season and head into the Olympic break tonight.

Of course, that wasn't the last time the Canes and Habs played. One of those January losses was to the Canadiens, a 3-0 shutout at the hands of Carey Price on January 28th.  As key as the games between the Canes and Habs have been to date, tonight is just as important if the Canes want to enter the Olympic break on a pace that allows them to contend for a playoff spot with a post-Olympic schedule that will be compressed and road-heavy.  A win tonight would send them into the break on pace for 91 points which would keep them in sight of both the Metro division and wildcard spots.

The Canadiens come back to Raleigh victorious in a 5-2 win against the Canucks on Thursday night. Despite failing to convert on two penalty shots, Max Pacioretty logged a hat trick in the win, and Carey Price made 42 saves. Price is 3-1-1 in his last five starts, and is headed to Sochi to represent Team Canada. He will likely get the start again tonight. Travis Moen (lower body), Alex Galchenyuk (broken hand) and Michael Bournival (facial injury) did not travel with the team.  With Bournival out of the lineup, George Parros will likely return in his place.

Brandon Prust and P.K. Subban did make the trip, and are looking quite fine.

With an early start, the Hurricanes are getting an hour less of rest heading into the back end of a back-to-back series. Fortunately, jumping out to a lead against the Panthers allowed Muller to balance the lines and spread out ice time evenly. John-Michael Liles left the game early with a lower body injury and is questionable for tonight's game, but otherwise the lineup should look the same. Anton Khudobin had another stellar night in net with 34 saves, and he'll probably give it a go again tonight as long as he feels ready.  The Canes aren't skating this morning.

Probable lineup for the Hurricanes (pending status of JML):

The Canes are planning several promotions tonight to send fans into the break with a bang. Check the promotions page for all the details.

First 10,000 fans in the building get one of these bad boys. You know you want one. 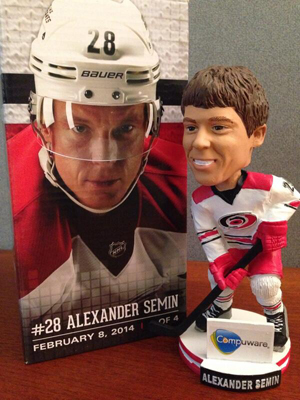 Support the Kids 'N Community Foundation by purchasing a Valentines bear, signed by a mystery Canes player, for your sweetie.

The jerseys of the four Canes Olympians (Ruutu, Semin, Faulk, and Sekera) will be on display on the concourse before the game for viewing and photos.

Now rising to the PNC Arena rafters... Have your photo taken on the ice with these banners: http://t.co/aRVABvfbk1 pic.twitter.com/lKjcJQ15w6

Don't forget the early start! We'll have the game thread ready to roll by 6:30 pm. See you at the rink.