Share All sharing options for: Canes Country Round Table Volume 7: The UFA Market

The Carolina Hurricanes will be dipping into the free agency market this off season, but who will they be targeting?

This week at the round table, we each select one unrestricted free agent that we think will help the team and give the details of the deal.  (We try to be realistic about this).

The question this week is:  Which current UFA should the Hurricanes target this offseason and why should he be a priority?  Explain the terms of the contract you would sign him at.

One of the things Carolina has been missing from its lineup over the past several years, in my opinion, is a top-notch agitator to take some of the pressure off of the skill players and change the Hurricanes’ reputation to one that's tougher to play against. With that in mind, the team’s top target should be center Steve Ott.

Not only does Ott bring that snarl and grit lacking from the Canes, but he is a capable third or fourth line center who wins faceoffs, fights when necessary, and even can score from time to time. He's not the 20-goal, 40-point player he once was, but he should be able to produce points on a similar level as Riley Nash, but also contribute on special teams.
To further up the ante on the physicality spectrum, Carolina would be wise to target Minnesota defenseman Clayton Stoner. For one, imagine the jersey sales! Secondly, Stoner brings a style similar to pending UFA Brett Bellemore but is a more willing fighter and is known for standing up for his teammates and generally isn't the type to engage in a staged brawl.

It's worthwhile for the Canes to kick the tires on veterans like defenseman Andrei Markov and center Paul Stastny, but both may prove too expensive for GM Ron Francis’ palette. Rangers center Brian Boyle is an option in the bottom six, as is Steve Downie if the team is looking for bite from its depth players.
Brian LeBlanc - Editor
One of the great failings of the Jim Rutherford administration is, with a few exceptions, he always chased after the same types of defensemen: the fabled puck-moving guy best personified in Joni Pitkanen and Joe Corvo.  Having six similar players on the blue line made it relatively easy for opposing teams to gameplan against the Canes, and left the Canes' goaltenders wide open to face a barrage of shots that would be cleaned up by more defensively solid players (Tim Gleason being the notable exception that proves the rule).
The Canes never really replaced Gleason's role on the team following his trade to Toronto, and Ron Francis' first responsibility needs to be finding someone to take that place.  The Florida Panthers' Tom Gilbert fills the role, and he should be the Canes' first target at defenseman.
Gilbert will never be confused with Zdeno Chara, but he more than holds his own.  After a forgettable stint in Minnesota where he was bought out of the final year of his contract, Gilbert signed a bargain-basement deal with the Panthers and was a more than serviceable all-purpose defenseman who was responsible defensively first and foremost while still able to contribute on the offensive end.  Gilbert's usage with the Panthers was actually quite similar to how he was used with the Oilers and Wild; in fact, for each of the last five years, he has outperformed his team average in possession stats while playing against roughly average competition.
Similar to how the Canes deployed Ron Hainsey this past season, Gilbert would fit in nicely alongside either Justin Faulk or Ryan Murphy, allowing the more offensively-minded guys to jump into the play more while still covering the defensive zone.  Gilbert would come (relatively) cheap, would fill a need and would be the kind of under-the-radar signing that paid dividends last year when Rutherford signed Hainsey.  Francis could do worse than signing Gilbert to a three year, $8 million deal. 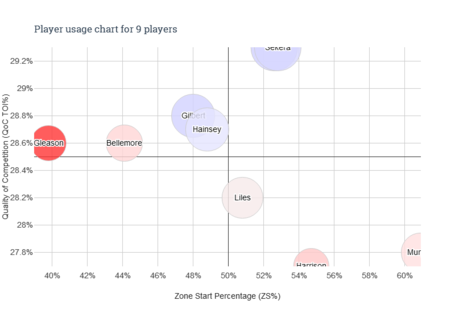 While there are a couple of interesting UFAs out there this offseason, like a Ryan Callahan, a Paul Stastny, a Matt Niskanen or even a Ales Hemsky.  If I had to choose just one that I believe would work well in Carolina and probably fit in the Hurricanes budget, I would choose defenseman Mark Fayne.

Fayne is a solid right-hand defenseman that can log some minutes, has very good possession numbers and can contribute on the penalty kill.  He has the ability to provide a little bit of offense, but that isn’t a particular strong suit for him.  Over the past 3 seasons (I adjusted the 12/13 season to an 82 game schedule), Fayne has averaged 69 games, 3 goals, 9 assists, 12 points, and Even rating, 53.8% 5-on-5 Corsi in 19:06 TOI/G.  While Fayne might not be a huge impact player that most fantasize about, I think he would fill a need in Carolina’s top 4 and he could be useful in whatever direction the Canes move toward.  He could fit with the existing group and he could be a part of a rebuilding group if that is the direction Carolina goes.

There are many places where the Canes need to upgrade, and new GM Ron Francis has his hands full.  I, and I may be alone on this, wouldn't be upset if he decided it was time to start over and looked at moving out everyone other than Jeff Skinner, Elias Lindholm, Justin Faulk, Andrej Sekera, Ryan Murphy, and Anton Khudobin.  For the purposes of this question though, I'm going to pick a UFA I would like the Canes to pursue assuming they want to contend this year.  I'm also going to assume that the Canes aren't going to use a buyout, compliance or otherwise.  I say that, because without a buyout the defense is pretty well set, especially if the Canes are able to re-sign Ron Hainsey.  So that leaves us with forwards to look at.
What do the Canes need most from a forward.  Well, first and foremost I would say versatility.  Someone that can play in multiple circumstances, and ideally in multiple roles.  You'd think I was talking about Jussi Jokinen, but I would also say the team needs toughness, and for everything that Jussi Jokinen does, toughness isn't one of those.  The team also needs work ethic.  Kirk Muller tried to stress that when he was here, and the team played well for him when the work ethic was there, but for whatever reason that message didn't seem to stick when it was coming from behind the bench.

For that reason I'm saying that the Hurricanes should pursue Steve Ott for a deal that has a cap hit in the $3.5M range.  I'd prefer a two year deal, but my guess is he will require a three-year deal.  I've put together a roster over at cap geek here:
CapGeek.com Armchair GM Roster
There is still one spot to fill, and I've re-signed Tlusty.  However, there is over $9M in cap space which leaves the team plenty of room to operate.

Ott will bring the toughness and leadership that the team needs.  He will also help the Canes go three deep at center and allow Lindholm to come along slowly in the league.  The big question will be if the Blues let him get to free agency or if they decide to keep him in the fold.

Wouldn't it be nice to make a play for Andrei Markov?  That is who I prefer, but that is but a dream.

There are a number of players who could help the Hurricanes and I agree with the choice of Steve Ott from above.  I also think a reasonable offer should be made for Mason Raymond, but I will stick to the rules and make one choice here.

The man I would go after is Matt Moulson.

Moulson had a disappointing postseason with Minnesota, but this guy has scored a lot of goals in recent years and could definitely give the offense a boost.  He scored 23 goals this season in 75 games, while playing for three different teams.  He had three straight years of 30 goals plus for the Islanders and then 15 in the lockout shortened season.

If he could gain some chemistry with one of the Staal brothers, there is little doubt he could rack up a lot of points again.  Moulson is a top six guy who has been a bit under the radar around the league and is a rare 30 goal scorer who has never earned $4 million plus per year.

He would also help out on the powerplay, something that Carolina is in dire need of.  (Five of his six goals with the Islanders last season were powerplay tallies).

While he is not known to be a physical player, he is usually sound defensively and plays a decent two-way game.

His last contract was a three-year deal paying $9.4 million.  I would offer a two-year contract at $4 to $4.5 per season and see how close we were.  There is little doubt that the Islanders would love to have him back, so the bad news is that a bidding war might ensue and I would not go much higher than that offer.

If we could not sign Moulson, I would kick the tires on Brian Gionta, Mike Cammalleri, and Ales Hemsky.  Each of these guys has seen better days and should be open to a short-term, cheaper contract than what they have signed at in recent years.

The reason for my thinking here is that the Canes need help on the powerplay.  They will not make the playoffs by continually having one of the worst powerplays in the league.