The Carolina Hurricanes held their annual media day on Thursday and more local press than ever attended.  The media relations staff started off the festivities with player interviews, then put on a strategy session with coach Bill Peters, and finally held their first ever Canes Media Cup floor hockey game, which many were looking forward to.

Each of the players I spoke to, or listened to, seemed sincere in their desire to turn things around here and they look forward to working with new coach Bill Peters.

I have some video of interviews below and will have more details of some one-on-one interviews with Harrison, Boychuk, and Malone in a day or two.  Each of them had interesting things to say.

After the interviews, we went into the locker room for a video/white board session with coach Peters who spoke to us about some of his strategy that he plans to use this season.  We were not allowed to record the session, but without getting into too much detail I will share a bit of what he had to say, (from memory).

First of all, expect to see an exciting, aggressive forecheck.  He wants one forward on the puck and another supporting him.  The third forward is expected to try to make a play, get open, or keep the puck in the zone if it is reversed to the other side of the ice.

If we gain possession he wants one defenseman skating in at the blueline, looking for an open shot.  He wants four players joining the play, always.

The coach said that none of this is secret stuff, most teams try to do it.  The ones that do it the best, or most often, are playoff teams.  He called it, playing "heavy" in the offensive zone, and it's not easy.

Peters reviewed a ton of video from last season and one of the things he wants to eliminate that he saw way too often was the cross ice dump-in.  He prefers that a player chip it to himself or send it along the wall.

"Self chips are good plays," he said.

Coach also said that he would "puke on his shoes" if he kept seeing cross ice dump-ins after preseason.  Peters also wants balanced positioning on the ice, not two or three players in the same area.   This means that someone should be in the middle of the ice, almost always.

"You have to make goalies move, that's how you score in this league," he said.

Later on, the coach was asked what separates a playoff team from a non-playoff one.

After the locker room session, the coach took the media out to the rink area and actually walked us through the formations he mentioned earlier.  A couple of guys got yelled at, but then he stated, "We're laughing with you, not at you" and carried on.

Next up, it was time for the game.

Mike Maniscalco and David Glenn were in goal for their respective teams and both made a few very good saves, but "Team Scalco" started to mount constant pressure and eventually jumped out to a 5-0 lead.

Then some guy wearing a suit decided to jump into the play. 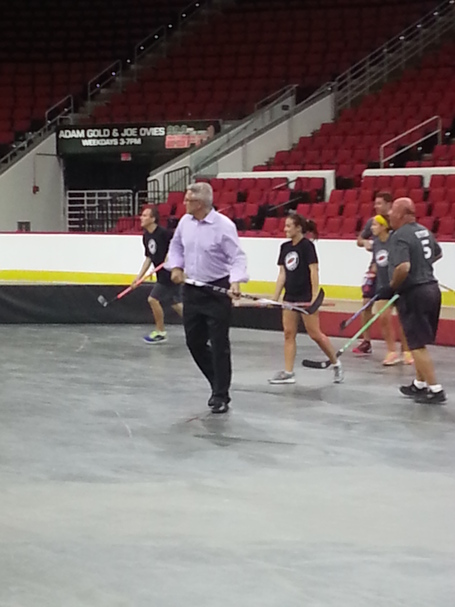 Let me tell you something, Ron Francis looked pretty good out there and it brought back memories of his ability to use his quick wrists and his stick work.

Eventually, the game evened out and was tied 9-9 before Maniscalco's team pulled ahead and won it, 11-9.

All in all, it was another positive event put on by Canes's staff which makes everyone look forward to the new season.  I will have more interviews posted as I can transcribe them.

Apologies, the video and audio below is not as good as usual. It was very crowded and there was a lot of background noise.  But some of it is good stuff.