Born and raised in the Triangle area, Logan Halladay makes a push for the NHL with stops in the USHL and Division I college hockey.

Logan Halladay's hockey career began in the suburban North Carolina town of Cary - not exactly a well-known hockey hotbed, but Halladay, an NHL goaltender prospect, still got plenty of practice honing his craft between the posts.

It was something he didn't have much choice in, as he often served as the goalie during his older brother's target practice.

"We were playing street hockey and Kyle needed somebody to shoot on, so he kind of just threw me in the net, "Halladay said.

However, his older brother's sessions gave Halladay some experience as well.

Before making the transition to ice hockey, both brothers started out playing inline hockey at a local facility in a neighboring town of Apex. Kyle soon made the full transition to ice while Logan was still playing inline. A nearby ice rink in Cary offered open rink sessions for players and goalies to attend to work on skills and do individual practice.

"I actually went to a Stick-and-Puck for the first time and I put on goalie gear to have somebody for him to shoot on," Halladay said. "A travel coach saw me in net and asked me to play on his team for the year."

After a discussion with his parents, they told him he should give it a try. If he didn't like it, he didn't have to do it anymore.

"I got thrown into it by my brother and just stuck with it," Halladay said

Soon enough, Halladay began playing goalie for the Triple-A Jr. Hurricanes.  After his 2011-2012 season with the U16 Triple-A team he was selected to play for the USA Youth Olympic team. He was invited to the USHL draft combine in 2011 and 2012, appearing in his first one at age 14. After his second showing at the draft combine, Halladay was the first selected goalie in the third round, 37th overall by the Waterloo Blackhawks. Past Waterloo draft picks include NHLers such as Andrew Alberts, Jason Blake, J.T. Brown, and Joe Pavelski.

Halladay spent last season in the North American Hockey League junior program with the Janesville Jets, but began living away from home at age 15, something Halladay admitted "makes you grow up really fast." Having to worry about the things parents typically do on a regular basis is another characteristic the lifestyle entails. "You get that experience of living on your own earlier, but you have to worry about stuff like putting meals down, and knowing when you have to eat."

Along with living away from home at a young age, the commitment to junior hockey includes a rigorous schedule. "It's a lot of adjusting to," he claimed. "You only go to school about three days a week with all the traveling." In a single season the team typically makes road trips to about 15-20 different rinks via bus and averages about nine hours of travel a week.In the past four years, he has attended three different high schools.

Halladay returns home to Cary every summer, however. Off-Season training includes a variation of workouts, but this summer included a closer step to the NHL for the then-17-year-old. During the summer the Carolina Hurricanes host a developmental camp for young players including prospects and recent draft picks.

"About two and a half, three weeks before camp I got a call from a member of the organization and they said ‘We'd love to have you out for camp," he said. "I thought it would be the right step for me in my path for development."

"I was a little bit surprised," he mentioned. "I was hoping to get a call to a development camp." This year's NHL draft didn't go as well, as Halladay went undrafted, but he is still at a young age with plenty of time to grow his game. "I knew the chance of getting called to a development camp was a reality." On the fence about whether an invite would come or not, Halladay was unquestionably grateful it was his hometown team on the other line. 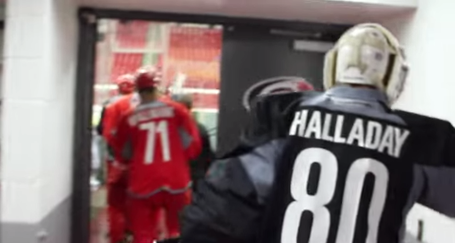 The experience as a whole is something Halladay will take back to Bloomington. "It was cool being able to measure yourself up against other players and get that elite league competition and exposure," he emphasized. Reading plays and being more aware of your surroundings on the ice was an adaption he made and plans to include in his play going forward. Also attending the camp were recent Hurricanes draft picks including Haydn Fleury, Josh Wesley, and Brock McGinn.

Within the short week that the players were given, Halladay feels confident that he was able to learn and develop throughout the brief camp.

Along with adapting to the speed of the game, positioning plays an important role in a goaltenders performance. Halladay said he focused on positioning more aggressively to take away shot angles and paying close attention to fundamentals and the ‘little things' while getting a feel for the level he will be playing at in the USHL next season.

Halladay plays a more aggressive style anyway, tending to challenge players at the top of the crease. Even he finds it a bit unorthodox. "You see a lot of goalies that are 6-3, 6-4 and I'm only 6-1 or 2, so I think I do have to play more aggressive to take away those angles," he said, "but that's where I like to use my athleticism. "I think I'm an athletic goalie and I like to use it to my advantage." Using his athleticism to compliment his aggressiveness rather than having shooters play him into in the back of the net is something he stuck with from a young age.

Back in June, USA Today Columnist Kyle Woodlief ranked Halladay as seventh out of ten goalies he thought would be selected in the 2014 NHL Draft. Specifically Woodlief mentioned Halladay's work ethic and called him a "puck-handling wizard." After this was brought to his attention, Halladay didn't spend too much time thinking about it.

"I try not to put too much thought into it because obviously they have no control over your future and I'm the only one who controls that," he said. "For me, it's cool to see that but I just have to stay focused and just focus on what I have to do to keep going and keep getting better."

For Halladay, statistics are in the same pool as a columnist's opinion. However, he does get something out of them. "At the beginning of the year I set goals for myself for what I want to get and the level I want to play at." "I understand every game isn't going to go as well as you want but at the same time, the way I look at it, is you have to learn something new every day." Taking what you learn from one day to the next is what Halladay likes to emphasize and if you can do that he says it's a "successful day." "I try and go out there and learn something new and have fun."

Though hard work is something that has been impressed in him since a young age, it's the most valuable thing he's learned from his experience. "The two things you can always control are your attitude and your effort so if you give 150 percent every time you're out on the ice or every time you're training and you have a good attitude about it, the rest will take care of itself."

The Minnesota Golden Gophers also noticed his style of play. Halladay will be a part of their Division I hockey club in the fall of 2015 after he finishes up his senior year of high school.

After his visit to the Twin Cities he said "it felt like the right place for me." While the full package is included, the fit for him on the team was what set the University of Minnesota aside from his other offers. "They recruited me because they think I fit in with their system so I just need to keep playing the way I have been playing and keep doing the things I do well," he said. "Ultimately it was a really easy decision." 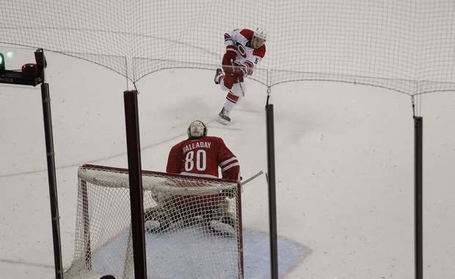 With a bright future at hand Halladay keeps his sights set on what is in front of him.

"Obviously I think about [getting drafted] but I just need to stay focused on what's in front of me in Bloomington and Minnesota and I think the rest will take care of itself," He said. "You can't really plan for the future."

Nevertheless if the opportunity were to arise it would be a "dream come true" to play for the Carolina Hurricanes - or any NHL team for that matter. He would also be happy to add a gold medal with Team USA and a Stanley Cup to those aspirations - though both of those things would be quite far in his future, and Halladay is focused on the now.

"I just need to continue to work hard, and the rest will take care of itself."