The 16-year-old barn in West Raleigh is in line for a major design upgrade.

Share All sharing options for: PNC Arena due for multi-million dollar facelift

The Carolina Hurricanes' home could look significantly different in a couple of years if a facelift plan revealed on Monday comes to fruition.

According to WRAL's Marilyn Payne, at a meeting on Monday the Centennial Authority reviewed plans for upgrades and expansions to PNC Arena, continuing a process that began last December when the Authority approved a contract with Ratio/HOK Architecture to begin designing the facelift. 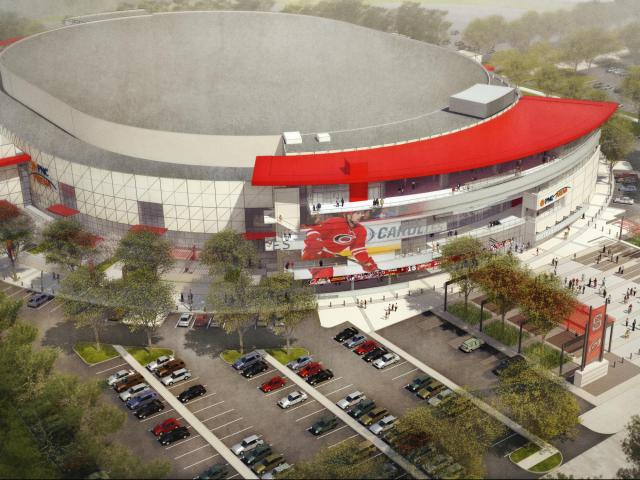 The majority of the upgrades would be focused on the non-public north entrance, home to the employee entrance and the loading dock of the building. Arena staff, currently housed on the mezzanine level of the arena, would be relocated to the north entry. The south entrance's upgrades would be mostly cosmetic, but would include a balcony seating area outside the current Arena Club restaurant.

Also included in the plans are an expansion for The Eye, a larger lobby area that will also include an N.C. State team store, and exterior enhancements to the east and west entrances to make the redesign consistent across all entrances. The seating capacity, currently 18,680 for hockey, would remain unchanged. 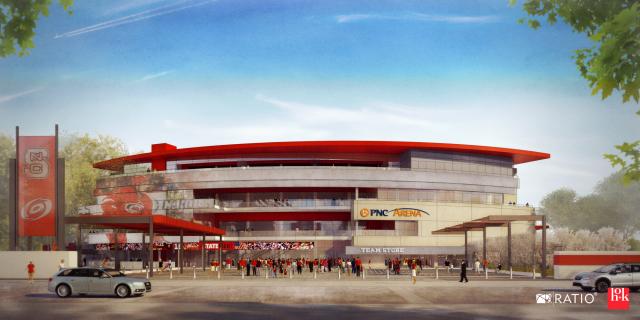 Authority board chairman Tom McCormick, speaking to WRAL, said that the upgrades "will help maintain PNC Arena as a world-class facility, positioning the region to further attract elite sports and entertainment events." In its history, the Arena has hosted the 2002 and 2006 Stanley Cup Finals, the 2004 NHL Entry Draft and the 2011 NHL All-Star Game, along with numerous concerts, mens' and women's NCAA Tournament games, annual visits of ice shows and the circus.

The plans revealed Monday are the culmination of a nearly nine-month process of design and planning that began in February. No money was appropriated for the project on Monday, nor was there a timetable given for completion of the enhancements. The construction of the arena was funded in part by a 6% hotel occupancy tax that remains in force in Wake County, but the enabling legislation of the hotel occupancy tax restricts its proceeds to construction of new facilities and not renovations of existing ones. A 1% prepared foods tax in Wake County may be used for funding renovations, however.

The Centennial Authority, which consists of members appointed by the General Assembly, N.C. State University, Raleigh City Council, the Wake County Mayors' Association and the Wake County Board of Commissioners, gave no indication about where they would consider raising the necessary funds for the renovation; however, it would not be funded out of county property taxes or local sales taxes absent specific authorization from the General Assembly.

A cost estimate will be produced when the Authority board approves the renovation plan. Hurricanes Holdings, LLC, the holding company that owns the Hurricanes and operates PNC Arena under contract to the Centennial Authority, is responsible for the day-to-day operation of the arena but cedes oversight for capital projects to the Authority directly. There is no word on whether the Canes' ownership group will be involved in financing the upgrades, as it would be asked to do so directly by the Authority board.